Momentum appears to be on Joe Natale's side.

With the new chief executive officer set to take the reins, Rogers Communications Inc. revealed a rising tide of revenue from customers and smartphone data use at the company's crucial wireless business. Mr. Natale's challenge: Turn that momentum into sustained profit growth.

The Toronto-based telecom and media company said Tuesday that it attracted 60,000 new contract wireless customers in the first quarter of 2017, beating average analyst estimates in the range of 28,000 and repeating a pattern established over the past several quarters of renewed strength in its most important division.

Rogers said revenue across the whole company was up 3 per cent in the quarter to $3.34-billion and profit increased by 28 per cent to $294-million. On an adjusted basis, Rogers earned 64 cents a share in the quarter, up from 48 cents in the same period last year and ahead of average analyst estimates of 57 cents a share.

"Wireless, our largest segment, was clearly the main contributor to these results," Alan Horn, chairman of the Rogers board of directors, said on a conference call Tuesday afternoon. Mr. Horn has been acting as interim CEO since October, when the company announced the departure of former Vodafone UK Ltd. executive Guy Laurence.

Mr. Natale, the one-time chief executive of Telus Corp., will become CEO of Rogers on Wednesday morning – at one minute after midnight, Mr. Horn joked on the call – and will also take a seat on the company's board at Rogers's annual general meeting later in the day.

That's about two months earlier than the company expected him thanks to a deal Rogers struck with Telus to release Mr. Natale from a non-compete agreement. Rogers announced the deal last week but did not disclose the terms.

In 2014 and for much of 2015, Rogers was outpaced on the wireless front by Telus and BCE Inc., but in recent months Canada's largest mobile carrier has turned to its nationwide sales network to compete more aggressively with its rivals.

"Rogers remains the turnaround story. Following years of under-performance in wireless, recent results reflect a marked turn in operating momentum. The challenge for Rogers is to now convert the turn in subscribers to accelerated EBITDA [earnings before interest, taxes, depreciation and amortization] growth," BMO analyst Tim Casey wrote in a research report Monday outlining the task ahead of Mr. Natale.

Rogers said customers are using more mobile data through family sharing plans and adding new lines to existing accounts, leading to steady growth in wireless revenue, which was up 4 per cent to $1.97-billion. Adjusted operating profit at the division increased by 7 per cent to $813-million, helped in part by a reduction in the rate of customer turnover, known as churn, which fell to 1.1 per cent in the quarter as the company managed to keep more of its existing subscribers on board.

Rogers attributed the strength in wireless results to a focus on improved customer service, the company's "higher-value offerings such as our Share Everything plans" and investments in network quality.

Those initiatives were all in place under Mr. Laurence, who was CEO for just under three years. In the months since his departure, staff at Rogers say Mr. Horn as well as Tony Staffieri, the company's chief financial officer, have also put extra emphasis on controlling spending and taking other steps to support growth in not just revenue but bottom-line profit, too.

Both executives said Tuesday that they were pleased to see revenue growth "flow through to [adjusted operating profit]."

"Importantly, robust growth did not come at the expense of profit," Mr. Staffieri said of the wireless division.

Revenue and adjusted operating profit at the cable division were both flat in the quarter, at $855-million and $392-million, respectively. The division is now propped up by its Internet service, which accounted for the majority of revenue in the period and helped offset weakness in television. Rogers is working toward the launch of a new TV platform (based on technology licensed from Comcast Corp.), but that will not be available to customers until at least early 2018.

Rogers added 30,000 new Internet customers in the first quarter, up 14,000 from the same time in 2016. But revenue increases on the Internet side were offset by the continued loss of cable subscribers. The company said it lost 24,000 television customers in the quarter. 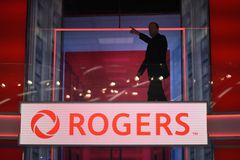