Prime Minister Stephen Harper has moved his cabinet's lone aboriginal minister into the sensitive portfolio of Environment as the government works to win crucial First Nations' support for new pipelines and other resource-development projects.

In the shuffle announced on Monday, Mr. Harper demoted former broadcaster Peter Kent to the back benches and appointed health minister Leona Aglukkaq to the critical post, where one of her first jobs will be to finalize long-promised federal regulations covering greenhouse-gas emissions in the oil and gas sector. The Conservative government is under great pressure to show it is serious about battling climate change and protecting the environment, even as it aggressively pursues energy and mining development.

Natural Resources Minister Joe Oliver, who has been the government's point man on its so-called responsible resource development approach, remains in the post he has held since entering Parliament two years ago.

Ms. Aglukkaq will be expected to take on a more prominent role as the government tries to persuade United States President Barack Obama that Canada can be counted to address emissions from the oil sands as he considers whether to approve TransCanada Corp.'s proposed Keystone XL pipeline to transport Canadian bitumen to the U.S. Mr. Kent had promised the regulations would be released by mid-year, but the government is still consulting with industry and provincial officials to reach an agreement.

The new minister will also have to face critics at home, including many First Nations communities, which opposed the recent overhaul of environmental-assessment rules and argue that the government is sacrificing environmental protection in its quest for development. Many aboriginal communities have opposed projects such as Enbridge Inc.'s Northern Gateway pipeline because of fears about oil spills and other impacts, although native leaders also acknowledge the need for resource development to provide jobs and an economic boost for their communities.

As an MP from Nunavut and the first Inuk to become a federal cabinet minister, Ms. Aglukkaq has emphasized the importance of promoting economic development in Northern Canada. In addition to her previous role as health minister, she has served as minister in charge of the Northern Economic Development Agency and this spring was appointed chair of the Arctic Council, an eight-nation group that seeks to co-ordinate policies in the Far North – both roles in which she will continue.

Pierre Gratton, president of the Canadian Mining Association, welcomed her appointment in the Environment post. "Minister Aglukkaq has a strong appreciation for the importance of mining to the North," he said. "Like many in Nunavut, she also gets the importance of sustainable development."

New Democratic Party environment critic Megan Leslie said she does not expect the government to suddenly embrace environmentalism. She said Ms. Aglukkaq showed little interest in promoting or enforcing regulations aimed at health protection during her seven years as minister in that department.

"This is an MP who represents the North. People in the North are at the forefront of climate change. Yet I have never heard her utter the words climate change, whether in the House or in other official capacities," Ms. Leslie said. "We'll see, but her track record certainly doesn't indicate to me that we are off in any new bold direction on the climate file."

But some environmentalists are more hopeful. While not expected to usher in a dramatic U-turn on policy, Ms. Aglukkaq at least could be a more forceful advocate for the environment within the government than Mr. Kent apparently was, said Ed Whittingham, executive director of the Calgary-based Pembina Institute. 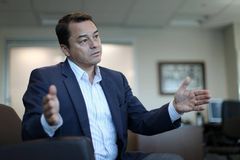