On a day that bad news gushed from Canada's dominant resources sector, Shopify Inc. delivered stellar results – its first since going public in May – bolstering its standing as an emerging global software powerhouse and the brightest star of the recovering domestic tech industry.

The Ottawa e-commerce platform company posted $44.9-million (U.S.) revenue in the quarter ended June 30, up 90 per cent year-over-year, and lost 3 cents a share. Analysts, on average, had expected the company to post $38.1-million in revenue and lose 9 cents a share. The company said gross merchandise value sold by the 175,000 retailers using its technology doubled to $1.6-billion in the quarter.

Shopify also forecast it would bring in about $182-million in revenue this year, well above analyst estimates. At that level, Shopify's revenue would surpass its 2014 tally by more than 70 per cent, after doubling in each of the previous two years. The stock closed up 11.6 per cent on the New York Stock Exchange, at $38.13, more than twice the level of its $17 (U.S.)-a-share IPO price.

Chief executive officer Tobi Lutke said on a conference call the company is trying to recapture the "idealism of [an earlier] time" when people "quite sincerely discussed the future utopia" of the Internet age before the dot-com bubble burst and bred "a lot of cynicism due to the failures of Internet commerce. Shopify thinks that this idealism of earlier time just got temporarily paused. … We see a path to reaching this potential again, as it was first imagined all those years ago."

RBC Capital Markets analyst Ross MacMillan said Shopify is "trying to disrupt the e-commerce market" by offering a fun, simple online software platform for retailers to use whether managing their websites, handling inventory or transactions on tablets in physical stores or, in the company's latest innovation, posting "buy" buttons to social-media websites Pinterest and Facebook that users can click to order goods. "They're trying to lower the barriers to commerce," Mr. MacMillan said. "That's what the company is all about."

The different initiatives are providing the company with "a lot of different levers for growth," Raymond James analyst Terry Tillman said. "Shopify is benefiting from megatrends in e-commerce and omnichannel retail," Mr. Tillman said. "They're right square in the middle of that."

Mr. Lutke said: "We feel there are a lot of people out there who have what it takes to build a great online business. They just haven't realized it yet. Internally, we hope to make starting a Shopify store as much fun as watching HBO." The company sponsors a "build a business" competition that has led to the emergence of thousands of retailers that use its platform.

As Shopify continues to grow, the 11-year-old company – which began life as an online snowboard retailer before the founders realized they could do better selling their software to other merchants – is countering some myths about Canadian tech.

The long-standing "Canuck discount" that observers have said applies to domestic tech companies compared with their U.S. peers does not seem to affect Shopify. In fact, Canaccord Genuity analyst Richard Davis said in a note that Shopify is the most expensive publicly traded cloud-based subscription software company of the 45 firms he tracks, trading at about 13 times the ratio of enterprise value to expected revenues next year.

The company has managed to outdistance its rivals here and abroad. When asked if he was worried about a new platform offering from Amazon.com Inc. called Launchpad, Mr. Lutke responded: "Amazon actually has a Shopify killer, which is called Amazon Webstore, but you can't find that any more because they shut it down."

Chief platform officer Harley Finkelstein also said Shopify enjoys two significant advantages being far from Silicon Valley: Ottawa has many locally trained engineers and much greater employee loyalty than the notoriously fickle Bay Area. "I don't echo the traditional sentiment that it's a struggle here, Canada is a tough place to build" a tech company, he said. "We're doing pretty good and we're having a lot of fun doing it." 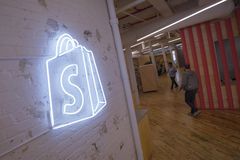 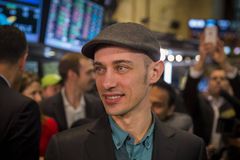 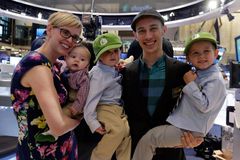 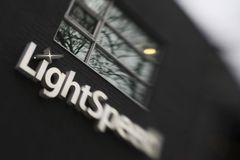 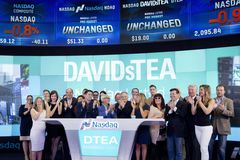