Ever since Cervantes wrote Don Quixote, the popular metaphor for taking on a tough challenge has been "tilting at windmills." Like any startup company, Global Wind Group faces plenty of challenges, but the Winnipeg firm isn't so much tilting at windmills as tilting the windmills themselves.

If you've seen large wind farms that feed power into electrical grids - or if your only image of windmills is from Dutch postcards - you picture a windmill as a sort of giant propeller spinning on a horizontal axis. Global Wind is betting on a different model - a windmill with a vertical axis and a compact shape without long projecting vanes.

This design has a significant advantage, says Justin Phillips, Global Wind's co-founder and vice-president of business development. Horizontal-axis windmills must face into the wind to work, but vertical-axis turbines work no matter which way the wind blows.

The wind itself can turn smaller horizontal-axis turbines to the right position, using a sort of rudder like a weathervane, notes Tim Weis, an environmental researcher at The Pembina Institute, an energy research group in Edmonton, but big ones have motors to point them the right way.

Mr. Phillips says vertical axis turbines are also easier on flying wildlife. While the blades of a horizontal-axis turbine can kill birds and bats, he says, a spinning vertical-axis turbine looks like a solid object and they rarely fly into it.

On the other hand, says Mr. Weis, many vertical-axis turbines need help starting up, usually from a motor wired to a wind-speed sensor that determines when there is enough wind to produce power and starts the turbine. Mr. Phillips says Global Wind's turbines don't need starter motors, though he says they do self-start at a higher wind speed than horizontal-axis turbines.

There are other issues with vertical-axis turbines on a large scale, such as difference in wind speed from the top to the bottom of a big turbine. "It's very difficult to design a vertical axis turbine on a large scale," Mr. Phillips says. So Global Wind Group is focusing on small turbines for remote communities, off-grid residences and other buildings, and telecommunications towers that need modest amounts of power for transmitters and other electronics.

Remote locations in Canada's north often rely on diesel generators for electricity, Mr. Phillips says, and the cost of shipping diesel fuel there can push the cost of the power it produces to around $2.50 per kilowatt hour (compared to ten cents or less for electricity from the grid in most of southern Canada).

Global Wind Group has designed a one-kilowatt wind turbine called the Züs that costs $10,000 to $15,000 for a complete system with storage batteries and the necessary electronics. The company has a prototype of a smaller, 300-watt unit that Mr. Phillips hopes to sell for around $1,500.

In 2007, Mr. Phillips, who formerly ran a marketing firm, teamed up with Alex Stuart, an ergonomist who is now the company's vice-president of technical development, to launch Global Wind. Their initial funding came from family and from friends and from federal and provincial grants and subsidies for technology-based businesses.

They started by reselling vertical-axis turbines from Calgary-based Windterra Systems Inc., but then decided they could produce an improved design. So they hired an engineer and started working on the Züs designs. They also brought in John Fjeldsted, a retired Manitoba Hydro executive, to serve as a part-time chief executive. "We've surrounded ourselves with the right people," Mr. Phillips says.

The decision to develop their own turbine seems to have been prescient, since Windterra ceased operations in spring 2010. There have been a few problems with early installations using the Windterra equipment.

In Rosenort, Man., Global Wind put four turbines on the roof of a garage owned by the rural municipality of Morris. They produced electricity all right, says Ralph Groening, the municipality's reeve, but they also produced noise - lots of it. It seems the steel building amplified the vibration from the windmills. Mr. Phillips says Global Wind is moving the windmills from the roof to freestanding poles at its own expense.

Mr. Groening hopes the turbines will be back in operation this fall, but it's too early to tell how much they're saving the municipality. "We haven't really been able to answer that question," he says.

Global Wind installed its own Züs turbines in a limited-time test installation in Ahmedebad, India, but Mr. Phillips says that trial has been completed and the turbines removed. The original location lacked sufficient wind, he says, and Global Wind hopes to install the turbines at another location nearer the coast.

Mr. Weis says small wind turbines are at a disadvantage compared to bigger ones because they are closer to the ground, while there is usually more wind at higher altitudes. So choosing just the right site is critical for small turbines, he says. Because the electronics associated with them draw some electricity, one British study found some poorly-sited turbines to be net energy consumers.

Global Wind's turbines have also been tested at the University of Manitoba's Alternative Village, a research site focused on alternative energy and building materials. Though the urban site is not ideal for wind power, says Kris Dick, associate professor of bio-systems engineering and organizer of the Alternative Village project, "I think they work quite well. The thing that I notice most is they don't mind the type of wind."

Global Wind's founders are awaiting Canadian Standards Association (CSA) approval for their turbines. Last fall the Canadian Innovation Exchange in Toronto included them in its annual list of Canada's hottest innovative companies. And in May they're due to appear on the CBC Television program Dragon's Den, seeking money to market their technology and deliver it to larger customers. The outcome of that pitch may show which way the wind is blowing for this startup. 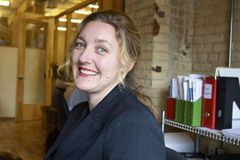