The latest news and information for entrepreneurs from across the web universe, brought to you by the Report on Small Business team. Follow us on Twitter @GlobeSmallBiz

A new Toronto-based accelerator program has launched with $7-million in funding to help startup technology companies, according to this announcement.

Extreme Startups, a rebranded and expanded version of the Extreme University accelerator program that had been founded by early-stage venture capital investment firm Extreme Venture Partners, will offer 10 companies a year, split into two cohorts, up to $200,000 apiece in funding. They will also get exposure to investment firms, mentors and weekly "startup school" sessions.

"Extreme University ...has been a successful breeding ground for the new generation of technology startups. Building on this success, we are expanding into a year-round program and providing promising entrepreneurs with even deeper access to funding, industry connections and mentorship," said Extreme Venture Parnters co-founder Amar Varma in the release.

Serial entrepreneur Daniel Debow, who sold out his company Rypple Inc. to Salesforce.com in December, and previous to that Workbrain for $230-million, will join the first cohort as the "entrepreneur link," giving participants a real-world perspective.

The accelerator will be taking applications between now and March 1, for the first session which begins on March 19.

Although they make up nearly half of Canada's workforce, women still remain under-represented as entrepreneurs, which hasn't changed much over a decade.

But prospects are brightening for women and, "although women may remain under-represented among entrepreneurs for quite some time, we likely haven't seen the peak in their desire to become an entrepreneur," according to a new report from TD Economics.

The report notes that female-run businesses tend to be smaller and have slower revenue growth than those run by men, suggesting that's at least partly because they cluster in slower-growing service industries -- the no. 1 industry for self-employed women in Canada is health care and social assistance. The report also points to evidence that they may not seek enough financing to grow their businesses.

As well, they have different motivations for starting a business, as well as a greater aversion to risk and a stronger emphasis on work-life balance, according to the report by Beata Caranci, vice-president and deputy chief economist for TD.

Still, she suggests there may be brighter prospects ahead. For one thing, she notes, women's lower-risk taking behaviour does not affect profitability, saying that even if the genders approach entrepreneurship with diferent agendas, "women entrepreneurs are no less savvy in managing their businesses."

As well, she notes that women are much more educated than previous generations, deepening the talent pool for future business ventures. She also notes recent surveys that show the percentage of female-owned businesses intending to expand has increased -- in fact, higher than men -- as have the percentage seeking and getting financing, "which bodes well for future growth."

They're huge, they're extravagant, they're memorable, they're from the giants of consumer companies -- "they" would be the advertisements at SuperBowl.

This year, there will also be one perhaps more unlikely ad: one dedicated to entrepreneurs from the Ewing Marion Kauffmann Foundation, an entrepreneurship advocacy organization, according to this posting from The Washington Post.

"The next great entrepreneur is out there. Will it be you?" asks the 30-second spot, which tells viewers that a great entrepeneur "can change the world." The ad will air in New York, Washington, San Francisco and Kansas City, according to the Washington Post.

"The most-watched television event of the year is the ideal opportunity for Kauffman to inspire entrepreneurs and, in the spirit of Super Bowl advertising, to do so in a fun and accessible manner," the posting quoted Wendy Guillies, Kauffman's vice president of communications, from a statement.

The top five finalists in each of six categories for the 2011/2012 Successful You Awards, sponsored by Small Business BC to recognize and celebrate contributions of British Columbian entrepreneurs, have been selected, . Finalists will now have an opportunity to make a 10-minute pitch to judges, and the winners of each category will be announced at an awards ceremony to be held in Vancouver on Feb. 28. For tickets and other information about the awards ceremony, which is an opportunity to mingle with other entrepreneurs, small business owners, and other industry professionals, click here

For mid-sized companies, Spara Partners Capital Inc. is presenting an event to look at the "art and science of growing, financing and selling your business." A group of expert panelists will deliver insights about what private equity firms look for in potential investments and how to prepare a company for sale; financing options for companies looking to borrow ; and share experiences from those who have sold sized businesses. The event takes place Feb. 28 in Toronto. For more information, click here.

Back in December, we introduced you to some of the enterprising owners of Toronto's young entrepreneurs scene. They, too, have big ideas and ambitions.

Got a tip on news, events or other timely information related to the small-business community? E-mail us at yourbusiness@globeandmail.com 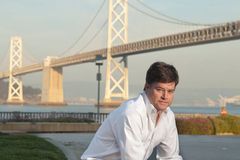