When private equity group Stern Partners Inc. bought OUTtv Network Inc. last year, the future of the specialty cable channel focused on the LGBTQ community was staked on the internet and expansion outside of Canada.

The Vancouver-based OUTtv had just launched OUTtvGo, a streaming service. The $4-a-month product has been available only in Canada and OUTtv Network plans to launch it internationally in early 2018.

The United States is the No.1 market the company is going after – but the strategy has been complicated by the U.S. Federal Communications Commission's move to end net neutrality, the rules that are meant to ensure all web traffic is equally available so users have access to an open internet.

Potential risks for OUTtvGo run from being blocked outright – LGBTQ content isn't embraced across the United States – to having to pay a fee for network access for the service, said Brad Danks, chief executive of OUTtv Network. The company is pushing forward, as the United States is too important to forsake, but Mr. Danks has girded for slower-than-predicted growth.

"It could potentially affect everything that we do," he said. "It creates uncertainty. I don't know what that world looks like."

The FCC has faced criticism from Democrats, Hollywood and major technology companies, who urged FCC chairman Ajit Pai, a Republican made chairman by U.S. President Donald Trump last January, to keep net-neutrality rules introduced during Barack Obama's presidency in 2015. They barred service providers from blocking, slowing access to or charging more for certain content. The FCC said its decision aimed to "restore internet freedom" but it was widely seen to benefit the few large cable and telecom companies that own the communications networks.

The new rules give internet service providers sweeping powers to change how consumers access the internet but must have new transparency requirements that will require them to disclose any changes to consumers. The Canadian government, meanwhile, backs net neutrality here.

"Net neutrality is one of the critical issues of our times, much like freedom of the press and freedom of expression before it," Innovation Minister Navdeep Bains said last Thursday after the FCC decision. "That's why our government has a strong net-neutrality framework in place."

The big change in the net-neutrality debate over the past several years is that the internet giants such as Google's parent Alphabet Inc., Facebook Inc. and Netflix Inc. are less outspoken on the issue than they once were, as they have amassed their own considerable power and wealth. Netflix earlier this year said net neutrality was no longer its primary battle.

Smaller companies could face challenges, as U.S. internet service providers experiment with priority access to their networks, said Michael Geist, Canada research chair in internet and e-commerce law at the University of Ottawa. "It's a real risk," he said. "It won't happen next week or next month but we are likely to see some next year."

Smaller online video services are an obvious target, Mr. Geist said, given that companies in the area such as Netflix and Amazon could afford to pay more for priority network access if they are pushed. But in this situation, smaller online video service companies who are not in the so-called fast lane of a network could lose subscribers. Viewers typically do not stick with a video that becomes stalled.

"Smaller players may get stuck on the slow lane," Mr. Geist said.

Another potential example are the many small firms that use Shopify Inc., one of Canada's top internet companies. Shopify sells software for upstart online merchants. Fees to access the fast lane could be onerous for a small retailer.

Companies such as Slack Technologies Inc. and Kik Interactive Inc. declined comment, and Hootsuite Media Inc. didn't respond to a request for comment.

At OUTtv, Mr. Danks said the focus for growth remains fixed beyond Canada's borders. "We recognized our business was much better as a global business than a national business," he said. The company has about 1.1 million cable TV subscribers, a figure that is ticking downward as some Canadians eschew cable. The channel's most popular show is RuPaul's Drag Race, which is also on OUTtvGo.

Mr. Danks has worked to sell OUTtv content elsewhere, such as through Apple Inc.'s iTunes, and in deals overseas, including one that is nearly complete in South Africa. OUTtvGo will be profitable once it cracks 50,000 subscribers, he said, adding that "we are well on our way" in Canada to that mark. Because profitability doesn't require hundreds of thousands of customers, he noted expansion beyond Canada is easier because modest gains add up without the risk of having to score a large audience right away.

He sees the streaming service OUTtvGo becoming the company's driver. The United States will be a main focus next year, even with the net-neutrality changes, and OUTtvGo will also reach other similar markets such as Britain and Australia.

"The U.S. market is important," Mr. Danks said. "But if we get blocked [in certain places], we'd have to refocus. It would make it harder."

The end of net neutrality may be particularly worrisome for OUTtv because of its LGBTQ content.

"There's a more hostile environment in certain segments of American society," Mr. Danks said. "It exists in Canada but most of our hate mail is from the United States. I got an e-mail this morning that wasn't too pretty."

What the U.S. net-neutrality repeal means for Americans and Canadians
December 15, 2017 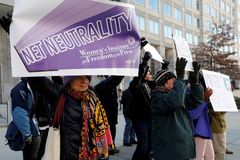 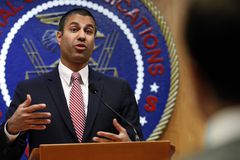