Tim Hortons franchisees knew price increases on some menu items were coming, but the slight bump on breakfast menus the company confirmed Friday falls short of the 10 per cent across-the-menu hike those grappling with Ontario's minimum wage hike feel they need, according to a franchisee association source.

"Regular adjustments to menu prices are a normal part of the restaurant business," the Oakville, Ont.-based company said in a brief statement, making no connection between the move and the minimum wage controversy that's landed the chain in hot water.

A source from the Great White North Franchisee Association, a group not sanctioned by the company that aims to voice the concerns of the roughly half of Canadian franchisees it represents, confirmed RBI announced the price adjustment to franchisees weeks prior.

The adjustments vary by area, the source said, but were added to a handful of items – mostly breakfast combos – and prices went up about 20 cents in many regions.

The timing of RBI's internal announcement indicates it has not bowed to mounting pressure from some franchisees, an industry group and the public to resolve how some store owners handled a 21 per cent jump in Ontario's minimum wage, which kicked in Jan. 1.

Some Tim Hortons franchisees in the province eliminated paid breaks, fully-covered health and dental plans, and other perks for their workers. The changes came to light after a letter from the owners of two Cobourg, Ont., franchisees circulated on social media.

Those franchisees and the GWNFA partly blame RBI, which controls pricing, for refusing to help franchisees stomach the $2.40 jump in minimum hourly wages by boosting what they can charge for food and beverages, among other requests.

The GWNFA source says franchisees want menu prices to go up by about 10 per cent across the board in Canada.

The association estimates the minimum wage hike and other changes to the province's labour laws will cost the average franchisee $243,889 a year. The calculation assumes an extra $3.35 hourly per employee, which also includes costs such as increased vacation pay.

RBI denounced the actions taken by some franchisees and has said its committed to helping restaurant owners work through the changes. The company has declined to answer questions on how it intends to do that. It did not immediately answer requests for comment after issuing an initial statement Friday.

Angry consumers have targeted both the parent company and the franchisees, taking to social media and encouraging others to #BoycottTimHortons in an effort to put pressure on either group to reverse the changes. Protesters also gathered outside Tim Hortons locations across Ontario this week.

The Ontario Federation of Labour, an umbrella group for workers and their unions in Ontario, called on RBI's chief executive Daniel Schwartz to take immediate steps to ensure his franchisees comply with and respect the spirit of the province's labour laws.

The dispute over employee wages and price hikes is the latest round of finger-pointing in an ongoing blame game between some franchisees and their corporate parent. They have publicly sparred over alleged mismanagement and filed several lawsuits against each other in recent months.

Tim Hortons appears to have last adjusted prices Aug. 2, 2017 when it boosted what it charges for hot beverages and breakfast items.

The last known prior price increase was in 2014. 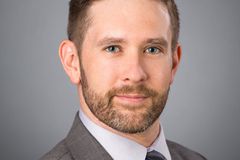 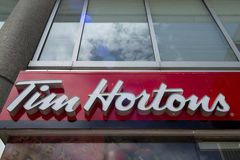 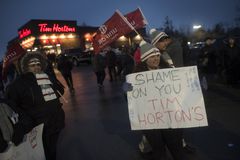