For the first time in years, the global mining industry's annual extravaganza has rattled into life surrounded by what looks suspiciously like a bull market.

Many commodity prices, from copper to zinc, have rocketed higher in recent months. Share prices have followed suit, and attendees to this year's Prospectors & Developers Association of Canada (PDAC) convention in downtown Toronto no longer bear the dazed look of accident survivors.

But, even so, the opening day of the industry's big bash on Sunday still struck a wary tone. Organizers expect 22,000 people to attend the show, which runs through Wednesday. That is roughly the same number as last year, but it is far below the 30,000 who flooded through the doors at the height of the commodity boom in 2011.

In happier times, the convention prided itself on being the spot for both hard-drinking parties and non-stop deal-making. It has become a more sober, restrained affair in recent years as the industry has struggled through a prolonged bleak patch.

Attendees to this year's convention welcomed signs that the sector's long ordeal is finally over, but nobody was declaring victory just yet.

"There's definitely optimism here, but it's of a cautious sort," said Paul Robinson, a director at mining consultants CRU Group in London, and a speaker at the conference.

The surprise pick-up in mineral prices in recent months was based largely on China's unexpected economic vigour, with an assist from U.S. President Donald Trump's pledge to spend a trillion dollars on infrastructure, he said. The problem is that neither the Asian giant nor the U.S. President are a sure bet to keep on giving.

China, which consumes about half the global output of many commodities, remains the biggest uncertainty, Mr. Robinson noted.

He said Beijing's decision in recent weeks to curtail aluminum production as a way to help ease air pollution is a positive signal because it indicates the Chinese government feels confident enough about the underlying economy to take the risk of throttling back on a key employer.

But skeptics warned that governments in Beijing, Washington and elsewhere are hard to predict. "One common factor for most [metals markets] is the outsized near-term importance of highly uncertain politics and policy," Rory Johnston of Bank of Nova Scotia cautioned in a note.

Until the global trend becomes clearer, many miners are content to bide their time. However, unlike a year or two ago, when all the emphasis seemed to be on buttressing balance sheets, a growing number of companies are at least considering expansion.

"We're being asked to talk to clients about a lot of the big projects that were put on hold back in 2012 and 2013," said Dave Lawson, president of the global mining and metals market for Amec Foster Wheeler, an engineering consultant and project manager. "People are dusting off those projects and taking a new look at them … redoing the calculations and rethinking the economics."

A slower industry has resulted in cheaper labour and more competitive bids on everything from construction to manufacturing, he said. Thanks to the improving cost picture, Mr. Lawson's group has shaken hands on – although not yet officially booked – more than $300-million (U.S.) of new business in the first two months of the year, he estimated.

While big players mull a return to megaprojects, many smaller companies are paying an unusual amount of attention to minor metals, such as lithium and cobalt, where the case for buying is less about the global economy and more about technological trends.

Both lithium and cobalt are used in batteries and a host of promoters on the convention floor are delighted to assure passersby that demand for the metals can only climb as smartphones and electric vehicles become more popular.

Visitors who aren't in the mood to invest in a junior lithium play can check out the comparative merits of a host of mining jurisdictions, from Greenland to Mongolia, that are using the show to pitch their unique virtues.

One of the more intriguing presences at this year's show is Brazil, which is seeking to reinvigorate its mining sector by cutting red tape and opening up many previously restricted areas to foreign investors.

Fernando Coelho Filho, Brazil's Minister of Mines and Energy, is in Toronto to talk to miners and assure them that he intends to remove many of the bureaucratic obstacles to winning a mining permit.

"Our bureaucracy has been very tough to go through," he said. "We know that. And we're going to improve." 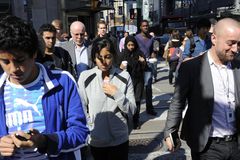