It started with a ski trip. Now it is a $20-million company.

Jas Brar was an 18-year-old undergraduate at the University of Toronto. His buddy was going to school in Montreal, and needed 500 customized T-shirts for a group ski vacation. 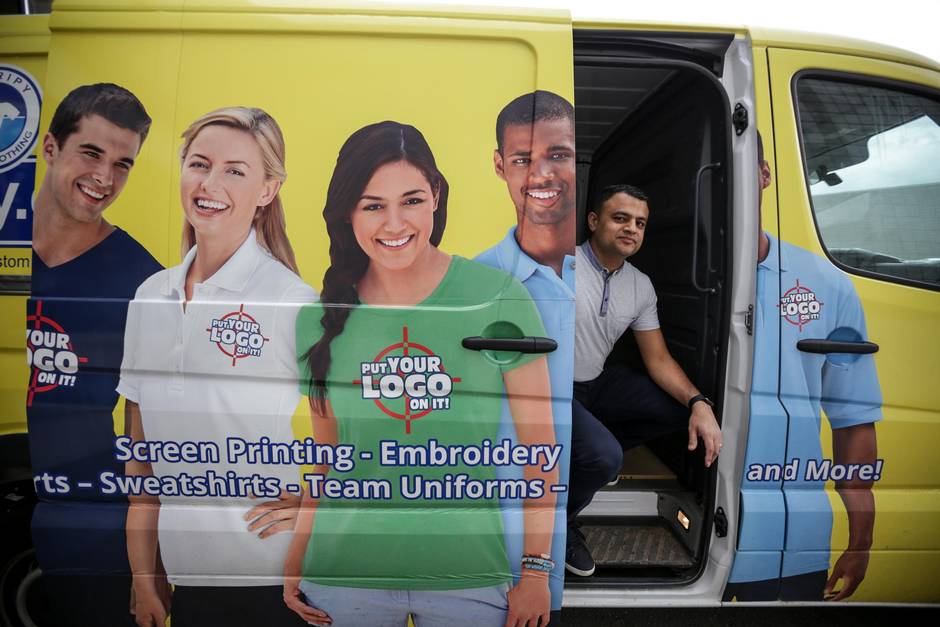 Jas Brar, now chief executive officer of Entripy Custom Clothing, started out frustrated at how low-tech the screen-printing business was. So he started investing in technology. (Glenn Lowson/The Globe and Mail)

Mr. Brar cracked open the phone book. He found a shirt wholesaler in Toronto’s North York suburb, and a screen-printer in nearby Mississauga. After driving the shirts all over the Greater Toronto Area, he hired a courier to get the finished garments to Montreal.

The year was 1999, and Mr. Brar found the entire experience frustratingly low-tech. “I very quickly realized that screen-printing – and embroidery and custom apparel – was a very old-school industry,” the now 36-year-old recalls with a wry laugh. “They were still using carbon paper to write out the order.”

Even so, all that running around earned Mr. Brar a buck a shirt.

Mr. Brar built a website, the first in a series of tech-forward decisions that would see his company, Oakville, Ont.-based Entripy Custom Clothing, grow from a dorm-room side hustle to a medium-sized business that now does $20-million in annual sales and has experienced double-digit percentage growth every year for almost two decades, according to the company.

The Entripy site was the first in Canada to provide online quotes for custom apparel orders. E-commerce, however, was still in its infancy; Mr. Brar may not have been using carbon paper, but he still had to phone customers to get their credit card information. 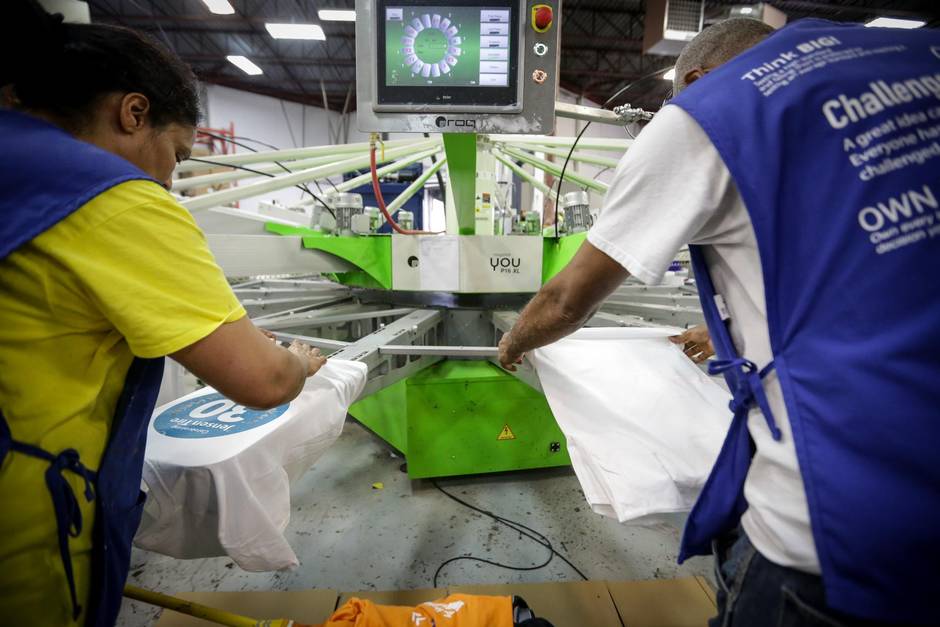 Staff at the Entripy Custom Clothing factory location in Oakville, Ont., use a computer controlled screen printer, which can print up to 13 different colours in one pass. (Glenn Lowson/The Globe and Mail)

As the site started attracting more and more orders, “I realized, to make the experience better, I needed to print the shirts, to control the supply chain.”

After finishing his first year at university, he paid $10,000 for a 20-year-old, hand-operated screen-printing press. He installed it in his parents’ basement. When he needed help filling large orders, he plied friends with pizza and beer.

“There’s always tension between firms that produce content and merchandise, and firms that distribute,” says Robert Carroll, a professor and program co-ordinator of the marketing analytics program at Seneca College of Applied Arts and Technology in Toronto.

“Much of the power that’s held in this economy is in the distribution function; the Apple store probably makes more money than the app developer. What [Entripy] seems to have been able to do is be right at the point of contact with the end consumer; they’re not just manufacturers who are being mediated by some other distribution channel.”

Mr. Brar’s next operational investment came after he saw an automated screen printing press at a trade show in Atlanta. The new press allowed Entripy to do faster, more efficient, higher output. “That was step one in terms of taking production and operations to the next level.”

After graduating, he devoted himself full-time to Entripy and hired his first real employee. “That’s when I was able to accelerate the growth a little bit.” By 2007, Entripy employed upward of 15 people and had outgrown not only the Brar family basement, but a few other locations. The company had just made its latest move, from a 5,000-square-foot facility to a 16,000-square-foot space. They had built up their equipment, and had a good Web presence. 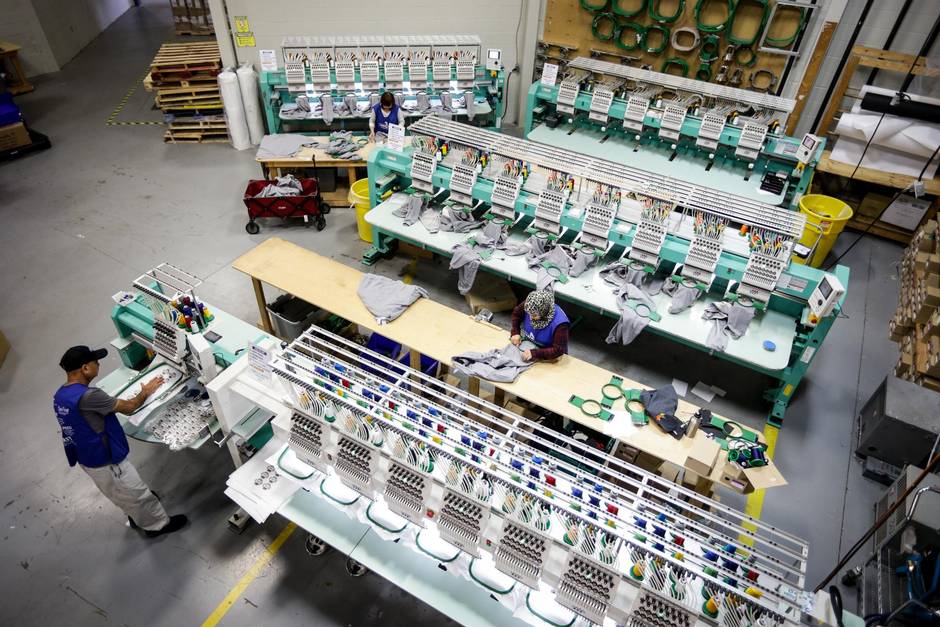 What started out as a one-person business in his parents' basement is now heading toward a 50,000-square-foot space in Oakville, Ont. (Glenn Lowson/The Globe and Mail)

“This is our chance,” Mr. Brar thought. “We started with [investing in] technology and that allowed us to be a small business that grew. To get into that next space, to make the move from being a small business to a medium-sized business, we’ve got to get back to those roots and take that technology to another level.”

In order to create a client experience “with the least amount of friction possible,” Mr. Brar hired full-time in-house developers, both to work on the client-facing Web experience and the internal production applications.

“There were off-the-shelf [IT] products for print shops,” he admits, “but we weren’t just a print shop, we were a solution provider. So we built everything from scratch. From the time the customer gets our advertisement to when they get the finished goods, we wanted to automate every single step. That was what we needed to grow.

“The key for me was understanding that heavy investment in technology, from all angles, was going to allow me to the scale to grow the company. That was the big a-ha.”

The investment paid off, with the company growing into a mid-sized business. “We’re able to jump exponentially because of having that technology in place. We’re not bringing on three more people to grow 3 per cent. We’re able to keep adding people, but our growth is outpacing the cost of adding those people.” 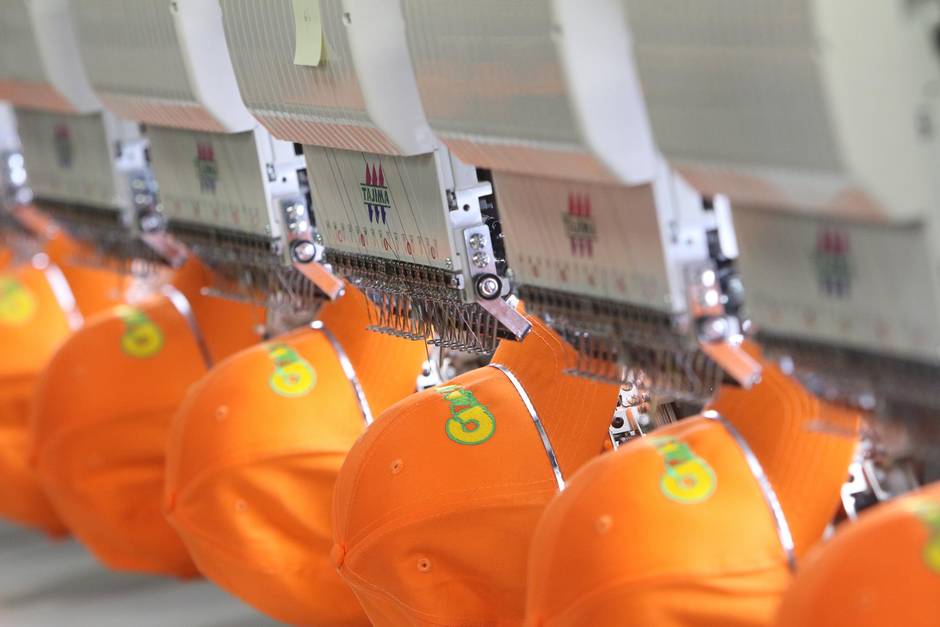 In order to move to a mid-sized business, Mr. Brar invested in technology, moving from building a web presence and buying an automated screen printing press to developing IT that fully automates the paperwork. (Glenn Lowson/The Globe and Mail)

For many small businesses, notes Lisa Larter, a Nova Scotia-based sales and marketing consultant, it is not the decision to add staff that is difficult – it is figuring out who those people will be, and what they will do. She says that, just as people can grow into new roles, sometimes the opposite can happen: What was a good fit during early days can stop working as a business expands.

“Something else I’ve seen with a lot of companies that I’ve worked with is almost a sense of self-preservation among people on the team; they don’t want to let outside help in because they feel like it somehow diminishes their contributions to the company.”

There are, however, ways a leader can help its team through such growing pains.

“One of the things you can do from a leadership perspective,” says Ms. Larter, “is have conversations with the team about the direction of the company. Do you know what the company looks like when it’s a $10-million organization? Or $100-million? What does the org chart look like? Is compensation tied to hierarchy, or is it tied to the best people doing the right job? Communication, and having a vision of what the company will look like as it continues to grow, is key.” 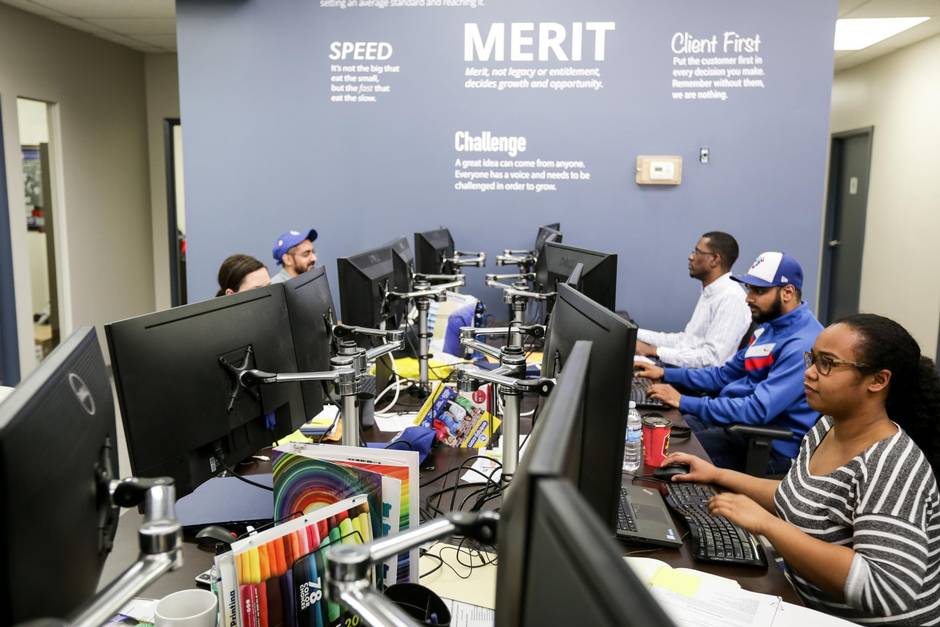 As Entripy grew, Mr. Brar focused on hiring developers, marketers, production staff and a client-experience call centre, rather than sales people. 'Nobody goes out and knocks on doors. It’s through marketing with analytics and data that we drive that. With technology, you can knock on thousands of doors a day.”(Glenn Lowson/The Globe and Mail)

It is a point of pride for Mr. Brar that, even as the Entripy work force continues to grow, it still does not have a sales team – or a single salesperson. “Our human capital is used on developers, on marketing, on a client-experience call centre and on production. Nobody goes out and knocks on doors. It’s through marketing with analytics and data that we drive that. With technology, you can knock on thousands of doors a day.”

Seneca College’s Prof. Carroll says that, although this data-driven online marketing approach was commonplace 15 years ago in sectors such as banking and telecommunications, “Now you’re seeing it spill over into retailing because they’re recognizing the power of data and they’re shifting their business processes so they’re capturing more data earlier and exploiting it.”

He adds: “All of this works around getting the right question, and then getting the right data to answer the question. Sometimes firms will just answer the questions that their data can answer. The right way to do it is to think of the appropriate question and then pursue the data that will allow you to answer it. Then you can hit the data with the right analytical technique, interpret the results correctly, and then explain the insight so that management is willing to take action. Then you have to execute it at scale, doing it over and over again, more quickly and more reliably. There needs to be a feedback loop that allows you to learn from prior experiments, so that future offers are more targeted, more relevant and more profitable. Test-and-learn is absolutely paramount.”

Entripy fills orders ranging from “10 T-shirts for a bachelor party, to 10,000 for a campaign, or 100,000 for beer cases. We can treat those the exact same way, without losing any efficiency. We can scale every order up.” 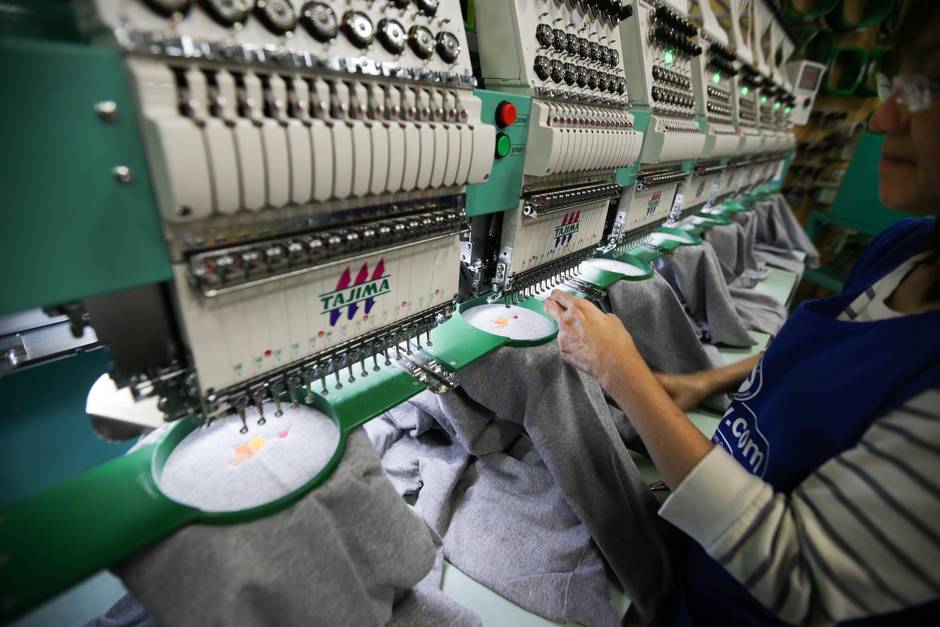 With investment in further technology, such as building microsites for schools and community sports teams, Entripy sees itself 'as a technology company, first, that has all of our production in-house.' (Glenn Lowson/The Globe and Mail)

Entripy also creates infrastructure for clients. They built microsites for more than 500 schools, allowing parents and students to order one-off, on-demand customized spirit wear (apparel branded with school crests). The company recently integrated the apparel programs for a network of 1,000 small community sports teams that are spread out across the country. For a national restaurant chain (Entripy has non-disclosure agreements with its clients), they created a Web platform that allowed every employee, from hundreds of franchises, to log in and customize their own uniform.

Mr. Brar believes that such complicated projects would be unthinkable had Entripy not invested in developing IT that fully automates the paper work: Each order goes right from the Web into the enterprise resource planning (ERP) system, which automatically sends purchase orders to suppliers, instructions to the graphic and production teams and, ultimately, shipping instructions for the finished garment. “Not a single person had to touch that transaction, they just had to do the physical work of creating the product and getting it out the door.”

“Most people focus on the big names – and we have those clients, too." For instance, Entripy has partnered with Maple Leaf Sports and Entertainment Ltd. and is the official custom apparel partner of the Toronto Raptors basketball team. “But when you bring together thousands of tiny clients, the volume is massive. We’re able to bring together thousands of orders in a week – the forgotten clients who are ordering 10 or 20 shirts – and bring them together for a massive aggregate volume. That’s what really drives things. And technology allows us to do that.”

Technology is a continuing reinvestment. The company is in the process of expanding its Oakville facilities to just more than 50,000 square feet to accommodate new digital printing technology that will be fully integrated into the front-end consumer experience.

“There are big things coming,” says Mr. Brar of what he calls Entripy 3.0. “That’s why we think of ourselves as a technology company, first, that has all of our production in-house.”