When Steve Irvine headed Facebook Inc.'s marketing partner program, he met dozens of top Fortune 500 CEOs eager to learn about the latest technology trends. "The number one question [they had] was … "Who's the Uber of my industry that will disrupt me?'" he says. "And, 'What new technology advance will they use to facilitate that?'"

The second question was easier to answer: Artificial intelligence. The deployment of smart algorithms that could learn from troves of data and make decisions automatically was being touted as the future by visionaries such as Elon Musk and Stephen Hawking. It was already used by some of the smartest consumer Web firms including Google, Facebook and Netflix to tailor recommendations to users.

Mr. Irvine wondered, what if the rest of corporate America could use AI to bring similar experiences to their customers? "That got me thinking, 'This is a good opportunity to build a business,'" he said.

What happened next is the buzz of Canada's technology sector. Canadian-born Mr. Irvine decided to start his new AI company, Integrate.AI, in Toronto, not out of domestic pride, but because the city is emerging as one of the globe's hottest AI hot spots, thanks in part to the cutting-edge talent that has poured out of University of Toronto.

Even more notable, however, is the news that the 38-year-old Mr. Irvine has raised $5-million (U.S.) in seed financing, not from the likes of Google or Microsoft – which have been actively funding AI-related institutions and startups in Canada and snapping up companies and engineers here – but from a Canadian investor.

That backer's identity will surprise denizens of Canada's teeming startup sector: Toronto-based Georgian Partners, Canada's most sophisticated and renowned independent venture capital firm, which only backs "growth stage" companies that already generate millions of dollars in annual revenue. Integrate.AI is little more than a founder with a thesis; Mr. Irvine hasn't even hired a chief technology officer yet.

But Georgian Partners managing partner Justin LaFayette said while talking last fall to Mr. Irvine – a fellow board member at Georgian-backed startup Polar who had started two companies before his six-year stint at Facebook – they both realized there was a massive opportunity for a company to emerge as the "de facto standard" to help Fortune 500 companies use AI to change the way they interact with customers.

"This is a billion-dollar-company opportunity, which is the reason we're so excited," said Mr. LaFayette, whose firm has become one of North America's most active venture investors in the AI space in the past two years.

"Our view is that the type of experiences the Googles and Facebooks have built for people is what everyone expects everywhere," Mr. LaFayette said. "All of the corporate world will have to get there. I think that's too obvious an opportunity for more organizations not to pursue it…[and] it will be a race of necessity for scale and size to be the winner."

Mr. LaFayette also stressed this was a "one-off" investment: "We like the growth equity market we're in."

Global market research firm International Data Corp. last October forecast that revenues from "cognitive systems and AI" will surge to $47-billion (U.S.) in 2020 from $8-billion last year, with banks and retailers leading the way on spending.

The core idea behind Integrate.AI is to marry the data that corporations gather from customers with giant data sets available from consumer Internet companies. Customers such as banks, telcos and retailers would use Integrate.AI's software platform to tailor customer offerings that "learn" from customer interactions to become more effective and personalized over time, like Netflix does.

For example, a bank would be able to deploy its software to offer tailored pitches for financial service products or root out the "pain points" in their customer service that frustrate clients; or a cable provider, rather than presenting viewers with the same 1,000 channels every time they tuned in, would offer the shows and channels they were mostly likely to watch.

Mr. Irvine's immediate plan is to hire a core team of 20 to 25 people. "He has to attract world-beating talent, which being in Toronto we believe is an advantage right now," Mr. LaFayette said. Integrate.AI will also spend the next 18 months working with a small group of initial customers – large corporations Mr. Irvine has contacted – to build its AI software platform, which it would then roll out more generally.

Finding that right first group of clients "and working to define tactically and pragmatically the first offerings is something that has to happen right," Mr. LaFayette said. 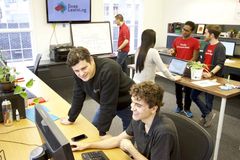