The new CEO of Torstar Corp. and publisher of the Toronto Star does not yet know how he will transform the media company, but at its annual general meeting on Wednesday John Boynton had a clear message: "Everything is on the table."

Mr. Boynton, who took over the role at the end of March, was hailed by the company – and again on Wednesday by Torstar board chairman John Honderich – as a "turnaround specialist." The families who control Torstar are hoping that his deep background in marketing and advertising will help the newspaper and digital-media company appeal to marketers whose budgets have been flowing to giants such as Google and Facebook, at the expense of media companies who invest heavily to create content.

The company needs to change its conversations with marketers, Mr. Boynton said in an interview, and even to change the metrics upon which it sells ads. Clicks on digital ads "are kind of a nineties measurement," while the company should be working to sell ads on the basis of performance for marketers – including whether audiences actually see and digest the messages of those ads. Its subscriber data also represent a rich source of information about customers that could be used to better target them.

But the ability to use that data from the Toronto Star – one of the largest-circulation daily newspapers in the country – and Torstar's hundreds of community newspapers, depends on recognizing those subscribers in the digital world. That's a tough proposition for the company, since it abandoned its experimentation with digital paywalls. Those are not just useful for attracting subscriber revenue in a digital world, their log-in mechanisms are also important for knowing who is reading when – and how to deliver ads to the right people.

The New York Times Co. reported on Wednesday that it had a record quarter for added digital-only subscriptions, driving overall revenue growth even as print advertising continued its dramatic decline.

While the Times is an internationally renowned brand, there have been questions about whether smaller publishers can build out similar strength with digital subscriptions.

"I think it's a bit dangerous to limit the thinking that way," Mr. Boynton said when asked about that idea, though he said he does not yet know how he might approach driving subscription revenue growth.

Torstar reported a $24.4-million loss in the first three months of this year, an improvement from a loss of $53.5-million in the same quarter a year ago. Revenue fell 10 per cent to $138.7-million, as it continues to face declining print and subscription revenues, and mixed digital performance – with weakness in properties such as Workopolis and Save.ca, but growth in local digital advertising at its Metroland media properties. It has also seen growth in its stake in VerticalScope, a Toronto-based company that operates websites for niche audiences, with interests such as pets and cars. VerticalScope's revenue grew 22 per cent in the quarter.

The company continued to cut costs on the Toronto Star's tablet edition, known as Star Touch. The quarter saw a decline of $3.7-million in net investment in that project, which was initially a multimillion-dollar bid to reshape the media company for the future.

The time spent with the tablet edition continues to be strong – in the past the company has reported that users spend 30 minutes a day on average with its content – but it is failing to attract new users. In his final earnings call in March, outgoing CEO David Holland said that his successor would need to "reflect hard" on the future of Star Touch. The company has planned to invest $2-million to $4-million in Star Touch this year, decreasing its spending and cutting costs. Mr. Boynton began the process of reviewing the project this week.

"I'm not going to draw it out," he said. "It's not going to take me long to see what it is we're trying to accomplish and whether it makes sense going forward. It is a product, in my mind – it's not a strategy and it's not a transformation. The transformation is much much bigger than one screen."

The company has continued to cut costs, including eliminating 110 jobs earlier this year – some of them at a Metroland Media Group printing plant that closed in Durham, Ont., in February – which it expects to generate $5.3-million in annualized savings.

The Star invests heavily in investigative journalism, which Mr. Boynton said "is at the top of the pyramid."

"Bringing our content … and understanding customers and how to monetize that is really the big transformation that most companies I see in the industry are just now beginning to understand," he said.

Publishers have been greatly affected by automation in ad buying – often referred to as "programmatic advertising" – which focuses on targeting audiences, and less on the media context in which ads appear. This has led to concerns about brand safety, as marketers have seen their ads pop up on less-desirable corners of the Internet or alongside contentious or even disturbing content, including violence and hate speech. Programmatic advertising also introduced a host of middlemen, and meant that fewer ad dollars get to the publishers who actually offer up ad space. Since automated ad buying is here to stay, Mr. Boynton said, the industry should be working to improve the quality of the system as a whole.

Torstar's board of directors is dominated by five families who own most of the company's voting shares. Mr. Boynton said his experience with family companies – he spent 12 years at Rogers Communications Inc. – gives him an appreciation of the value they contribute, and an ability to work with them on decisive transformation.

"They believe that small incremental change is not what we're after, that we need a complete transformation," Mr. Boynton said in an interview. "I've talked internally about how there are no sacred cows. Everything will be looked at. We'll deconstruct everything and put it back together."

Why Torstar is nearing a breaking point
Subscriber content
January 20, 2017 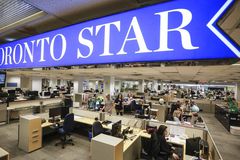 Torstar CEO announcement is near, and a new contender emerges
Subscriber content
March 2, 2017 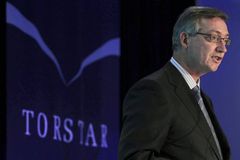