Richard Bartrem was enjoying a beer at WestJet Airlines Ltd.'s Vancouver Christmas party earlier this month when he heard the DJ cue up the opening notes of one of the biggest songs in the world: Gucci Gang, by the 17-year-old Florida rapper Lil Pump.

Within a minute, says Mr. Bartrem, the airline's vice-president of marketing, someone raced over to the DJ and asked for another song. And so staff were spared from hearing Lil Pump flood the room with a line many of them were already too familiar with: "Everybody scream, 'Fuck WestJet.'"

Gucci Gang has been inescapable for WestJet staff for months, Mr. Bartrem says. "I'm like, 'Really? At our own Christmas party?'" But other than the odd awkward moment, he says the company's executives are taking WestJet's cameo in stride. If anything, they find it a little funny.

The song's official video has racked up almost 278 million views on YouTube. It's No. 4 on Billboard's Canadian singles chart and has hovered near the top of the U.S. Hot 100 for weeks. Just a hair longer than two minutes, it is the shortest track to reach the top 10 in 42 years. It is also the first to climb the chart's upper echelons whose lyrics curse out a major Canadian airline.

Lil Pump, born Gazzy Garcia, has had a bone to pick with the Calgary-based carrier since he discovered he is no longer welcome to fly with them, after disturbing other passengers while admittedly intoxicated on a flight last summer from Vancouver to Toronto. "They kicked me out the plane off a Percocet," he raps earlier in Gucci Gang, "Now Lil Pump flyin' private jet."

Mr. Bartrem says the rapper wasn't kicked off the plane – he made it to his destination – but rather, he's now banned from the airline entirely. While WestJet traditionally doesn't discuss individual customers, Lil Pump's forthcomingness has compelled the carrier to confirm some details. "This, I think, has transcended privacy," Mr. Bartrem says.

YouTube videos from July show the rapper, whose management and booking representative did not respond to interview requests, riding a luggage cart into an airport, then moving about in a WestJet plane. While on board, he rapped lines from his song D Rose, removed his shirt and repeatedly yelped his signature catchphrase, "Esketit!" – that is, "let's get it!" In the end, he is seen on a wheelchair, being wheeled through an airport by what appears to be a WestJet employee. "This is how I'm treated when I come into Canada, baby," he says.

"You had 134 people on the plane who paid good money to go from A to B not having to deal with that," Mr. Bartrem says. "If I were working on my own rap song, it might be called Consequences."

Mr. Bartrem, who sometimes catches himself humming the song, says WestJet executives first got wind of Gucci Gang through their social media team a few weeks after its late-August release. At the time, it was just a catchy song by a promising up-and-coming rapper with a growing fanbase who'd just signed to a division of Warner Bros. Records. But within a month, he released his self-titled debut album with features from 2 Chainz, Rick Ross and Gucci Mane; Gucci Gang entered the Hot 100; and he hit No. 1 on Billboard's Emerging Artists chart.

The song just kept getting bigger, peaking at No. 3 on the Hot 100 in November. WestJet, for its part, just let it slide. "We didn't believe there was anything we needed to be doing. We believe it would only fan the situation," Mr. Bartrem says.

The chart coronation of the rapper's airline excoriation shows just how quickly technology is changing music's barriers to entry. Soundcloud, a free service that lets users upload their own songs, has unintentionally incubated a whole subgenre and built a community around it. It is called, sometimes pejoratively, "Soundcloud rap" – music that blends the abrasion, aggression and do-it-yourself culture of hardcore punk music with contemporary hip hop's aesthetics. Lil Pump rose to prominence on the service and, with Gucci Gang, has become one of its biggest commercial successes.

The genre is also marked by overt substance abuse; Lil Peep, one of the flag-bearers who helped elbow its sound into the mainstream, died last month of an overdose of fentanyl and Xanax. There are concerns that Lil Pump, so young he still wears braces, is embracing his lifestyle too flippantly – he celebrated reaching a million Instagram followers with a Xanax-shaped cake – and that the professionals now guiding his career are enabling him.

Mr. Bartrem, too, says he is worried for the artist and the pressures he might be under to maintain the lifestyle.

He is not worried, however, for WestJet's reputation. If his company felt truly affronted, surely, he says, other businesses might feel even worse: "I might think a certain Italian leather goods manufacturer whose name is in the title would be first in line." 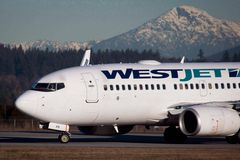