In person, Auston Matthews is much bigger than one would expect: tall and muscular with thick legs and an ample posterior.

“He’s got that Mario Lemieux-type of body going on,” his teammate, Tyson Barrie, says.

He lacks the speed and lo-co-motion Connor McDavid employs to hornswoggle goalies, but makes up for it with a razor-sharp shot that is arguably the best in hockey after Alexander Ovechkin’s.

“It just keeps getting better and better, and that’s hard to believe,” says John Tavares, the Maple Leafs captain. “When you see it on a daily basis, it’s very impressive."

Toronto’s 22-year-old centre is in the midst of a season for the ages, perhaps the greatest the century-old organization has seen. He has 34 goals through 48 games, and is on a pace to surpass the franchise record of 54 in a season.

It is improbable, but he could even get 50 on home ice before the season ends. He heads into Saturday’s engagement with the Chicago Blackhawks with 27 in 24 games at Scotiabank Arena. It is the team’s final match before the all-star game, to which Matthews has been invited for a fourth consecutive time. The Leafs will have 16 more home games after the break.

“He is unbelievable right now,” Calgary’s forward Matthew Tkachuk, also an all-star, said this week. Both grew up in Scottsdale, Ariz. "We have seen him put the puck in the net throughout his career, but not like this. It seems like he scores every game.

"He is in the top tier of the league, not just from his goal-scoring but as a total offensive player. You have to have multiple guys and layers ready to take him on, and you don’t want to allow him to get in a one-on-one situation with anybody. He is that good and that gifted.”

A season that began with the disclosure of an embarrassing off-season incident has turned into something sublime.

He is the first Maple Leafs player to score 30 goals in each of his first four seasons, and the first U.S.-born player to do the same. His name has begun to pop up in conversations about the Hart Memorial Trophy, which is awarded to the player deemed most valuable to his team, and rightly so. Toronto is 16-3-5 in games, in which he has scored and it is 9-13-2 when he hasn’t.

He has 19 multiple-point games, four game-winning goals and 10 that tied games. Only David Pastrnak of Boston has more goals, with 36.

“The thing I think everybody has noticed is that Auston has a bit of a flair for big goals late in games,” says Kyle Dubas, the Toronto general manager. “I don’t attribute that to somebody who is able to step up in big moments. I attribute it to someone who, when the pressure is high and everyone else is losing their heads, is able to remain calm and focused and be who he is. That is a major area of growth.”

He has scored 15 times and has eight assists over the past 14 games. During that span, Toronto is 9-2-3. When he was shut down by the Flames on Thursday, it was the first time he had not scored in a home game since Dec. 4.

“I think he has had a great season for us, and I think if you asked him, he would be and should be proud,” Dubas says. "I think he would also tell you, and we would agree, that he still has a lot more to [improve] his game at different levels. That’s what makes it the most exciting for everybody.

"He works very diligently in the off-season to master his craft and takes a very serious approach to his off-ice preparation, and that is starting to manifest itself. I think the number of goals he is scoring is a byproduct of that.”

Last February, Matthews signed a five-year contract at an annual average of $US11.6-million. Until then, he was making the maximum of $925,000 under his three-year rookie deal. In three-plus seasons, he has averaged more than one point a game – 262 in 260 – and won the Calder Trophy as the NHL’s top rookie in his first year.

Matthews is polite and introverted. He is similar to McDavid, a fellow No. 1 draft pick, in that he finds it difficult to explain what he actually does that makes him outstanding.

“I try the same every night to be as consistent as I can,” he says, seemingly puzzled.

When asked to identify the one area he thinks needs the most improvement, he pauses for a short time and then defers.

“I am not really sure how to answer that,” he says.

It is not impudence or effrontery. It is like asking Picasso to describe his brush strokes.

“What goes most unappreciated about him is how hard he works,” says Jason Spezza, 36, and Matthews’s teammate for the first time. "I knew about his shot because I had marvelled at it from afar.

“The way he is playing now is going to become his norm. He is reaching his prime."

Matthews was only the seventh American chosen with the No. 1 pick, and he was the first in the modern era of the NHL to score four goals in his debut. So what’s happening now isn’t a surprise. The significant improvement he has shown on defence is.

“The biggest thing I have learned about him is that he is a very good player defensively away from the puck,” says Sheldon Keefe, who took over as head coach from the ousted Mike Babcock. “He is always engaged and never stops tracking."

Offence is his calling card and always will be.

“If he doesn’t get 55 goals this season, I’d be shocked,” says Rick Vaive, who in 1981-82 became the first Toronto player to score 50. He shares the franchise record of 54 with Dave Andreychuk, who did it in 1992-93. "I talked to him recently and told him that I hope I am there that night to congratulate him.

“It is not easy to score 50, no matter what decade you are talking about and no matter what the level. I don’t think people understand how difficult it is. It’s like a 50-home-run season in baseball.”

Vaive says it will become more difficult for Matthews in the second half of the season.

“Once you become a known goal-scorer, it gets hard," he says. “Teams understand that you score from certain areas and they take them away from you.”

There are other things to know about Auston Matthews. He has become pals with Justin Bieber and has tattoos that cover both arms.

“I got the first when I was 17,” he says with a sheepish grin. “I didn’t tell my parents I was getting it. Eventually, I had to show them."

He wears a moustache that charitably can be described as not his best physical feature. Kids love it, though. They tape a fake one above their upper lips and stand by the glass at Scotiabank Arena for him to see.

“It is pretty awesome,” Matthews says. “It has become like a thing now, I guess."

He has a kind and nurturing nature. Even before he played his first game for the Maple Leafs, he visited patients with cystic fibrosis at Toronto’s Hospital for Sick Children. He still does it quietly, partially in memory of his Uncle Billy, who died from the disease when Auston was just three.

“I go because of that, and because the organization has such a good relationship with the hospital,” he says. “It’s a combination of a little bit of both.”

He has a self-deprecating sense of humour. After scoring four goals in his NHL debut on Oct. 12, 2016, he didn’t have another hat trick until Tuesday night, when he scored three in a lopsided win over the New Jersey Devils.

He played 258 games between his first hat trick and the next. On 27 occasions, he scored two goals in a game but was unable to ring up a third.

“Sooner or later, I figured I’d get one,” Matthews says.

Michael Hutchinson, the Maple Leafs backup goalie, has a rink-side seat from which to watch him on most nights.

“When he is on the ice, you expect something special to happen,” Hutchinson says. 'We have so much confidence in him and his abilities."

Hutchinson played against him only once, when he was with the Winnipeg Jets.

“We won in overtime,” Hutchinson says. “He came in on a breakaway and tried to shoot between my legs and I closed the door. I am sure that is the only time I will ever get the best of him.”

He gives Tyson Barrie a ride to the airport every time the team travels. Then they sit side by side on the plane.

“He has a good sense of humour, and we have similar taste in music," Barrie says. "For a guy who is such a big superstar, he’s humble and pretty down to earth. 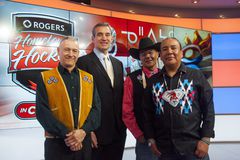 Before reviving the Battle of Alberta, the Flames play Tkachuk Bowl IV
January 17, 2020 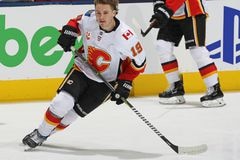 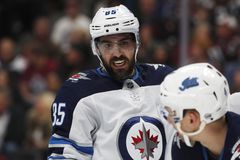