The rink had always felt like home for Keegan Messing. But in the days and weeks after his brother’s death, the Canadian figure skater struggled to find solace on the ice.

In a sport that requires steely nerves to reel off big jumps, and the ability to dig deep to push through searing pain, Messing had lost his will.

Less than four months after his younger brother Paxon died in a motorcycle crash in Anchorage, Alaska, Messing is aiming for his first national title at the Canadian figure-skating championships, and a spot on the world championship team. He credits fellow Canadian skaters Nam Nguyen and Piper Gilles for getting him to the start gate.

“A lot of it in the early stages was finding the will to skate, finding a reason to hurt, the drive to push through that, the mental willpower to push through the hard parts of the program,” Messing said. “When your mind is broken and weak, the question of why comes in.”

Paxon, who at 26 was younger than Keegan by a year, was killed in a motorcycle crash in Anchorage on Sept. 22, leaving behind his wife, Faith, and three young sons.

Gilles competed at the 2018 Pyeongchang Olympics with partner Paul Poirier while her mom, Bonnie, was in the late stages of brain cancer. Bonnie died in May of that year.

“Piper was one of the biggest people to help keep me on the ice, to give me new meaning to skate, to help find the strength to skate through hard times,” Messing said. “And I gotta say Nam, he was right there with me also, he called me almost every day, honestly through this we’ve grown even closer. Just a great friend, great buddy, I’m just glad our skating community is so tight knit.”

Nguyen, a 21-year-old from Toronto, will be Messing’s toughest competition for the lone men’s singles spot on the world team. But the two have a friendship that transcends sport.

Nguyen said just a week before Paxon’s death on Sept. 22, Messing had been complaining about “how annoying his brother is. As brothers do.”

“And then that happened,” Nguyen said. “At that point, there’s only so much you can do especially when you live on the other end of the friggin Earth from him.

“That helped me realize that sport is such a small thing in life. Yes you get such a rush from it, but at the end of the day, life is a lot bigger than that. It doesn’t matter if we’re competing against each other, we always have to be there, support each other. It doesn’t matter who gets to go to worlds, we’ll always be there.”

Messing, who lives in Girdwood, Alaska, but has dual citizenship and competes for Canada, wasn’t one of the many speakers at his brother’s funeral. Instead, he skated a tribute to Paxon during the gala (the postchampionship event that is more show than competition) at Skate America in mid-October.

Skating to Bryan Adams’s Here I Am, the song that played during a slideshow at his brother’s memorial, he placed a huge photo of his brother at centre ice. When the music stopped, he knelt in front of the photo, trying to fight back tears, with a hand over his heart.

“It was my way of saying goodbye in my own words, although no words were spoken,” Messing said.

After his fourth-place showing at both Skate America and Cup of China, Messing took a break. He and his wife, Lane Hodson – the two were married in August – went for hikes, long car rides and walked the dogs.

“I didn’t even unpack my skates,” he said. “[Before then] I never had a moment to stop, to let it hit me really.”

Messing has been back on the ice for a few weeks, and spent a couple of weeks in Edmonton working with Kaetlyn Osmond’s coach Ravi Walia, with the blessing of his own coach of 23 years, Ralph Burghart, a long-haired Austrian who skated at the 1992 Olympics. In past years he and Burghart have discussed moving from Alaska for skating.

“But after this loss, I feel that might have got prolonged or not even possible any more, just to stay around family,” he said.

The men’s short program was Friday evening at Paramount Fine Foods Centre, with the free program scheduled for Saturday. 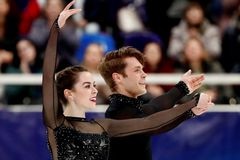 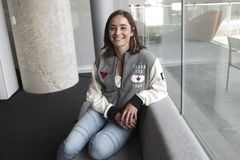 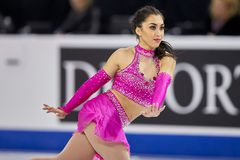