The Montreal Impact aren’t taking anything for granted as they prepare for another crucial game against the Vancouver Whitecaps.

The Impact (5-4-1) have bested the ‘Caps (3-7-0) twice already this season, including a dominant 4-2 victory on Sunday. But Montreal coach Thierry Henry said no one on his squad is expecting a cake walk when the two clubs meet again in Vancouver on Wednesday.

“It’s not easy to beat a team back to back. … It’s going to be extremely difficult,” he said.

“You have to respect your opponents and be prepared to play against that opponent whether you’ve beaten them before or not.”

Wednesday’s game carries extra heft for the Impact. A win would secure Montreal’s spot in the Canadian Championship final. A draw or a loss would see the honour go to Toronto FC.

Sunday’s match saw both Montreal and Vancouver go down a man due to red cards. Whitecaps striker Lucas Cavallini was tossed in the 57th minute after he clipped Impact ‘keeper Clement Diop in the head on a shot, resulting in several players from each team engaging in some pushing and shoving.

Cavallini issued a public apology on Twitter Tuesday, saying he let his emotions get the better of him.

“There is still a lot of football to be played and we are working hard to build something special here in Vancouver,” the post said. “You can be sure I will use this as a chance to grow and give everything I have for this club and this city.”

Emotions aren’t always a detriment on the field, said Vancouver coach Marc Dos Santos – they just have to be channelled in the right direction.

The physicality of Sunday’s match was in part due to a long-standing rivalry between the Canadian clubs and in part due to the Whitecaps’ frustration with under performing in yet another game, said defender Jake Nerwinski.

The ‘Caps have struggled since returning from the MLS is Back tournament in Orlando, going 1-4-0 in the current all-Canadian series.

“Sometimes, when we’re down losing, frustration gets to us because we know that we want to be playing better. We want to be getting points, we want to be in the game,” Nerwinski said. “And I think that it just kind of came down to that. It came down to rivalry and a little bit of disappointment.”

As a group, Vancouver didn’t stick to its game plan in the loss, allowing Montreal’s attackers to get in behind and put shots on net, and that needs to change on Wednesday, he added.

“Vancouver is a very physical team, a lot of physical players who like to tackle, like to fight. And those kind of situations create tension between the strikers and defenders,” he said. “But I think we have to stay calm, move the ball well. … We can and we will be very dangerous.”

Wednesday could well be the final time a Major League Soccer match is played in Canada this season, with the next series of games all set to take place in the U.S.

The Whitecaps will visit Utah first, playing Real Salt Lake on Saturday. From there, the team will travel to Portland, which will act as the club’s temporary home base. The ‘Caps will fly to California on Sept. 23 to play Los Angeles FC before heading back to Portland, where they’ll face the Timbers on Sept. 27.

Plans for after that game have yet to be confirmed as the club continues discussions with health officials and the Canadian government.

The Impact know they’ll have a home base in Harrison, N.J., for the next three games on the MLS schedule.

They’ll host the Philadelphia Union at Red Bull Arena on Sept. 20, then travel to Foxborough, Mass. to play the New England Revolution on Sept. 23. Montreal will wrap the series with a match against the New York Red Bulls back in New Jersey on Sept. 27.

The club has not yet determined whether players and staff will come back to Montreal after the three games or if they will stay in the U.S.

NEW OPTION: Dos Santos said Janio Bikel could be in the Whitecaps’ lineup on Wednesday. An undisclosed injury has kept the midfielder/defender from Guiena-Bissau out of the lineup since the MLS restarted.

MISSING MANNY: Montreal will be without Emanuel Maciel. The 25-year-old midfielder was shown the red card on Sunday after a hard tackle on Vancouver’s Cristian Dajome. 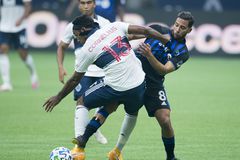