Victoria Marchand has played soccer since she was 3 or 4, but says she never realized the discrimination she experienced in sport until she started sharing the field with other Indigenous players for the first time in 2017.

Growing up in Ottawa and Gatineau, Que., Marchand said she was always one of the “only brown people” on past teams.

"If we talk about racism in sport, I never thought that my eyes would be opened to what I faced previously, until I joined this team, until I found people who were like me,” she told The Globe and Mail. “I felt like I finally had support in my own sport when I always felt alone.”

At 26, Marchand now considers her fellow teammates with the Native Indian Football Association (NIFA) to be sisters.

“They are my relations."

The team, whose players span from ages 16 to 34, is currently gearing up for the World Indigenous Games in Brazil – an event originally set for next month, but delayed until 2021 because of COVID-19.

Captain Lacey Baker, a 34-year-old from Squamish Nation in British Columbia, said the soccer team is trying to stay positive about the event given the uncertainty of the pandemic.

The team is coached by Dano Thorne of the Cowichan tribe of Coast Salish Nation in B.C. He started NIFA in 1990 to bring a holistic approach to the mental, physical, emotional and spiritual well-being of players as they strive to reach their potential. The organization’s vision is also to help Indigenous athletes compete nationally and internationally.

In an interview, Thorne said the women’s soccer program is just one example of what is possible.

As the country looks at reconciliation with Indigenous peoples, there’s an opportunity to act on the Truth and Reconciliation Commission’s calls to action and to recognize sport leaders in communities, he added.

“Elders say to me we still have to carry on because it keeps our kids dreaming, it keeps our kids alive,” he said. “It provides ongoing health and wellness and getting a chance to see the world from their eyes."

Through NIFA, Thorne has created partnerships and opportunities with different countries to shine a light on the talents and skills of Indigenous players, Baker said, adding these relationships could ultimately mean that players may be scouted.

“Maybe they will have an opportunity offered to them to leave and flourish or to follow their dreams, whatever that may be,” Baker said. “Even just travelling ... a lot of our players, young ones, will never even leave the reserve or leave their province, and by being part of this program it gives that opportunity for them to see a glimpse of another country, other traditions, other protocols, other customs that I just hope it encourages more people to get out there.”

Thorne also said that if Indigenous players get a fair shake there will be more athletes who can qualify for Olympic and national teams.

With players from communities across the country, one of the central challenges for the NIFA women’s soccer team is that they don’t get to train together in person and build chemistry on the field.

For example, Baker said she didn’t meet Marchand face-to-face until they were on the field and playing in the 2017 World Indigenous Games.

“It was my first time playing with the girls,” Marchand said.

She said, however, it was great to watch the unison of the team unfold in real time.

“I’m on the back line, I play the sweeper position, so to watch everyone’s strength on the pitch ... it is a beautiful dance," she said. “To build chemistry and meet these ladies from all over and get to learn their traditions and their customs ... or what are their challenges within their communities is really eye-opening.”

As the team looks toward the future, it also carries the pride of winning the inaugural World Indigenous Games soccer tournament held in Palmas, Brazil, in 2015, an event that brought together 2,000 athletes and cultural delegates from two dozen countries and hundreds of First Nations. The team won again at the World Indigenous Games in 2017, held at the Maskwacis First Nation in Alberta.

Throne said his women’s soccer team went to the 2015 event with hopes the players would do “the best they could” and they ended up winning.

“We got so much recognition for that from our communities,” he said.

Harry Rice, a councillor with the Mohawk Council of Kahnawake and an assistant coach of the NIFA team, added that the win was one of the proudest moments of his life.

It was a very emotional moment for Rice personally.

“I cried; not as much as when my children were born, but I cried," he said.

"They were happy tears. It was pure, pure, pure pride. And I think that’s what all the girls now strive for, is that sense of pride to represent not only First Nations, but represent women and to represent their own personal nation whether it be from British Columbia or any other province across Canada, and to hold themselves with that dignity that, ‘I am First Nations, I can do this. Watch us. We will do this.'”

“Everyone just worked so hard for that win," Baker added. “It overwhelmed all of us.” 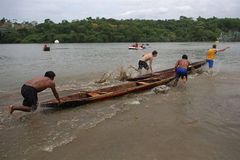 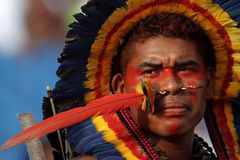