For the second time in two weeks, a young Canadian athlete went toe-to-toe with a member of the Korda family.

However, unlike the first meeting, when Denis Shapovalov outduelled Sebastian Korda in the first round of the US Open, and despite one or the other being on top of the leaderboard all afternoon, neither Brooke Henderson nor Nelly Korda, Sebastian’s sister, were able to win on Sunday.

Instead, it was left to South Korea’s Mirim Lee to break up the burgeoning rivalry and take the traditional winner’s leap into Poppie’s Pond at California’s Mission Hills Country Club. That she even had the opportunity required something of a golfing miracle, with the world No. 94 forcing her way into the conversation by chipping in an eagle on the 18th for a share of the lead, resulting in a three-way playoff.

Lee then took down the ninth-ranked Henderson and third-ranked Korda on the first extra hole with a birdie to win the ANA Inspiration, the second women’s major of this truncated golf season.

Henderson, from Smiths Falls, Ont., had a shot to extend the playoff to another hole and preserve her chance at another major crown, but her second putt in the playoff rolled narrowly wide left. Sunday was the 23-year-old’s second career playoff, having won her first and only major – the KPMG Women’s PGA Championship – by edging Lydia Ko in the sudden-death format four years ago.

“You’re playing against the best in the world out there, and it’s tough to lose that way,” she said. “I felt like I missed a lot of putts. Especially those final rounds where I feel maybe it could have been a different story, but Mirim and Nelly played great, and I really fought my way around, so I’m happy.”

Henderson getting to the playoff took something of a controversy, however. In non-pandemic times, the 18th green at Mission Hills is backed by a hospitality tent, but with the public barred from the event, it had been replaced by a large blue wall at the back of the island green.

The backstop had prevented Lee’s ball from going in the water just before she hit her eagle, and Henderson’s second shot on Sunday actually ended up underneath the wall. That allowed her a generous drop in front of the obstacle and set up arguably her shot of the day, a chip to within two feet that allowed her to birdie for a share of the lead, punching her ticket to the playoff.

Some commentators felt that the wall’s presence was entirely unnecessary.

“The fact is, it has been way too artificial,” Hall of Famer Judy Rankin said on the Golf Channel broadcast. “There was no real reason for it to be there. There were no spectators, or clients, or anything like that. And it has affected play way too much.”

While finishing tied for second should set Henderson up well for the rest of the LPGA season, her putting woes on Sunday were a big reason she fell short.

Having surged back into contention on Saturday by tying the tournament record with a 30 on the front nine and finishing with a seven-under 65 for a share of the lead, she had 30 putts on Sunday – six more than Lee – despite hitting 16 of the 18 greens. Lee’s putting stats were helped by the fact that she chipped in three times during her championship-clinching round.

Henderson, who passed Sandra Post last year with her ninth LPGA title to make her the most successful Canadian golfer, had only played two tournaments since her sport resumed in late July. She missed the cut at the AIG Women’s Open – her first missed cut at a major – last month, before tying for 49th at the Walmart NW Arkansas Championship two weeks ago.

She had looked to be in control of this championship after taking the outright lead on the back nine. Korda, the daughter of former Australian Open winner Petr, hit her third bogey of the day on the 12th, giving Henderson the overall lead at 15 under.

But the Canadian registered a double-bogey on the 13th – a hole she also bogeyed on Saturday – to fall back into a tie for second with Lee, and setting up the drama to come.

Canada’s Brooke Henderson charges into a share of lead at ANA Inspiration
September 12, 2020 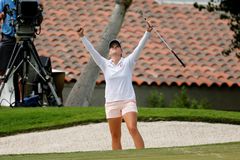 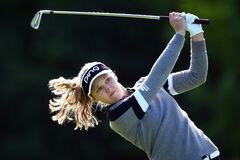