After surviving the longest road trip in the franchise’s history, Montreal Impact players are brimming with confidence ahead of their home opener.

“Six games on the road is a lot,” midfielder Harry Novillo said. “We’re dying to play in front of our fans. We’ve all been waiting for this for a long time. It’s always better to be home on your own pitch. We’re going to give it our all on Saturday.”

Montreal is coming off back-to-back scoreless draws in New York last Saturday and Washington on Tuesday – the club’s first consecutive clean sheets on the road since October, 2015. With wins in San Jose and Orlando earlier this year, the Impact has already collected eight points away from home, three fewer than all of last season.

“It’s a great start to the season, much better than last year,” Canadian international Samuel Piette said. “To go on the road, to stay in the playoff picture, to prevent other teams from taking maximum points, that’s huge. Now it’s up to us to do well at home.

The Impact is seventh in the Eastern Conference despite being the only team in the East that has yet to play a home game.

“D.C. played four games at home. Orlando played three games at home. Same thing for Toronto,” said Novillo, who made his first career MLS start in New York last week. “I can name you 10 more teams like that. Six games on the road for us. We did what we could, we got points. Few teams could have done what we did on the road.

“We’re confident now. We’re working toward being the best.”

It will be the third game in eight days for the Impact, which again will be without star midfielder Ignacio Piatti.

The Argentine will miss his fourth game in a row as he continues to recover from a knee injury. Piatti is scheduled to undergo additional medical tests early next week. He has yet to resume training with his teammates.

Columbus is a big test for an Impact side trying to show it can compete with the league’s top teams.

The Crew has been remarkable on defence to begin the 2019 campaign.

The Ohio team has conceded a conference-low four goals while posting a league-high four shutouts. Goalkeeper Zack Steffen has not conceded a goal in 444 consecutive minutes of play.

That doesn’t bode well for a Montreal squad struggling to score goals this season. The Impact has netted seven goals in six games – with three by Piatti.

Montreal has one goal in its past three games.

Impact coach Rémi Garde will have striker Maximiliano Urruti back at his disposal. Urruti missed the most recent match while serving a one-game suspension for a red-card offence. The 28-year-old leads Montreal with two assists this season.

“We can’t let them dictate the pace of play,” Garde said of Saturday’s opponents. “They’re a very good team. They’ve been together for many years, their philosophy and their mentality has not changed. We cannot let them play. We have to set the tone for the match – both offensively and defensively.

“It’s not because we are coming back home and playing in front of our fans that we have to lose the structure of the team and the tactical discipline that we’ve had in recent games.”

NEW BEGINNINGS: It is the first home opener at Saputo Stadium, with the previous seven seasons beginning indoors at Olympic Stadium due to the cold weather.

FIELD CONDITIONS: A midweek snowfall in Montreal is giving Saputo Stadium grounds crew a headache ahead of the home opener. But Garde and the players firmly believe the pitch will be ready.

HOSTILE TERRITORY: The Crew are 2-5-1 all-time in Montreal.

RUMOUR MILL: A recent report out of Central America has linked Panamanian forward Omar Browne to the Montreal Impact. When asked if the reports about the Independiente player were true, Garde said: “Interesting player. He had good games in the Champions League. We’ve had our eye on him.”

PASSPORT PROBLEMS: Midfielder Harry Novillo finally addressed his passport issue Thursday, saying: “I was frustrated I couldn’t help my teammates. It affected everyone.” Novillo could not travel to Kansas City two weeks ago because he lost his passport. Montreal lost that game 7-1. 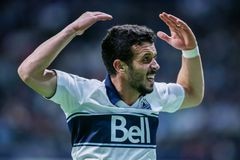