During her many summers as a Rogers Cup volunteer, Anne Marie D’Amico had seen it all. She’d worked as a ball kid, booked practice courts, filled ice baths and towelled off wet stadium seats after rainfall.

Once, she was summoned to the women’s changing room, where a player had misplaced the keys to her locker. D’Amico pried it open with a crowbar.

“There was no limit to what Anne Marie would do for someone,” said David Catalfo, a long-time Rogers Cup volunteer and friend who had known D’Amico since they were both ball kids.

With the Rogers Cup set to return to Aviva Centre next week, the tournament will be without D’Amico, one of its most valued volunteers. The 30-year-old was among 10 people killed in the Toronto van attack in April. Tennis Canada will honour her and her family’s combined 85 years of tournament service during a ceremony on centre court on Monday. Despite still dealing with their loss, D’Amico’s family members were the first to pick up their volunteer packs for this year’s tournament.

For a close-knit group of volunteers who worked alongside her for the better part of two decades, D’Amico’s absence leaves a profound void this year.

“I think Monday night will be very emotional, and it will be comforting to see her family,” Catalfo said. “Tennis Canada’s group of volunteers is a strong community – like a family – and I think that will be even more prevalent this year.”

Tennis Canada has established two annual awards in D’Amico’s name: one for exemplary volunteer customer service; and a $2,500 scholarship for a ball kid in both Toronto and Montreal. Staff and volunteers will wear red bracelets inscribed with the phrase “What would Anne Marie do?” as a reminder of D’Amico’s loyalty, generosity and helpfulness.

“We want people to think about how she treated people,” said Gavin Ziv, Tennis Canada’s vice-president of professional events and managing director of Toronto’s Rogers Cup. “She’d become such a part of the fabric of this tournament.”

D’Amico began as a ball kid at Rogers Cup around the age of 13, and had returned every summer since. In her teenage years, she’d dart attentively about the courts, chasing down tennis balls for some of the world’s top players. As she became more senior on the crew, she worked the finals on Sunday.

Because D’Amico was used to spending time around famous players, she went on to volunteer with the player-services team. For several years, she was a familiar face in a small office that serves as the pulse of the players’ quarters during the Rogers Cup.

There was no limit to what Anne Marie would do for someone.

D’Amico kept the tiny space interesting, folding towels into little animals, joking around with players, booking their practice courts and taking on fellow volunteers in office games. She would jump into action at any request.

During years when Toronto held the women’s event (the men’s and women’s competitions alternate between Montreal and Toronto), she would help run the players’ locker room, stocking the counters with beauty products.

“She made everything fun, and she went above and beyond trying to make people feel happy and comfortable, and the players totally remembered her every year,” said Jocelyn Luk, who had volunteered with D’Amico since the two were teens. “We have a close group, and it’s like coming back to the same awesome camp every summer. It will be weird not to have Anne Marie there this year. She will definitely be missed in many areas.”

A dedicated volunteer, D’Amico often spent free time chipping in on various projects. Aside from the Rogers Cup, she’d used her vacation time to help out at the Pan Am Games. D’Amico, who had earned a business degree from Ryerson, also travelled to the Dominican Republic to build homes for those in need.

She didn’t play much tennis, but loved volunteering at the Rogers Cup, a family tradition for decades: Her grandmother, Franca, and mother, Carmela, in guest services; her father, Rocco, as a driver for players; and her older brother, Nick, on the ball crew. The D’Amicos would arrive early each morning and stick around well after their shifts were over, staying through the last match. They’d share stories from the day.

“It always feels more like an annual international family reunion, with relatives coming from all over the world. And there just happened to some famous personalities who could play tennis really well,” her brother, Nick, said. “The Rogers Cup has been like a second family to us for over 20 years. It’s the cornerstone of our summer and blocking off the nine days is a no-brainer.”

Volunteer of the year

D’Amico was selected as the Rogers Cup volunteer of the year in 2016. Tennis Canada took notice of the way she dealt with the players and coaches, and wanted to use those people skills in a more public-facing volunteer role in 2017, so she was asked to oversee the tournament’s largest volunteer group – the 200 who work inside centre court, seating and interacting with the fans.

“I asked her to fill a role that was perhaps not as glamorous as working with the players had been, but she was constantly thinking, ‘Where else can I help?'" said Greg Jauncey, Tennis Canada’s operations manager. “Her natural customer-service skills transitioned so well to any task.”

D’Amico had built strong friendships with the group of people her age who returned as volunteers yearly since being ball kids. They enjoyed a cherished early-week tradition at every Rogers Cup: a “legends of ball kids” match, where many of them came out of retirement to be ball kids for one late-night match. They weren’t as quick as they used to be, but chasing down balls came back to them just like riding a bike.

“I’d been on the court with Anne Marie for that in recent years,” Catalfo said. “She would often lead some stretching exercises for us, even though we knew we’d all still be feeling those aches and pains for three days.”

D’Amico and the group of close friends had a Friday night tradition, too: spending an all-nighter on site instead of going home. They’d work until after midnight as usual, and then hang out late, trying to squeeze more out of their short time together. They’d sleep on couches that night or in residence rooms on the York University campus.

D’Amico put in more than the nine long days of the tournament. She’d attend meetings periodically during the year to help with planning.

She had just been at a meeting a few weeks before her death. The venue where they met that day happened to be clearing out some floral table centrepieces. Volunteers were invited to take some flowers home.

“Anne Marie took one for every member of her family, because she didn’t want anyone to feel left out, and she thought it would make them all so happy,” Luk recalled. “I remember taking a Snapchat of her that day, walking down the hallway awkwardly trying to carry out all these vases full of water and flowers. She was like, ‘I got it.’ That’s my last memory of her. I couldn’t even give her a hug because her arms were full of so many flowers.”

As the first victim police publicly identified after the van attack, D’Amico became the early face of the tragedy. Word spread quickly throughout the Tennis Canada community. Messages of condolence came from across the country and from the world of tennis.

A funeral for her at a Catholic church in Toronto was packed. Her brother delivered the eulogy. Many of her long-time Rogers Cup friends were there, and afterward they went to lunch at a favourite restaurant where they’d gone with Anne Marie many times.

“Anne Marie loved to get involved and was always there to make sure the little things got done right. And whatever she did, she would make it memorable because she would put in her whole heart and soul until it was perfect,” her brother said. “Perfection was her obsession. Going the extra mile to make someone else feel better was very natural for Anne Marie.”

‘She did everything with her whole heart’: Family, friends remember Toronto van attack victim Anne Marie D’Amico
May 2, 2018 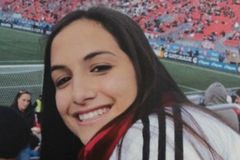