When Sportsnet announced it would do away with a standalone radio broadcast of Toronto Blue Jays games this season and replace it with a simulcast called by Dan Shulman and Buck Martinez for both radio and television, fans cried foul. Though the network explained the move was made because of protocols related to COVID-19, no other Major League Baseball team will be simulcasting its games.

The Globe and Mail spoke to a number of prominent broadcasters, writers and super fans about the loss of a dedicated radio play-by-play broadcast, a Canadian spring and summer tradition built on the legacy of airwave heroes Jerry Howarth, Tom Cheek and others.

Veteran television and radio broadcaster Bob McCown, who served as the public-address announcer for Blue Jays games at Exhibition Stadium during the franchise’s inaugural season

It’s little things like commercial breaks and promos. If you have a radio crew, they’re able to promote things that are coming up on the radio. Just as Dan Shulman and Buck Martinez would promote things coming up on Sportsnet. Are they going to do radio network promos on television? I doubt it.

I lived through the relationship between radio and television for a long time, on Prime Time Sports. It’s not a friendly relationship. It is confrontational. That’s where you create a potential situation that could be problematic. And I’m not even sure the suits who made this decision realize it.

Some of my most memorable baseball memories were not from sitting in the stands or watching the game on the tube, but listening to the radio. Driving home from the cottage, I heard Dave Stieb’s heartbreaking first one-hitter.

There are nuances and descriptors that radio broadcasters share with their audiences that are simply not the same as a cabal of TV announcers, no matter how good they are. It’s a time-honoured craft that requires a special ability to bring to life what we at home simply cannot see. This is a bad and regrettable decision.

I’m not sure simulcasts are the end of the world. Perhaps people are overreacting. But we’re losing something we value, and it’s already possible we’re not going to see any baseball in person in Toronto this season. In the United States, you can get a vaccination at a Wendy’s drive-thru. Here in Canada, we’re still waiting for the cotton swabs to show up from Mauritania.

Stacey May Fowles, novelist and author of Baseball Life Advice

There’s a certain obvious nostalgia, romance and style of storytelling to the experience of the traditional radio broadcast. During a time when we are all groping for the comfort of the familiar, for connection, that feels exceedingly valuable.

Baseball demands a lot of time from fans, and that distinctive background hum feels so important in terms of accessing the game. Even though Jays baseball on the radio is not actually disappearing, it does feel like it’s about to be fundamentally changed – that it could easily become an afterthought. Even if you’re optimistic, it’s hard to deny that the loss of any beloved media stings right now, because it’s part of a much bigger picture of things – of experiences, and places, and voices – that we have lost.

I’m worried that Dan Shulman is being stretched to a point where it‘s unfair to a broadcaster of his stature. To put the idea in his head that he has to be speaking differently – to present the game differently – is a big ask of Dan.

Maybe if they tell Dan and Buck Martinez to pretend it’s a radio broadcast, that might serve everybody. But I don’t think so. I think you have to have a dedicated radio broadcast. That said, if anybody can pull it off, it’s Dan and Buck. They’ve been together a long time. The chemistry is there.

It’s a different skill, calling a game on radio, as opposed to calling it on television. Radio is the theatre of the mind. I’ve learned about this on The Debaters. Baseball on the radio takes me back to my childhood. I could have passed Tom Cheek on the streets as a kid and not known it was him. If someone had told me who he was, I probably would have lost my mind, because I listened to him more than I would listen to some members of my own family.

I think Dan Shulman might well be the best baseball broadcaster in any medium that we’ve had in Toronto. And I think Dan and Buck Martinez will be able to handle the simulcast. That said, I’m totally against not having a standalone radio broadcast. It’s too bad that Sportsnet won’t be out there trying to find another radio team like Tom Cheek and Jerry Howarth. 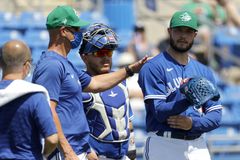 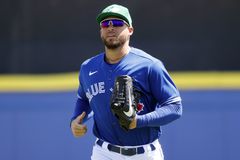 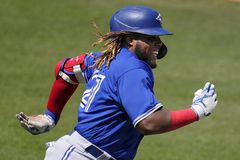