The slumping Edmonton Oilers fired head coach Todd McLellan early Tuesday in an attempt to salvage a season that has begun to slip away.

The Oilers have lost six of their past seven games and were looking more and more like the team that failed to make the playoffs in 2017-18. They have reached the postseason only once in a dozen years.

Ken Hitchcock, an Edmonton native with the third most coaching victories in NHL history, has been hired to replace McLellan.

He is the 15th coach in franchise history, but its eighth since 2009.

“I felt it was time to make a change,” Peter Chiarelli, the Edmonton general manager, said during a conference call from California with reporters. “We are in a bit of a rough patch here, and I felt we were seeing recurring themes that we saw last year.

“The antenna goes up when that happens.”

The search for a new coach began only hours after a lopsided loss to the Vegas Golden Nights on Sunday night. Chiarelli reached out to Hitchcock on Monday afternoon and a deal was agreed to during phone conversations throughout the day.

“I told him that if he wanted to apply, it would be a good tonic for the team,” Chiarelli said.

Hitchcock announced his retirement in April after being an NHL head coach for 22 years. He won a Stanley Cup with the Dallas Stars in 1999, and was awarded the Jack Adams Trophy as the league’s best coach in 2011-12 with the St. Louis Blues.

He will retain McLellan’s staff for the remainder of the season and was to meet with the Oilers players for the first time Tuesday afternoon.

It was believed for several weeks that McLellan’s job was at risk. Joel Quenneville, fired recently by the Chicago Blackhawks, and Alain Vigneault were among the names being bandied about as a possible replacement. Vigneault previously coached in New York, Montreal and Vancouver. In 2014, he led the Rangers to the Stanley Cup final for the first time in 20 years.

“There were other names we talked about, but Ken was the only one we talked to,” Chiarelli said.

McLellan was in his fourth season as Edmonton’s coach and had a cumulative record of 123-119-24 in 266 regular-season games with the Oilers. Outside of a trip to the playoffs in 2016-17, his tenure has been a disappointment. The team boasts the game’s best player in 21-year-old Connor McDavid and one of its most promising young forwards in Leon Draisaitl, who is 23.

Its goaltending has been subpar for the past two seasons and it has lacked for a supporting cast beneath those top two players.

“I am not absolving myself of any responsibility for the team’s performance and the slump we are in,” Chiarelli said. “I feel that I have been under scrutiny and justifiably so. If this means I am under further scrutiny, I understand.“

Chiarelli was hired as general manager and head of hockey operations by the Oilers in April of 2015. Some of the moves he has made since joining the team have backfired, including trading Taylor Hall to the New Jersey Devils for defenceman Adam Larsson, acquiring goalie Cam Talbot and signing bruising forward Milan Lucic to a seven-year, $42-million contract in 2016.

Larsson has helped to improve the Oilers on defence, but Hall won the league’s most-valuable-player award last year. Lucic has scored only twice in the past 66 games, and Talbot is also struggling badly. He was booed after allowing six goals against the Golden Knights on Sunday, and has not won in his five starts. During that tailspin, he has only stopped 85 per cent of the shots.

In Sunday’s defeat, Talbot allowed four goals in Vegas’s first 11 shots, and three in a span of 2 minutes 12 seconds.

The Oilers dressing room was quiet after the game. Players who spoke did so in hushed tones. For the first time, at least publicly, doubt seemed to creep in.

“It is tough to pinpoint what the problem is,” said McDavid, the captain. “We have to be mentally stronger. It is frustrating. There is no other way to say it.”

Alex Chiasson, a forward who won a Stanley Cup in Washington last year, said the team seemed to fall apart after allowing the first of those three quick goals, which came short-handed.

“It feels like we sat on the bench and just watched it happen,” Chiasson said. “We have to play the right way for 60 minutes and we haven’t been able to do that.”

Kyle Brodziak, a 34-year-old in his second tour with the Oilers, said the rest of the players have not done enough to help McDavid and Draisaitl. Between them, those two accounted for 24 goals and 51 points in the first 20 games.

“One guy or two guys can only take you so far,” Brodziak said. “There are 35 to 40 minutes in every game where they are not on the ice and the rest of us have to control it. We are not doing a good enough job of that.”

Brodziak pointed to the road trip, which began Tuesday night, as being critical. The Oilers play against tough opponents from the Pacific Division in the next three games.

“It is huge for us,” Brodziak said. “We haven’t played well lately. It is a chance to correct what is going poorly for us against three top divisional teams.”

“We have lost six of seven games in a multitude of different ways,” he said. “The season isn’t lost, but this needs to stop and we need to get back to playing the right way and winning.”

That still needs to happen, but if it does, it will be without him. He is the fourth NHL coach to be fired this season, following John Stevens in Los Angeles, Quenneville in Chicago and Mike Yeo in St. Louis.

“We have obvious areas where we need to improve, but I feel this team is good enough to win,” Chiarelli said. “With parity in this league, margins are slim.” 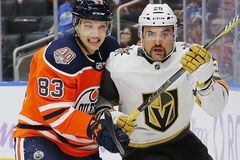 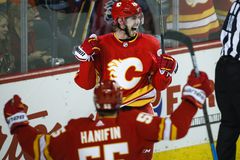 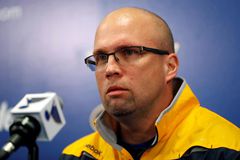