Not actually, but that’s when the result was reached. It was the seventh inning of Game 4. Alex Bregman hit a grand slam. The Houston Astros went up 8-1 on the hometown Washington Nationals. There was no coming back from that.

Friday’s game was not quite as lopsided, but equally plodding. It took three hours to play the first six innings.

This year’s World Series games are averaging just less than four hours in length. A lot of necessary things in life take at least four hours – a work day or major surgery – but none of them are considered entertainment.

When someone says to you, “How long will this take?” no one has ever replied, “Four hours.”

They say, “An hour” or “Two hours, tops,” because everyone knows four hours is way too long to do anything.

As such, Major League Baseball is no longer entertaining people. It is taking them hostage in front of the television.

Back in baseball’s golden age, the average game took less than two hours. Rules-wise, nothing was very different then. Nine innings, 27 outs each. They used fewer pitchers (the per-team average has risen from just more than one an outing to just less than five) and batters took fewer pitches, but that doesn’t account for hours of time.

What’s changed is the culture of baseball. It has morphed from something fun, meant to be done in a relative hurry, to something incredibly important that takes forever by design.

Each pitch is now be treated like a field goal being taken with no time left on the clock and the score tied.

The pitcher looks in for eons. He breathes in and out with great purpose. He shakes off a couple. He looks in some more. By this point, the batter’s timing has been put off, so he steps out of the box. He wraps and rewraps his already wrapped gloves for 10 minutes. He steps back in with his hand raised to the umpire. He needs a good while to get settled into the dirt, like a roosting chicken. Now that he’s ready again, it’s the pitcher’s turn to start over.

Of course, this all matters a great deal to the two individuals involved. Were you them, you’d take your time, too. But it is dreary to watch.

Baseball has made some half-hearted efforts to speed things up (for example, limiting mound visits) and neutralized them with others (manager challenges). Nothing’s changed. Nothing’s even been stabilized. Games are steadily getting longer.

Raising this issue has become a yearly ritual. It always takes place during the World Series, when the games are stupidly long and more casual fans are noticing that fact. It never gets anywhere because no one has a good solution to the problem.

Cricket – a game that takes days – tackled it by bowdlerizing the game. Test matches became one-day internationals became T20 (which takes about three hours). All that did was create three sports out of one, and didn’t really satisfy anybody. One supposes baseball could create three different kinds of baseball, except that baseball doesn’t really care about making its fans happy. It’s baseball. It’s above all that.

There are always radical solutions – a countdown game clock, reducing the number of innings played, limiting the number of pitchers allowed in a game. But all of them are non-starters because they attack profitability. The players won’t go for anything that means fewer players; the owners and broadcasters won’t go for anything that means less time for ads.

The problem isn’t the rules. It’s baseball itself. As with any other business entity, baseball wants to exist in a state of constant expansion. More time means more players involved means more ads means more money.

Only two things can turn this trend around, neither of which has anything to do with the rules as they exist.

The first is popularity. If people stop watching baseball, baseball will change. If they feel fairly certain that people aren’t watching because the games take too long, they will change that. We’re not talking attendance dips of a few percentage points each year (that’s already happening). We’re talking empty stadiums and gruesome TV ratings. When the New York Yankees can’t pull a good number in April, that’s when someone will start seriously talking about seven-inning games. And that’s never happening. Not in the foreseeable future, at least. Baseball is too essential to the United States’ self-image to fold up and die.

The second, and more likely, is a culture change within the game. At some point, someone is going to figure out an advantage in moving quickly.

Right now, when a pitcher throws at a batter who has only just stepped in and not yet begun his 15-step routine (touch helmet, grind foot, cock elbow five times et cetera), it’s called a “quick pitch.” That’s considered unsportsmanlike.

Some bright bulb who’s not quite an elite talent is going to start quick-pitching everyone, on every pitch. And when he gets away with it, others will pick up the practice.

This seems like a pretty obvious wrinkle. When the game has been designed by the best teams to move slowly, there is an obvious advantage for some middle-of-the-pack team to try going fast instead. It could be to baseball what the no-huddle offence was to football – a way to unsettle the rhythms of your opponent.

Will that ever happen? God knows. For a game that throws so much money into tactical analysis, baseball is terrible at tactical innovation.

But perhaps someone will eventually get tired of hanging around all night, only to lose in the end.

What baseball needs isn’t a full realignment of the rules. It needs a visionary manager or executive who decides things don’t have to be this way.

Opinion
Houston Astros’ Jose Urquidy went from nobody to somebody, in a championship that is no longer an underdog story
October 27, 2019 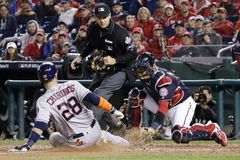 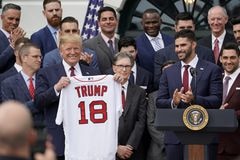 Opinion
Most hated team in sports? The reframing of the Houston Astros’ reputation
October 24, 2019