Of all the awful and ridiculous and simply unbelievable things that have happened to the Ottawa Senators over the past year, it is the smallest that most delights the comics and headline writers.

Earlier this month, with the Senators’ annus horribilis supposedly behind them, Health Canada issued a recall for red infant “onesies” that feature the team logo on the front and are fitted with small metal clasps.

The reason for the recall: choking hazard.

Barely a year earlier, the Senators had come within a Game 7 double-overtime goal of reaching the Stanley Cup final. One season later, they finished 30th – the singular bright note being that they were not, quite, the worst team in the league, a dubious honour that fell to the Buffalo Sabres.

But they were, without any doubt, the most dysfunctional. As respected TSN commentator Ray Ferrero put it recently, “They’re the laughing stock of the league. There’s nobody more comical, in a sad way, than Ottawa is now.”

Let us, then, count (some of) the ways – each one a step toward the June bombshell that makes all earlier team explosions appear as mere firecrackers:

All this, however, was nothing compared with what came next.

A week ago, news broke that Melinda Karlsson, wife of captain Erik Karlsson, the team’s best player and face of the franchise, had filed an order of protection against the girlfriend of forward Mike Hoffman, alleging that Monika Caryk had undertaken a covert cyberbullying campaign against the Karlssons, including anonymous attacks on their baby son, who was stillborn in March. In the application for a peace bond, Melinda claimed that the attacker wished her dead, as well, and hoped that someone would “take out” Erik’s legs to “end his career.”

Caryk and Hoffman were quick to deny any involvement and, while police are said to be investigating, no charges have been laid.

Hoffman and Karlsson had, ironically, combined little more than a year ago on what will likely stand as the Senators’ most glorious single play: a soaring Karlsson saucer pass from beside his own net that flew three-quarters of the way down the ice before landing, perfectly, on the tape of Hoffman’s stick, allowing him a clear breakaway in which he deposited the puck, one-handed, behind Boston Bruins goaltender Tuukka Rask.

But all that is in the past. This is the ugly present and, no matter what the legal outcome, the hockey outcome was never in doubt: one or the other, perhaps even both, would be leaving town – and most assuredly not going to the same destination. Hoffman seemed, by far, the most likely to go, as Karlsson is considered the cornerstone of any future return to respectability for the team. Fans are fearful that instead of being offered a rich extension to stay on beyond the end of his current deal, Karlsson could be dealt elsewhere for more cost-efficient players and prospects.

On Tuesday, three days before the NHL gathers in Dallas for the 2018 entry draft, where the Senators have the fourth pick over all, Dorion traded Hoffman to the San Jose Sharks, with the Sharks then handing him off to the Florida Panthers in a subsequent deal.

In exchange for the 28-year-old Hoffman – a proven goal scorer – along with a minor prospect, Ottawa received Mikkel Boedkker, a versatile 28-year-old forward who is Denmark’s highest-drafted player, and a minor-league defenceman.

Initial reaction in Ottawa was lukewarm to cool regarding the hockey sense the trade makes – something that cannot possibly be known for some time.

In common sense, however, the trade’s value was immediate. Never before in the game’s history, perhaps, has a trade announcement emphasized off-ice value above on-ice potential.

“Today’s trade,” Dorion said in a telling statement, “showcases our determination to strengthen the future of the team by improving chemistry, leadership and character in the locker room and on the ice.”

As of the moment, the on-ice concerns of this troubled team, deep as they are, are not the immediate concerns.

Senators’ Mike Hoffman traded twice in a day, less than a week after harassment allegations against partner
Subscriber content
June 19, 2018 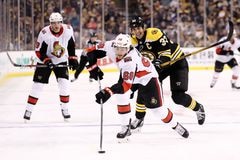 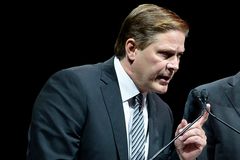 Analysis
From Stanley Cup contenders to this: How did the Senators hit such a low point?
June 14, 2018 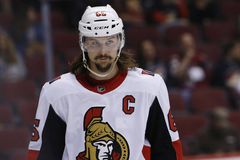