They gathered in a meeting room in the Toronto Blue Jays' offices on Thursday afternoon – an openly gay collegiate athlete, a crusader for gay equality in sports, and Yunel Escobar, the team's starting shortstop.

It was the first step for Escobar in trying to rebuild his sullied reputation after he displayed a homophobic slur on his eye-black while playing in a game this month.

"I think he thought it might be funny. Now he knows it's not," said Patrick Burke, the president of You Can Play, an organization that promotes equality, respect and safety for all athletes without regard to sexual orientation.

Burke, the son of Toronto Maple Leafs general manager Brian Burke, was a founder of You Can Play. For the meeting, Burke brought along Jose Estevez, 19, a distance runner at Boston College who is openly gay.

Estevez is of Cuban descent, and Escobar was born there. Estevez speaks fluent Spanish and lives a couple of kilometres from Escobar's off-season home in Miami.

"I feel like we really made some progress today with his feelings toward the whole issue," Estevez said.

It was Escobar's first game in Toronto since the incident on Sept. 15. His excuse for the slur – "Tu ere maricon," which translates as "You are a faggot" – was that he thought it would be funny, that the word in Spanish had a different connotation for Latin Americans. Escobar, who speaks little English, said he wasn't trying to be offensive.

The fans at Rogers Centre on Thursday night appeared indifferent toward Escobar as only a smattering of boos could be heard as he made his way into the batter's box in the first inning for his first plate appearance.

There had been even less reaction a few moments earlier when Escobar was sent out to catch the ceremonial first pitch thrown by David Testo, who came out last year as an openly gay soccer player after leaving the Montreal Impact.

When Escobar's anti-gay slander became public, the Blue Jays, after conferring with Major League Baseball, suspended Escobar for three games and he agreed to seek counselling.

Thursday's meeting was viewed as the first step for both Escobar and the American League team to try to mend fences for the athlete's embarrassing conduct.

"I wasn't sure what to expect going in, between the language issues and the entire incident, how it all went down," Burke said. "I was very happy.

"I thought Yunel was very receptive to what we were talking about. I thought he listened intently. And I really think he learned from what [Estevez] was talking about it. I think there was a genuine and legitimate change of heart that occurred."

Burke said he hopes the message will grow that homophobia in sports cannot be tolerated, but there is some work to be done.

The Blue Jays' Omar Vizquel, who hails from Venezuela, said he can sympathize with Escobar.

"I say that word and I understand it can't be used in meetings or relationships with Americans or Canadians," he said. "But we use it all the time, I don't see the big deal. That word … it's just another word so please don't put it [out of context]."

Toronto manager John Farrell said he considered for a moment not starting Escobar in Thursday's game, but quickly ruled that out.

"Let him take the field, go play the game," Farrell said. "I think it's important that we don't forget what took place, and we're not diminishing that. 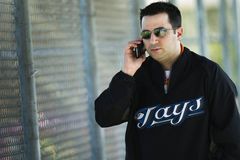 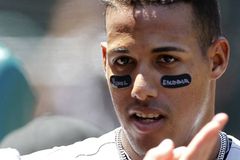