The boys of summer started gathering this week in this sleepy enclave off the Gulf of Mexico, and many harboured thoughts of a leisurely game of catch or shagging fly balls in the warm Florida sunshine.

Spring training for major league baseball players is an annual pastime. Millionaire athletes frolic outdoors in lovely weather, reminding the rest of us that summer is not as far off as it seems.

It was, however, a rude awakening for those members of the Toronto Blue Jays who arrived here on Thursday for an informal workout in weather more suited to woollen tuques and overcoats than shorts and T-shirts.

The temperature hovered around a un-Florida-like 7 C, but a stiff, unforgiving breeze made it feel much cooler. Forecasters warned that temperatures could dip to below freezing overnight, though conditions would start to warm up over the weekend.

"Man, it's a lot nicer in here," proclaimed Michael Saunders, the new Toronto left fielder, after seeking refuge within the heated sanctuary of the Blue Jays clubhouse following the workout at Florida Auto Exchange Stadium.

It was hard to feel much sympathy for a player who opted to wear a pair of shorts for the workout, weather be damned.

For winter-hardened Canadians who have come to grips with bone-chilling temperatures and heavy snowfall, the current conditions in Florida would be considered a lark.

But not here in the Sunshine State, where one local newspaper referred to the dipping mercury as "The Big Chill." The website of a Tampa TV station featured a weather story that warned people of the risks of hypothermia.

Still, the game has to go on – including for the Blue Jays who continued to arrive in Dunedin in dribs and drabs on Thursday – even though pitchers and catchers are not mandated to be here until Sunday, when physicals will take place.

Position players are not required to be in town until the following Thursday, making the Blue Jays one of the last teams to get going in both the Cactus League in Arizona and the Grapefruit League in Florida.

Another 13 clubs officially got rolling on Thursday, five of them in Florida, including the Baltimore Orioles in Sarasota, the Detroit Tigers in Lakeland and the Washington Nationals in Viera.

Apart from Saunders, a Canadian from Victoria, who was obtained from the Seattle Mariners in an off-season trade, most of Toronto's starting position players have yet to arrive.

That would include the likes of Jose Bautista, Jose Reyes and Russell Martin.

"Start of a new season, everybody's in first place and everyone's got one goal on their mind," Saunders said, explaining his itch to get going early. "For me, this is obviously a very exciting time. When I got traded I couldn't have picked a better team to get traded to. I grew up watching the Jays so I feel honoured to be able to put on that uniform.

"It's about being a kid and playing a kid's game. As long as you love what you do you'll never work a day in your life."

Upon their arrival on Thursday, many of the Blue Jays lugged bulging duffel bags into the clubhouse to set up shop for the next six weeks or so in preparation for the 2015 regular season.

The Toronto clubhouse contains about 70 stalls and on each chair rested a large, plastic bag containing a clear plastic cup and a skinny glass tube for the various samples they must produce during their coming physicals.

After changing quickly, the players headed outside for a brief workout that included batting practice.

Most of the players, in deference to the cold, wore layers of clothing from the top down, including skin-hugging tights to cover their legs.

The most noticeable pair belonged to Chris Colabello, a first baseman/outfielder who was claimed by Toronto off the Minnesota Twins in December and is a long shot to make the big-league roster.

Colabello's tights were a dazzling yellow that certainly made him a standout in the fashion sense.

Team trainer George Poulos was spotted walking around the field wearing a catcher's mitt, presumably to keep one of his hands warm. 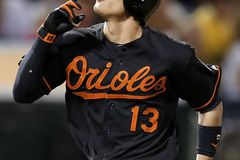 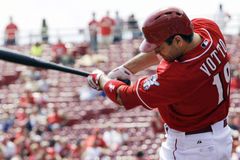 Sure sign of spring: Pitchers and catchers report this week to spring training
February 17, 2015 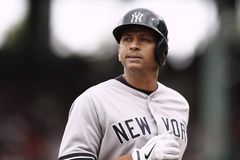