The Toronto Blue Jays want to finish their final series of the year on a strong note as they look ahead to the 2014 season. It could spell trouble for the Tampa Bay Rays as they make their push for the post-season.

Jose Reyes scored twice and R.A. Dickey was effective over 7 1/3 innings as the Blue Jays defeated Tampa Bay 6-3 on Friday night at Rogers Centre. The loss ended Tampa Bay's seven-game winning streak and prevented the Rays from moving closer to locking up a playoff spot.

Tampa Bay (90-70) is tied with Cleveland for the two American League wild-card spots and Texas is a game back. The Indians hammered Minnesota 12-6 and the Rangers kept pace with a 5-3 win over the Los Angeles Angels. The Blue Jays (73-87), meanwhile, are last in the A.L. East and have been out of playoff contention for weeks.

"We're playing hard, we're not going to give games away right now," said Toronto second baseman Ryan Goins. "We have a nice chance to play spoiler here at the end so it's going to be fun."

Tampa Bay can still host the wild-card game by beating Toronto in both games on the weekend.

Dickey settled down after giving up early solo homers to Ben Zobrist and Delmon Young. The Blue Jays put up four runs in the fourth and added a pair in the fifth as they improved to 39-40 at Rogers Centre this season.

"It's one of those games," said Tampa Bay manager Joe Maddon. "We've been on a pretty good run. (We'll) go get a good night's sleep and come back tomorrow."

Dickey, who won the National League Cy Young Award last season with the New York Mets, started slowly this year but bounced back in the second half. Toronto manager John Gibbons said Dickey deserves credit for his 14-13 record.

The veteran knuckleballer felt that the Blue Jays have a lot of positives going for them heading into next year. Dickey, one of several big-name additions in the off-season, feels that having a full season together as a team is important going forward.

Tampa Bay turned in a rare sloppy defensive effort with three errors on the night. Rays starter Jeremy Hellickson was perfect his first time through the Toronto order but the Blue Jays got the bats going in the fourth inning while taking advantage of some miscues.

Reyes singled to get things started and moved to second on a sacrifice bunt by Munenori Kawasaki. Brett Lawrie of Langley, B.C., reached on an error and Moises Sierra drove in Reyes with a single to right field.

With runners on the corners, Anthony Gose hit a blooper to shallow centre field that dropped in for a hit. Outfielder Sam Fuld's throw to the plate was not in time to catch Lawrie.

Goins followed with a base hit to centre that Fuld misplayed for an error. The ball rolled all the way to the wall, allowing Sierra and Gose to score easily.

"You can't really imagine a worse scenario as an outfielder," Fuld said.

Goins tried to score but was thrown out at the plate for the final out.

Hellickson issued a pair of two-out walks in the fifth inning and both runners came around to score. Lawrie singled home Reyes and Kawasaki came across when Sierra reached on an infield single.

Wesley Wright relieved Hellickson and struck out Gose with runners on the corners. Hellickson (12-10) allowed six runs — three of them earned — along with six hits and two walks. He had five strikeouts.

"The guys have been picking me up all year, offensively and defensively," Hellickson said. "It would have been nice to pick them up for once."

Tampa Bay loaded the bases in the eighth after two Toronto errors and a walk to Zobrist. Sergio Santos relieved Dickey and needed just one pitch to get James Loney to ground into a double play.

Santos gave up a run in the ninth before striking out pinch-hitter Luke Scott. It was his first save of the season.

Dickey's knuckleball was floating nicely and he mixed up his speeds to keep the Tampa hitters guessing. He allowed two earned runs, five hits and a walk over 7 1/3 innings while striking out three.

Zobrist opened the scoring in the first inning by taking a 3-0 pitch over the right-field wall for his 12th home run of the season.

Young followed an inning later with his third homer of the year and 100th of his career. Toronto left-fielder Kevin Pillar helped keep it a one-run inning with a great diving catch on a shallow flare off the bat of former Blue Jay Kelly Johnson.

Notes: Dickey leads the Blue Jays with 19 quality starts on the season. ... Lawrie was hit in the mouth by a pitch from Roberto Hernandez in the seventh inning. His lip was cut but he stayed in the game and stole second base two pitches later. Lawrie later came out of the game as a precaution. "He's a tough dude, you know," Gibbons said. "He's Canadian. Does that surprise you that he stayed in the game, for a while anyway?" ... Blue Jays first baseman Adam Lind sat out with a sore back. He hopes to return Saturday. ... The Rogers Centre roof was closed. Announced attendance was 27,288 and the game took two hours 42 minutes to play. ... Toronto left-hander J.A. Happ (4-7) is scheduled to start Saturday afternoon. The Rays will counter with right-hander Chris Archer (9-7). ... The Blue Jays dropped two of three in Baltimore earlier in the week to finish with a 34-47 road record on the season. 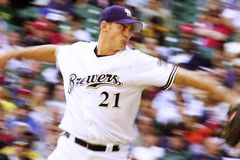 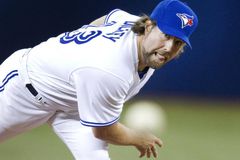 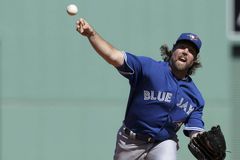