The most important acquisition Alex Anthopoulos has made during his six-year tenure as general manager of the Toronto Blue Jays settled into the batter's box in the first inning of Sunday's game against the Detroit Tigers.

It wasn't a long stay for Josh Donaldson.

With Jose Reyes taking his lead after a leadoff double, Donaldson swung at the first pitch he saw from Detroit starter Justin Verlander and stroked a grounder through the middle of the infield to cash the game's first run.

Donaldson's presence at first was an obvious concern to Verlander, who made an errant pickoff attempt. His throw was high and the ball tumbled deep into foul territory down the right-field line.

Donaldson was able to scamper all the way to third on the throwing error.

Win or lose, Donaldson has exhibited an innate ability to factor into almost every game he plays for the Blue Jays, and Sunday was no different.

In the Tigers' third, with Toronto still holding a slender one-run lead with two out and a Detroit runner at second, Donaldson deftly went airborne to pluck a line drive from Victor Martinez, saving a run.

For good measure, Donaldson drove in another run in the fifth, when the Blue Jays scored six runs – Jose Bautista and Justin Smoke also homered in the inning – to subdue the Tigers and avoid a three-game sweep with a 10-5 verdict at Comerica Park.

The Jays, 43-41, dropped two of three in Detroit but are still in the playoff hunt in the clustered American League East standing.

Most people knew going into the game that Donaldson, who is leading or among the leaders in most of the key offensive categories, was an all-star.

Sunday night, in a live television broadcast, the league made it official, revealing that Donaldson finished as the overall leader in fan voting and will be the starter at third base for the July 14 gala in Cincinnati.

It marks the second time that a Blue Jay player has led the way in fan voting with right fielder Jose Bautista turning the trick twice in the past four years, most recently in 2014.

Donaldson, in his first season for the Blue Jays after a multiplayer trade in the off-season with the Oakland Athletics that included native-born son Brett Lawrie going the other way, garnered just over 14-million votes, a record high.

Not a bad accomplishment for a 29-year-old from the southern United States whose ascent to the top of the voting was nudged along by Don Cherry, who used his Hockey Night in Canada pulpit to stump for Donaldson in mid-June.

The cause was also endorsed by Stephen Amell, the Toronto-born star of Arrow, a U.S. television series, who urged the public to get on their computers and vote for Donaldson.

It all helped boost Donaldson's popularity as he went from trailing Mike Moustakas of the Kansas City Royals by 1.9 million votes in the race for the AL all-star third baseman spot to top spot overall.

"It's incredible," said Donaldson, who was voted to the all-star team for the first time last year.

Toronto manager John Gibbons was effusive in his praise of Donaldson, who is not only a catalyst on baseball's most explosive offence but also a firebrand in a clubhouse that had become almost complacent before his arrival.

"First off, he's one of the top players in the game. That's a given," Gibbons said. "You guys see that every day. He's got a different kind of personality, a different kind of mentality. I've said before many times that we needed it on this ball club. He's a guy that keeps pushing, pushing. Never takes an inning off."

Donaldson's production speaks for itself.

He collected two hits on Sunday to give him 30 multihit games on the year, ranking him third among all position players in the AL.

"I don't know where we'd be without him," Gibbons said.

Donaldson has quickly endeared himself to Canadian baseball fans for his all-out, damn-the-consequences style of play.

He's a gem defensively, superb with the glove and possessed with a gun of a throwing arm.

In a game June 24 against the Tampa Bay Rays, Donaldson made a stunning catch at Rogers Centre, leaping head first into the second row of stands to snare a foul ball hit by David DeJesus.

"It's a big honour to represent this team for how many good players that we have on this team," Donaldson said. "It's an honour to be ticketed by the fans.

"Honestly I can tell you I would never expect this. Kind of mind-blown a little bit from it." 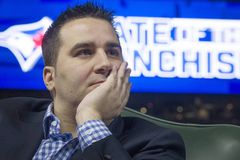 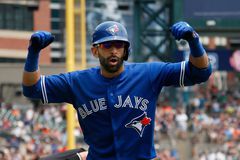 Blue Jays' Hutchison continues to struggle on the road
July 3, 2015 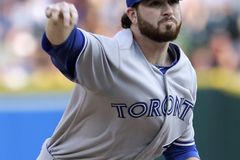