If you met Jays GM Alex Anthopoulos on the road to the afterlife, he'd talk your ear off about the benefits of choosing Hell.

There is no good idea that Anthopoulos cannot swivel in the midst of with a "That being said …" and argue the other side of with equal vigour. It's not that he believes in it. He just wants to give even the dumbest notions a chance to be heard.

In Sunday's annual summation of the season, le philosophe in charge of the team was busy seeing all sides of all things. He's the only executive in sports that thinks the way Picasso painted.

Things weren't great, but they were also great.

Disappointed? Sure. But excited about the off-season.

Do they have any money? Yes. Also, no. What do you mean by 'money'?

Is Brett Lawrie your third baseman? Yes. Unless we like someone else there. Then he's the second basemen.

Will the young corps of pitchers feature next year? No. But they may.

One has nightmare visions of going to the movies with Anthopoulos and making the mistake of asking, "What do you want to see?" Five hours later, he'd still be on the curb talking while they turned off the marquee.

There was only one matter on which Anthopoulos could offer certainty going forward. Asked how confident he is that he can go into whatever Star Chamber the decision makers at Rogers are using this week and ask for big money to spend in free agency, Anthopoulos said, "Very."

Then he spent five minutes explaining why that wasn't precisely true.

Theoretically, there is money to be spent. They're spending it on the likes of Jose Reyes and Mark Buehrle. What the Jays will not do is commit to major new spending of their own devising.

"We're not going to deviate from our policy on length of contract," Anthopoulos said. "I can adamantly say you won't see any eight-year, nine-year, 10-year deals. Our five-year policy is still firmly in place. That's not going to change. I still believe that with that we can be very competitive. I still think there's a lot of good free agents that, if we need to go to five years, we'll be able to sign them."

So, it doesn't sound as if we're even that sure about five years any more.

Anthopoulos's line of reasoning here is sound. The problem is that it's financially wise, rather than sound in any baseball sense.

"We're not believers in those eight-, nine-, 10-year deals, not because the talent isn't there and the players aren't there. Too much can happen. I understand that will take us out [of the running] on some players, but it's something that, philosophically, we're opposed to."

If you own a piece of the team, it's a terrible deal. Cano will spend three or four of those 10 years as an increasingly rickety designated hitter. There is no added value to be found here – the cornerstone of any smart business decision.

If you're fan, it's a great idea because it's working right now. Cano is a world-beater. He'll get a bunch of MVP votes. If he'd been in the Jays lineup, we'd be looking forward to another game on Tuesday.

But most important, the Cano deal is a good one for fans because it's not your money.

This isn't a salary-cap league. There are no tactical arguments against giving a player more than he deserves. Unlike in hockey or basketball, all overspending costs you is money. Unlike opportunity, money is a renewable resource.

Overpaying a Cano (or a Justin Verlander, or a Mark Teixeira, or a Prince Fielder) need not affect a baseball club's ongoing ability to field a quality squad as long as you keep spending.

Will dropping gobs of cash guarantee success? No. Will it nudge you a little further in that direction? Of course it will. And it's not your money.

When Anthopoulos, acting as sympathetic proxy for the Rogers board, says that this is a "philosophical" position, what he means is that they'd rather make a lot of money off the Blue Jays than a little. By "philosophical," he means 'cheap.'

Viewed from the wonky perspective of value over the life of a contract, no 10-year deal makes sense. But from where a fan sits, a few years of all-star level production looks good regardless of the price. A final reminder – it's not your money.

By this rationale, the Jays would not have extended Evan Longoria or Clayton Kershaw. By this rationale, they have no shot at any of the premier starters available on the market this winter. Less than none. The Jays will never again sign an established superstar as a free agent. Ever. Think about that for a while.

By this rationale, the Jays are never going to be a team willing to take the financial risks necessary to bump your playoff chances from marginal to middling (because that's the best they'll ever get).

Essentially, the future of this club is now a function of good fortune. Maybe the Jays will stumble into a generational talent of their own creation. They haven't managed it since Roy Halladay, but what the hell?

There is no more undependable force in sports than luck. Luck is nowhere less dependable than in baseball.

But, on the flip side, it is free. 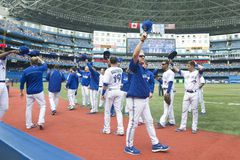 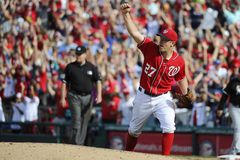 Athletics fail to clinch playoff spot; wildcard lead down to one game
September 28, 2014 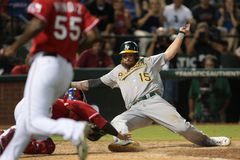 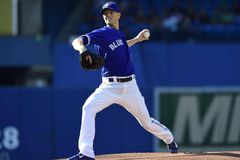