One year later, James Paxton has no regrets.

The pitcher from Ladner, B.C., was the first Canadian taken at last spring's Major League Baseball draft, selected 37th overall in the supplemental first round by the Toronto Blue Jays, who failed to sign him to a contract by an August deadline because they would not meet Paxton's signing-bonus demands.

Paxton, 21, says he doesn't begrudge the Jays for not meeting terms, nor president Paul Beeston, who compromised his amateurism with some out-of-school comments last summer. What ensued was a legal fight against the University of Kentucky and the National Collegiate Athletic Association, a battle Paxton's lawyer called a "civil rights case."

The battle has brought Paxton to an independent league in Texas, where he will make three more starts before the June 7 first-year player draft. The left-handed flamethrower is again expected to be selected in the first round.

"[The past year]didn't exactly turn out the way I expected it to, but it has been an experience," Paxton said from Texas last week. "I can't look back and see any regrets. The way things are going now, I'm pretty comfortable with where I'm at."

Intent on finishing his senior season on the mound and graduating with an accounting degree, Paxton returned to Kentucky last summer and almost immediately began facing questions about the nature of his relationship with agent Scott Boras. Court documents later revealed that the NCAA was tipped off by a blog entry on globeandmail.com, in which Beeston suggested the Boras-Paxton relationship violated the NCAA's "no agent rule."

"Because it was Scott, the way you deal, you deal through him," Beeston said. "You don't deal through the family."

Amateur ballplayers are allowed to have so-called "family advisers," but risk forfeiting NCAA eligibility if "agents" become too involved in contract negotiations. It's a fine line, and there is a wink-and-nudge nature to the dance.

"That's how it operates," father Ted Paxton said. "It's just that it came to the attention of the NCAA."

Ted Paxton said the family was "surprised and confused" by Beeston's remarks, but is not bitter.

The younger Paxton, deemed the top college senior by Baseball America, refused to talk to NCAA investigators, fearing he would be suspended by Kentucky for simply attending an interview. Pre-emptively, his camp filed suit against the university, seeking an injunction that would compel Kentucky to let him play, and claiming rights violations under the state constitution by virtue of his student-athlete status.

Kentucky feared NCAA sanctions if Paxton played, so while the lefty honed his craft at the school's ballpark through the winter, his eligibility for the season-opener in February was in doubt. In December, the school filed a motion saying that Paxton's scholarship would be honoured, and that he remained a "member of the team."

But it did not specify that Paxton would be allowed to play. Instead, Kentucky included The Globe's August blog post in the evidentiary section of its 87-page filing, suggesting the no-agent rule had been breached.

Paxton was expected to be drafted higher last year, but teams feared both his bonus demands and Boras, called "one of the shrewdest and best-prepared negotiators in sports" by Beeston. Toronto offered a bonus in excess of $873,000 (all currency U.S.), the figure recommended by MLB's head office, but it was not enough, and Paxton was one of two highly drafted Canadian pitchers who did not sign with the Jays.

"I don't really know what their motivation was, or what their tactics were," Paxton said. "It's too bad we couldn't get something figured out. We both kind of agreed to disagree."

Out of options, Paxton left school this spring. He considered appealing to Kentucky's Supreme Court, but his lawyer, Richard Johnson, said it would have been "futile" because the case would not have been heard before the end of the Wildcats' season.

Paxton's last day on campus was April 28. He is one semester shy of his degree.

In a blistering, 1,200-word letter to Kentucky media outlets in March, Johnson said Paxton would have won in a higher court, citing the case of former college pitcher Andy Oliver, now a Detroit Tigers prospect. Oliver, also represented by Johnson, was successful in an Ohio court proceeding last year, which invalidated the no-agent rule and restored his playing eligibility.

Johnson's letter cited six instances where Paxton was allegedly denied due process by either the school or NCAA.

"At some point, James believes you have to stand up for what is right, and James has decided to do so by taking a leave of absence from the university," the letter read. "James understands that his life will be defined by his principles, and he is making a heartbreaking sacrifice to stand up for what he believes is right."

Paxton has, officially, turned professional, signed with Boras, and joined the Grand Prairie AirHogs of the American Association of Independent Professional Baseball. He has made two starts and allowed three runs on five hits and four walks. He has eight strikeouts in nine innings.

But the gamble appears to be paying off.

Paxton is ranked as the 12th overall prospect, according to ESPN draft guru Keith Law, second best among southpaw hurlers. Most of the top college pitchers in this year's crop have faded down the draft-day stretch, whereas Paxton is back on the mound, showing scouts his new changeup and a fastball that touches 95 miles an hour.

Players without college eligibility typically have less negotiation leverage, but should Paxton be selected among the top 15 picks, his slot bonus could be twice the figure he turned down last year.

"If I get treated fairly and feel like I'm getting the right amount, I'll probably sign," he said. 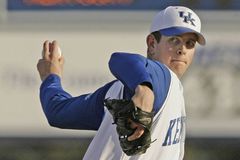 The letter from Paxton's lawyer
May 24, 2010
Follow Matthew Sekeres on Twitter @mattsekeres
Report an error Editorial code of conduct
Due to technical reasons, we have temporarily removed commenting from our articles. We hope to have this fixed soon. Thank you for your patience. If you are looking to give feedback on our new site, please send it along to feedback@globeandmail.com. If you want to write a letter to the editor, please forward to letters@globeandmail.com.
Comments