For a non-existent team, the Montreal Expos are hugely popular.

The franchise that set the standard for fun disappeared ignominiously in 2004. But the passion remains potent as Expos heroes become Hall of Famers and new analytic methods bring overlooked greatness into the open.

In his book, Up, Up & Away: The Kid, the Hawk, Rock, Vladi, Pedro, le Grand Orange, Youppi!, the Crazy Business of Baseball, and the Ill-fated but Unforgettable Montreal Expos, Jonah Keri recovers the achievements of the players known as Nos Amours. And he explains why "the team whose time never came" is now enjoying its moment.

The Expos ended badly in 2004, so what's to celebrate?

The Blue Jays are playing two exhibition games at the Big O next weekend and people are saying, wow, there's baseball in Montreal for the first time in 10 years. Feasibility studies are being done to bring back a major-league team. I'm not delusional, but there's still something there.

For me personally, as a Montrealer, it's not just a baseball team – it's my upbringing, The Expos were at the nexus of everything. When the Hall of Fame catcher Gary Carter died, I was crying at the breakfast table. Why? Because Gary Carter reminds me of my grandfather taking me to the ballpark, because he reminds me of the friends I grew up with and the games we went to.

Montreal was a very different experience for major-league baseball, wasn't it?

It had a certain something. I'm not going to lie, some of it was because of the strip clubs, maybe, or the great food. But much of it was the unique culture. You know, when you heard the public-address announcer say "le voltigeur de centre, the centre fielder, Andre Dawson" – that's special. And they had to figure out a lot of these terms on the fly. Jacques Doucet, the play-by-play man, goes on the air and says, "We need a term for picking someone off first base." This is a very complex idea to express and a professor came up with "prendre quelqu'un à contre-pied" – catch someone on their wrong foot.

Balle papillon, the knuckleball – in French, the butterfly, fluttering and dancing. It's so lyrical.

What did the Expos players make of this unusual baseball city?

To a man they all said this was the best time of their career. And I was surprised by that since obviously you never won a World Series if you played for the Expos. But then I thought about it: Almost every guy played for the Expos when young, because it was a given that if you were developed by the Expos, you'd eventually move on to greener pastures. So you're 21, 22, with the boys, and it's a special time.

Almost all of them ended up living downtown. You'd see them walk out of the Manhattan building at Guy and Lincoln, get on the Métro and be at the ballpark 15 minutes later. The team was closer to the fans, which made the whole experience more vivid. Players were a part of the community, it was almost a Brooklyn Dodgers vibe.

But there was also a lot of drugs and partying?

They did like to have a good time and it definitely had an impact on the team. But I stopped short of saying that was the reason why the potential dynasty of the 1980s got dismantled. From an analytical point of view, they had a stars and scrubs roster – they had Tim Raines and Andre Dawson and Gary Carter and ignored the fact that their primary second baseman hit zero home runs in six total seasons.

Expos fans like to say that baseball failed Montreal when the team moved away. But you say that Montreal should share the blame.

That may get me run out of town. I do not mean the fans. I'm talking about the corporations – nobody stepped up and said, I've got a billion dollars, I'm going to make this happen. Charles Bronfman was the very wealthy owner for a long time and he sold the team just when the economy wasn't great at the beginning of the nineties. A Hail Mary consortium of some of the wealthiest companies in Canada came in and said, we're keeping the team in Montreal, we're heroes, we're great, here's $5-million, never bother us again. There was a lack of vision.

Could Montreal be a baseball town again?

There are definitely enough fans, but you still need the billionaire – one who's willing to finance it properly and be involved for the long haul. Warren Cromartie, the Expos outfielder, has come in and said, let's try to do something. He doesn't have $600-million but at the very least, he's an avatar for a movement. And the timing is much better for small-market teams in baseball with revenue sharing and huge TV deals.

In the meantime, Expos fans wear the jersey of a team that has disappeared. What's that like?

We can romanticize about it. Yes, the Expos were irrelevant by 2004. But it's like when you listen to classic rock, Stairway to Heaven, what a great song. You know how many bad songs were written when Stairway to Heaven came out? But we can pick and choose what we want to remember. And that's what it's like with a dead franchise.

I'm not this crazy dad who wants to brainwash his kids into cheering for a team that doesn't exist. But when they get older, they'll understand that this is what was important to me – and to the great-grandfathers you never got to meet. It's about those ties. 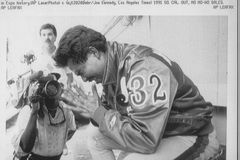 Blair: Montreal should make the most of exhibition baseball games
September 10, 2013 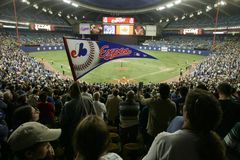 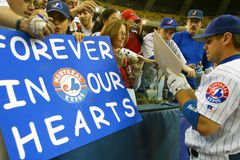 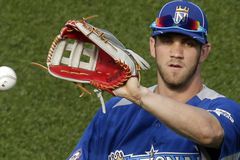