It wasn’t the World Cup finish that Canada’s men’s basketball team had envisioned only several weeks ago.

Canadian basketball seemed poised for a breakout summer; the season the team was stocked – finally – with NBA talent. There was even talk of climbing the medal podium in Canada’s first World Cup appearance in almost a decade, and clinching one of the seven Olympic berths up for grabs.

But while the world’s top teams were gearing up for the quarter-finals and medal rounds, Canada was making an early exit, wrapping up its FIBA World Cup with an 82-76 loss to Germany in a classification game Monday.

Moments after the loss, new coach Nick Nurse preferred to look at the positives he’ll take away from China. The biggest is that Canada still finished high enough (21st over all at the 32-team World Cup) to earn a second – albeit difficult – shot at qualifying for the 2020 Tokyo Olympics.

“I love national team basketball. I think that there’s something really special about these guys putting it on the line for their country and giving up this time, and to me it’s the purest form of basketball we have. So I love that,” Nurse said.

Kyle Wiltjer had 18 points, while Khem Birch added 15 to lead the Canadians, who went 2-3 in their first World Cup appearance since 2010. Cory Joseph added nine points.

Dennis Schroder had a team-high 21 points for Germany, while Max Kleber finished with 20.

Canada was expected to learn its final World Cup placing later Monday when FIBA announced the 17th- to 32nd-place finishers.

That the 23rd-ranked Canadians were relegated to the classification round at all will be deemed a disappointment for a country that boasts the second-highest number of NBA players outside the United States.

One NBA star after another opted out of national team duty, leaving Birch and Joseph as Canada’s only NBA players in China.

“I think it was a learning process,” Wiltjer said. “Obviously we came up short of our goals for this tournament, but the dream is still alive, hopefully. We have a lot of bright spots from this team and a lot of guys want to represent their country. We just want to continue to get better and keep going forward.”

The Canadians’ World Cup dreams died quickly in China. They were relegated to the classification round just two games into the tournament, with losses to No. 11-ranked Australia and No. 6 Lithuania.

“I think we played some really good competition, it was a good experience for us playing Australia and Lithuania in the group, and then [we] ended up playing Germany in this side of the pool as well,” Nurse said. “Three very highly, highly ranked teams, so it was good for us to get some good competition, thought we played some really good basketball.”

“Obviously you always want to perform better. But really that is the most wins we’ve had in a quarter century at the World Cup,” Canada Basketball general manager Rowan Barrett said. Canada went 0-5 nine years ago in Turkey.

“I think as you start your evaluation, you start with wins and losses,” Barrett added. “It looks like our goal of working to get to the Olympics is still very much there. So while you would have loved to get there straight on from here, there is still no guarantee that you can. Even if things worked out the way we wanted with every single thing this summer, I think a call here or an injury there can impact every single thing you are doing.”

Barrett later told reporters on a conference call he had no plans to resign.

The game capped a six-week odyssey that took the Canadian team to Winnipeg, Australia and China. Now, Nurse and Canada Basketball will turn their attention to next June and their second-chance Olympic qualifying tournament. Just four spots for the 2020 Tokyo Games will be up for grabs – so Canada must win its six-team tournament and, on the heels of its disappointment, will likely have a low seed and end up in a tough group.

The big question for Canada: who’ll turn out to play?

“We had moments in this tournament where we played really well, and we had some times where we didn’t, and that was a microcosm of our situation this tournament,” said Ejim, whose son Miles was born back in the U.S. on the morning of Canada’s opening game. “Would’ve liked to have played better those first two games. … But I thought we came out, we played hard and we tried to give ourselves a chance.”

Germany took an early seven-point lead Monday night in a noisy and nearly-full Shanghai Oriental Sports Centre arena. Andrew Nembhard, with a behind-the-back dribble, layed it in to cut Germany’s lead to 17-12 leading into the second.

The Canadians opened the second quarter with a 20-10 run, and when Kaza Kajami-Keane drew a foul for a couple of free throws midway through the period, Canada was up by six. Schroder drove to the hoop for a layup that sent Germany into the halftime break up 36-33.

Both teams battled hard in the second half and the game went into the fourth quarter knotted at 56-56.

Germany opened the fourth on a 7-0 run. But Birch then sprinted to a long, leading pass and finished with a dunk that cut Germany’s lead to two with six minutes to play. Wiltjer connected on a three to tie the game a minute later, but that was as close as the Canadians would come. Joseph connected on a three with a minute and a half to play, but Germany responded to every one of Canada’s baskets.

Nurse has griped about the referees all tournament long. He couldn’t understand why, out of the 84 countries to draw from, Canada had the same referee – Bulgaria’s Martin Horozov – for four of its final five games. Horozov was quick to call a technical on Nurse when the coach argued a call late in the first quarter.

Officials ejected Germany’s Paul Zipser in the third quarter after he picked up two technicals. 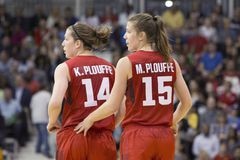 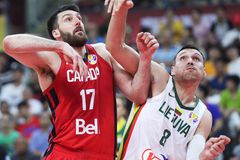 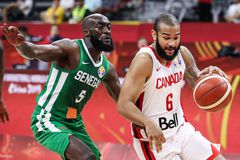