Midway through the Milwaukee-Toronto series, one of the agents for Bucks star Giannis Antetokounmpo did what people do nowadays on social media – tried very hard to get himself fired.

Like a lot of others, Georgios Dimitropoulos was angry at Drake. The world’s most famous fan had been out there on the sideline doing sensual massage and taunting Toronto’s opponents, in particular Mr. Antetokounmpo.

“Never seen anything as disrespectful as this before,” Mr. Dimitropoulos tweeted, in part.

Seriously, pal? Never? This must mean you haven’t been in an airport.

In that small, petulant and colossally ill-advised moment something became clear – Drake had won. After all these years, he had finally reached his full potential as a psychological weapon.

That’s why they gave him those sideline seats. It’s not to create memes. NBA teams have back room internet monkeys who do that work for them.

Drake – one of the most recognizable people on the planet – is a human noise generator, one set at a frequency only the other side can hear. Mr. Antetokounmpo obviously heard it. His agent was dumb enough to let people know he had.

In a more confident country, everyone would be delighted and emboldened by this. But Canadians seem mildly embarrassed by the whole thing. Why does Drake have to be so, I don’t know, garish? Can’t he keep it down a little? People are trying to sleep through life over here.

Though Drake gets an outrageous amount of press, very little of it is devoted to how much good he does on behalf of the side. By “side,” I don’t mean the Raptors alone. I mean the team, the city, the country, the whole shemozzle.

Drake is an unironic example of how boosterism should work in a place that gets itchy at the thought of self-promotion. (Case in point: the league called the Raptors on Wednesday to ask the team to tone down his sideline behaviour.) He’s having fun. Now that the NBA Finals are (finally, thank God) about to start, the rest of us might think about trying it.

When you talk about matchups in the coming Toronto-Golden State final, there are a few that won’t get enough attention.

Drake vs. Draymond Green: Size advantage for Mr. Green, but Drake’s bodyguards are always close and they’re both as big as Hondas – one’s an Accord, the other’s more of an Odyssey.

Drake vs. Steph Curry: No one at the NBA or ESPN will say it, but this is rights-holder wish-upon-a-star stuff. A single midgame interaction between the two will make this series appointment viewing for people who don’t watch basketball, don’t like basketball or have never heard of basketball.

Drake vs. U.S.A.: We’ve wanted to fight these guys for a long time. Nothing ugly, just a straight-up dukefest. They have the numbers, so we’re sending out our best man. Let’s see if they have the guts to do the same.

When Drake first got formally involved with the Raptors, there was a different vision for what he would do.

He had apparently been trying to hook up with his childhood team in some fashion for years. No one at team owner Maple Leaf Sports & Entertainment had the sense to return his calls.

When Tim Leiweke took over MLSE in 2013, he had two big ideas about basketball – hire Masai Ujiri and find a pitchman. It was taken as a given that the team was unsalvageable and would have to be burned to the ground. He needed someone to give Mr. Ujiri public cover while he did that.

Drake’s job was to make an unwatchable product palatable through the application of celebrity. Mr. Leiweke had Justin Bieber’s agent, Scooter Braun, make the introductions. The deal was formalized over dinner. Mr. Leiweke brought Mr. Ujiri. Drake brought his DJ. A few weeks later, Drake was unveiled as the team’s “global ambassador.”

The intersection of superstardom, a fan’s lack of scruples and a quasi-official team job in just one person discomfited the NBA. At one point, the league fined the Raptors US$25,000 after Drake did what all hip-hop stars do – flirt with players on behalf of the hometown club. In that case, it was an onstage shout-out to current Warrior Kevin Durant.

Someone at the league vaguely suggested the fine could be lifted if the team cut formal ties with Drake. Mr. Leiweke told them he was happy to pay it.

Drake’s other function was to back a branding reboot. He was invited to offer his ideas on what might be tweaked. The only thing off the table was the team’s name.

While he was doing that, the Raptors spontaneously untanked their tank. They traded away their biggest name – Rudy Gay, we hardly miss you – and suddenly got a lot better. The tank was eventually called off altogether.

Toronto made the playoffs for the first time in years. People who hadn’t cared were excited. Suddenly, wholesale change didn’t seem like a great idea.

So Drake’s suggestions – logo alterations and a major palette switch from red to gold – were shelved. Understandably, Drake was not best pleased. For the next little while, he was seen less often at games.

Eventually, Mr. Leiweke left. Drake’s most direct link to the team was gone, while the corporate structure was becoming less freewheeling and more suit-and-tie. You got the sense that a very Toronto sports thing – taking a good acquisition, misusing him, then sending him away bitter – was about to happen.

But with no particular reason to do so other than fandom, Drake hung in. He never badmouthed the organization. He never moped. He was always there when it mattered. Now it has never mattered more.

For the past few days, the Golden State Warriors have been forced to repeatedly engage with the idea of Drake and what he means.

Someone asked the Warriors’ Klay Thompson a softie about giving Drake songs a pass for the next while. Mr. Thompson responded with an answer so thoughtful, he must already have given serious consideration to this pointless exercise.

In light of that, maybe the rest of us ought to cut the guy a break.

If you have found yourself being one of those people – wincing or piling on when others make fun or nodding along with the idea that Drake is a bit much – then stop that. It makes you a killjoy, and you’re missing the point. That’s his job. He is Kawhi-ing it. Now that they are seriously in it against what might be the best team ever, the Raptors need the help.

In a best-case scenario, we can agree that someone doing something for no other reason than love of home is a remarkable positive.

Drake is a mirror, reflecting the best part of the city back at the rest of us. The one that believes in itself and isn’t afraid to say so.

It’s the truest sort of patriotism, one that isn’t ugly or closed. It’s wide open. Everyone’s welcome into the tent that Drake is helping erect. All you have to do is show up and agree that having fun is fun. Even if you’re Canadian.

Raptors forward OG Anunoby listed as questionable for Game 1
May 29, 2019 Ujiri says ‘Dwane Casey and DeMar DeRozan are part of this’ as Raptors prepare for NBA Finals
May 29, 2019 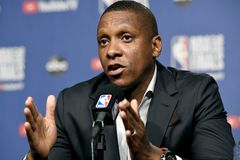 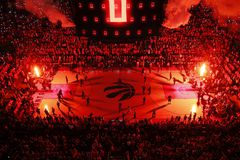 Toronto Raptors Kawhi Leonard and Kyle Lowry on opening the NBA Finals at home in Toronto
2:06
May 29, 2019 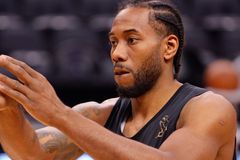