After Wednesday night’s Raptors-Nuggets game, Toronto’s Kyle Lowry gave what was very clearly a farewell presser. It was an Academy Awards speech, the sort where you thank everyone you can think of for their love and support.

Drake called him in the middle of it because that guy has a compulsive need to be part of every big Raptors story. This was going to be the last one for a while.

Lowry’s teammates and coaches valourized him. The career obits were rolling in online – The Greatest Raptor Ever.

It was so blindingly obvious that Lowry was being traded the next day – deadline day – that everyone had started moving on to thinking about the rebuild that would follow.

Now he will leave in the summer – mark it down – to one of the teams that couldn’t secure his services this week. The only difference being that the Raptors will almost certainly get nothing out of the bargain.

There will be another fan love-in when Lowry goes for realsies, but it won’t feel right. Nobody wants to bury the same body twice. It’ll be a quick hit on a slow news day. Lowry will end up skulking out of town and popping back up in Philadelphia or Los Angeles.

On the one hand, trades are funny things. They don’t work out much more often than they do. It’s no disaster when something that was always theoretical falls apart.

And on the other hand, what the hell’s going on here? Did the battery on the one cellphone the entire Raptors executive shares die at 2:45 p.m. or what?

In most people’s minds, the Raptors had already traded Lowry. Clearly, it was in his mind.

At any point in this, if they felt there was a chance it wouldn’t come together, the Raptors could’ve pumped the brakes on the idea. Make one of those public gestures of faith in the player. They didn’t.

The result is more than an anti-climax. It makes everyone involved look out of the loop. With Toronto’s luck, Lowry will retaliate for this minor slight by becoming Magic Johnson for the next 30 games. That would cost Toronto a lottery pick. It would be the most in-character way for him to go out.

What makes this even weirder is that the Raptors clearly wanted to be rid of Lowry. On Thursday, they shipped out three other players, including this season’s offensive standout, Norman Powell, to the Portland Trail Blazers. The return for Powell was guards Rodney Hood and Gary Trent, Jr., who is a younger, cheaper Powell. Toronto also traded Matt Thomas to Utah and Terrence Davis to Sacramento for future draft picks.

In essence, the Raptors cleared out the roster room to make the Lowry trade, and ended up holding their own bag. Now, they are neither much better nor much worse, which puts them in a standings limbo for the rest of the year.

“I hope I’m pardoned if I valued [Lowry] too much,” club president Masai Ujiri said on Thursday evening. I’m sure he will, but he still did.

The teardown will resume in July. If this isn’t a missed opportunity for Toronto, it is at the very least a job delayed for no particularly good reason.

The impression left is of a franchise that isn’t sure what it wants to do or how it intends to do it.

The Raptors have been that sort of team before. The road to championship glory in Oakland was paved with a bunch of four-tire blowouts in Cleveland and Washington.

Ujiri, they have never seemed aimless as an organization. Not all of Ujiri’s deals have been golden, but they all made sense. You could explain them.

Ujiri always controlled the narrative. If he didn’t want you to know what was going on, you didn’t. That’s how Kawhi Leonard materialized in our midst one day. It’s how Andrea Bargnani got dumped in a sack in front of Madison Square Garden before anyone in the NBA got wind of it.

Poetically, the last Ujiri deal that got this cockeyed was the attempted 2013 trade of Lowry to New York, the trade that was meant to start the great Toronto tank. Let’s remember that that deal was Lowry for Raymond Felton (not good), Metta World Peace (worse) and a 2018 pick (five years later? Why not make it 10?). That trade – one that might have defined the Ujiri era, in a bad way – was called off by Knicks owner James Dolan.

On that basis alone, if you want to rank the greatest executives in Toronto Raptors’ history, they are, in order, Ujiri, Glen Grunwald and Dolan.

It turned out brilliantly in the end, but that was the last time Ujiri got it seriously wrong.

Afterward, he and Lowry fought for years. In fairness, Lowry fought with everyone, all the time. For a while there near the end, former Toronto coach Dwane Casey avoided as best he could saying Lowry’s name out loud.

If you believe the stories, Ujiri and Lowry didn’t truly make it up until midway through the championship season. So for six years or so, the guy in charge of the Raptors and his most influential star were at each other’s throats. That makes where they ended up even more remarkable.

If Lowry was a pain to manage, he proved himself worth the trouble many times over. He isn’t the greatest Raptor ever – that’s Leonard because, I dunno, he won a championship essentially by himself.

But Lowry is the most iconic player in franchise history. He was embued with the most stereotype Canadian qualities – played for the W, liked a scrap, had an enormous supply of little-man anger and a sly sense of humour. He was the guy who stayed when he could have left. Up here, that means something.

Lowry didn’t deserve better on Thursday. Nobody who makes US$30-million requires additional privileges. But it could’ve been a lot tidier.

In the end, you are left wondering if Ujiri’s head and/or heart is still in this. Has he already started thinking about what happens when his contract expires July 1? Is he already elsewhere in his mind?

Asked directly if he’s re-signing, Ujiri said: “We’ll visit this at the end of the season at some point.”

Well, that sure sounds hopeful.

For all his charisma, the thing that sets Ujiri apart as an executive is the ruthlessness of his intelligence. Finding a reason to hang on to Lowry seems like nostalgia or pride or both. It certainly didn’t make his squad any better long-term, or next summer’s decisions any easier, or the organization look like it has its house in order. 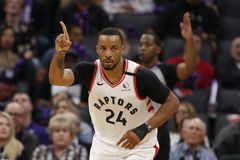 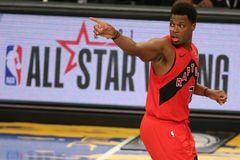 Raptors finally snap nine-game losing skid in what might have been Lowry’s finale
March 25, 2021 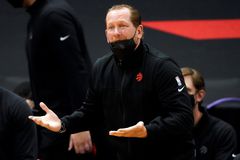