General manager Scott Perry will take over control of the basketball operations, with the team announcing that it would begin an immediate search for a new president.

Mills has held a number of titles at Madison Square Garden since 1999, where he came after spending 16 years at the NBA. But this was the first time his role included full control of basketball decisions, and now MSG executive chairman James Dolan will look for someone else to do it.

“I will always be grateful to Jim for giving me the chance to represent this franchise and I’m disappointed we were unable to achieve success for New York,” Mills said. “I would like to thank the staff and the players for their hard work during my tenure. I will always be a Knicks fan.”

Mills’s firing is the second major change for the Knicks this season. They fired coach David Fizdale after just 22 games.

The Knicks are 15-36 this season. They were 17-65 last season, tying the worst record in franchise history, but believed a big summer could lead to a quick improvement.

However, they couldn’t sign any of the top free agents despite having enough money to afford two of them, watching as Kevin Durant and Kyrie Irving instead went to Brooklyn. Mills then pivoted to sign veteran players to short-term contracts, later insisting those were the players New York was targeting all along.

But instead the Knicks are headed for a seventh consecutive season with a losing record and no playoff appearance.

Now it will be up to Perry to decide if there are any moves worth making for the Knicks before Thursday. Their big trade from last season appears to be a failure: Kristaps Porzingis has helped spark a turnaround in Dallas after New York traded its former all-star there on Jan. 31, 2019.

Mills was the Knicks’ GM from 2013-17 before being elevated to president after Jackson’s departure. He hired Perry and Fizdale, touting a new culture and a plan to rebuild the franchise through youth instead of seeking quick fixes.

But there haven’t been any fixes at all.

Pressure shifted onto Mills after Fizdale was fired following a 4-18 start to his second season. The Knicks have played better under interim coach Mike Miller and won their past two games, but the organization remains one of the league’s laughingstocks.

New York was blown out at home by Memphis last Wednesday in its most recent home game, when point guard Elfrid Payton was suspended and forward Marcus Morris fined for their roles in an altercation late in the game. Fans chanted “Sell the team! Sell the team!” with Dolan sitting in his courtside seat.

Dolan decided on a different change.

He already has cycled though former players and coaches such as Isiah Thomas and Jackson, but little can stop the losing that has been a constant during his ownership. There was immediate speculation that the next big name that would draw his interest was Masai Ujiri, who built Toronto’s NBA championship team.

The Knicks said it was anticipated that Mills would be nominated to the board of MSG’s standalone sports company.

“Steve and I have come to the decision that it would be best for him to leave his role as president of the New York Knicks,” Dolan said. “We thank Steve for his many years of service to our organization and look forward to continuing our relationship with him as part of our board.” 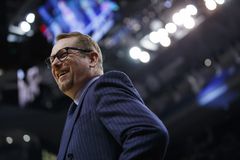 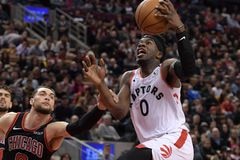