On some level, Pascal Siakam must’ve understood that telling everyone he didn’t feel like “the guy” in Toronto – his words – would confuse people.

“I had the contract, but I never felt like I was the guy, to be honest,” Siakam said in a New York Times Q&A a couple of weeks ago.

This kind of thing is never a great idea. After a season in which your team went off a performance cliff and you went with it, it’s an actively bad idea. Considering that season was the first of your US$137-million supermax extension, it’s a shockingly bad idea.

Clearly, Siakam wanted to get out ahead of the problem. He did that making a short film and posting it to his YouTube channel. Like any normal person would.

In that video, released last week, Siakam excitedly returns to Toronto. You know he’s excited because he says the word “excited” about a hundred times.

He does normal Toronto things. He drops in at the office. He goes to a park. He rides the streetcar.

“Oh, you gotta pay for this?” Siakam says, staring at a ticket dispenser. “For real?”

Suffice to say that the average pro athlete’s experience of life is not quite the same as the rest of us.

The Raptors held their annual media day on Monday. For the better part of a decade, it’s been an event – either because the team was getting a lot better or because it was on the edge of implosion. Fun either way.

This year’s was shaping up as a drag. The club is not good. It will not be good for the foreseeable future, but nor are the Raptors bad. They’re just kind of there, stuck in the muddy middle of the league you least want to be trapped in.

What can you say about that sort of team?

My God, you should see my arms. Goosebumps. Make sure the people paying two grand for courtside seats know that everyone’s going to try.

So Siakam is owed a debt of thanks. At least he’s being interesting. From this small corner of the fourth estate, I want you to know that no matter what your stats say, you are still the guy in my heart.

Fred VanVleet was the first of the players to speak. That was transparently so that he could offer a thoughtful defence of Siakam before Siakam could screw that up.

Asked about “the guy” comments, VanVleet spoke for nearly three minutes. The upshot to his comments: That Siakam, for reasons that are obscure to people who do not play pro basketball, felt overshadowed by Kyle Lowry, and that that was neither Lowry’s fault, nor Siakam’s.

I’ll give him this much – it’s a great attempt at fixing his teammate’s blunder. Ten out of 10 for effort and sophistry, but only a three for logic.

VanVleet sidestepped the main problem here, which is not that Siakam felt diminished by Lowry’s mere existence. People feel how they feel, including very rich and famous people.

The problem is that Siakam went out in public and moaned about it.

I’m not sure which would be the most alarming from the Raptors’ perspective – that Siakam knew how saying that sort of thing in the New York Times was going to go over; or that he didn’t. Either way, it’s a bad omen for the future.

The “I [heart] Toronto” YouTube video was the first attempt at fixing things. Early in it, Siakam is shown in the parking lot under the OVO practice arena assessing the quality of parking spaces.

Would you like to guess whose parking spot he’s pointing at?

So let’s call the video only a moderate success at getting past the “the guy” incident.

VanVleet was Attempt No. 2.

If the goal was assuring people that Siakam hasn’t alienated his teammates, mission accomplished. If it was convincing us that Siakam is the Raptors’ main man, it was a flop.

With his candour, his easy charm, his genuine attempts at giving a straight answer to a straight question, it’s clear what VanVleet is to the Raptors – he’s the guy.

I wonder if Siakam understands that. The medium-term success of the Raptors depends on him accepting the fact.

In a best-case scenario for Toronto, Siakam will be the most important Raptor on the court most nights. The NBA prizes versatile big men with smooth hands who can get to the basket and VanVleet can’t will himself to be six inches taller.

But everywhere off the floor, including on the bench, VanVleet is in charge.

As soon as Lowry left, he became the face of the franchise. When there’s talking to be done, he will be the one doing it. When people think of the Raptors in years to come, VanVleet’s name will spring to their lips.

Siakam came out after VanVleet hoping to smile and bluster his way through the problem. He said “excited” and “amazing” a bunch of times.

On the subject of Lowry, in a rambling reply: “For me, it was just kind of understanding where I stand, and where my position was. Now I think that, obviously, with Kyle gone, there’s no question.”

I suppose that depends on how much work that “obviously” is doing. If Siakam thinks he has become The Raptor, in the way Lowry, or DeMar DeRozan, or Kawhi Leonard were all The Raptor, then that would be wrong.

Siakam is a Raptor, an important one, but as soon as he started complaining about being insufficiently petted, he took himself out of the running for a job as “the guy.”

If that’s okay with him, then no problem. If this really was all about Lowry, then it’s in the rear-view mirror. But if this is about forcing the organization to constantly make him feel special, then this will be the Raptors story that keeps on giving.

Many Raptors getting first taste of home as training camp opens in Toronto
September 27, 2021 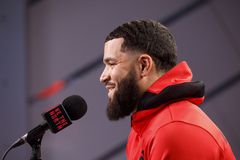 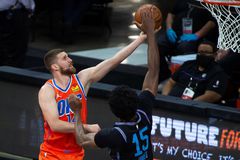