Rob Maaddi
Philadelphia
The Associated Press
Published May 26, 2021 Updated May 28, 2021
For Subscribers
Comments
Text Size
Please log in to listen to this story. Also available in French and Mandarin. Log In Create Free Account

Ben Simmons put a spin move on Russell Westbrook that sent him sprawling to the floor several minutes before a leg injury sent the NBA’s triple-double king to the locker room.

With Simmons soaring and Westbrook ailing, the Philadelphia 76ers beat the Washington Wizards 120-95 on Wednesday night to take a 2-0 lead in their first-round playoff series.

Game 3 is Saturday night at Washington.

Westbrook went down after colliding with Furkan Korkmaz early in the fourth quarter. He limped off the floor and was restrained by security after a fan threw popcorn at him as he was headed under the tunnel.

Simmons and Joel Embiid each scored 22 points and Tobias Harris added 19 for the top-seeded Sixers. Simmons added nine rebounds and eight assists after becoming just the sixth player in NBA history to have at least 15 rebounds and 15 assists in a playoff game in a 125-118 win in Game 1

The three-time all-star still heard plenty of criticism in Philadelphia after that stellar performance because he only scored six points and missed all six of his free throws.

Simmons was aggressive from the start, scoring the team’s first two baskets on his way to 12 points in the first quarter, including three dunks.

Bradley Beal had 33 points and Westbrook finished with 10 points and 11 assists for sub-.500 Washington.

Embiid scored on a driving layup, got knocked to the floor and sank a free throw to complete a three-point play in the final minute of the second quarter. Dwight Howard led the crowd’s chants of “M-V-P! M-V-P!” for Embiid, who raised both hands and soaked in the adoration.

The Sixers withstood 24 first-half points from Beal in the first half and led 71-57 at halftime. They maintained a double-digit lead throughout the second half.

Pat Croce, who was team president when the Sixers reached the 2001 NBA Finals, fired up the fans when he rang the ceremonial bell to start the game. ... They’re 28-5 with Simmons, Embiid, Harris, Seth Curry and Danny Green in the starting lineup.

Derrick Rose scored 26 points, Julius Randle shook off a miserable first half to lead a third-quarter turnaround and the New York Knicks beat the Atlanta Hawks 101-92 on Wednesday night in Game 2 to tie the series.

Game 3 is Friday night in Atlanta, where the Hawks will be allowed to welcome a full capacity crowd for the first time

Randle was 0 for 6 with just two points at halftime and the Knicks were staring at a 13-point deficit. But with Rose moving into the starting lineup to open the third quarter, Randle scored 11 points on 4-for-5 shooting in the period as the Knicks took the lead.

The winner of the NBA’s Most Improved Player award finished with 15 points and 12 rebounds despite another poor shooting night. He was 5 for 16 after going 6 for 23 in the opener.

But he came through with it counted along with Reggie Bullock, who made four 3-pointers in the second half and also had 15 points as the Knicks guaranteed there will be at least one more home game in this surprising season.

Trae Young scored 30 points for Atlanta after having 32 and hitting the tiebreaking shot in Game 1. Bogdan Bogdanovic and De’Andre Hunter added 18 apiece.

Donovan Mitchell scored 25 points in his much-anticipated return from a sprained ankle and the Utah Jazz overcame Ja Morant’s franchise-record 47 points in a 141-129 victory over the Memphis Grizzlies on Wednesday night, tying the first-round playoff series at a game apiece.

Mitchell, who was limited to 26 minutes, made five 3-pointers. Rudy Gobert had 21 points, 13 rebounds and four blocks for the Jazz.

Mike Conley had 20 points and a career-best 15 assists, and Bojan Bogdanovic added 18 points to help the Jazz knot the series.

Morant broke Conley’s Memphis playoff scoring record, and became the first player to score as many as 71 points in his first two career playoff games since the NBL merged with the BAA to create the NBA before the 1949-50 season.

Two Gobert dunks off pick-and-rolls powered a 10-0 run that bridged the third and fourth quarters and gave the Jazz a 110-97 lead following a three-point play by Mitchell.

Dillon Brooks, who scored 23 points, had a dunk that got the Grizzlies within 121-112 with 7:06 to play, but Memphis couldn’t stop Utah’s multifaceted attack, which scored at least 36 points in three of the four periods. 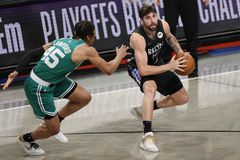 Warriors forward Andrew Wiggins ready to suit up for Canada at Olympic qualifier
May 25, 2021 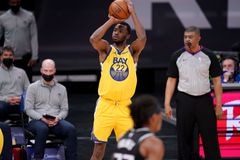 Nuggets beat Blazers to even series as Bucks roll past Heat
Subscriber content
May 25, 2021 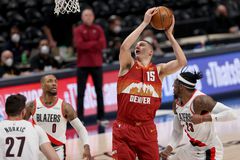