What the Toronto Raptors did to the Brooklyn Nets on Monday was not garden-variety domination. This was something crueller.

The Raptors toyed with the Nets, getting them off their feet and down on the ground at the first bell. This wasn’t punching-bag stuff. This was like watching a guy work a speed bag. At one point, Toronto was up by 33 points.

When it got near the break, the Raptors laid off for a bit. They splashed some water on Brooklyn’s face. Lit them a cigarette. The Nets briefly regained consciousness.

Then when it got “close” Toronto resumed the pummelling. It finished 134-110.

The Raptors are here on their defensive reputation, and they have just posted a franchise-record for points scored in a playoff game.

By the end, the Nets had to make an emergency transition to their “B” team (which is every other playoff qualifier’s “C” team). It had suddenly dawned on the Brooklyn players that they will face this punishment again on Wednesday afternoon.

After it was over, the Raptors dealt the cruellest blow of all – they were nice about it.

“Those guys, the Nets, they played extremely hard. That was a battle,” Kyle Lowry said.

A battle? There have been more even-sided sneak attacks. If that’s a battle, I’d hate to be the guy who has to clean up after a romp.

“I knew they were capable,” head coach Nick Nurse said. “It didn’t totally surprise me they got going for a stretch.”

Maybe Brooklyn can use quotes like that as motivation. To give up. This may be the first seven-game series in NBA history that lasts three games.

This is not exactly Brooklyn’s fault. It is a young, inexperienced team and all of its best players decided to turn an injury season off into a COVID-19 year off. Functionally, the Raptors are playing a G-League team.

But this much separation in terms of quality is not playoff basketball. It’s mercy-rule basketball.

What occurred to you in watching this is that, for the first time ever, this year’s Raptors are not just good. They are imperious. They lord it over other people.

The Kawhi-era Raptors were not that sort of club. They were resilient, but they didn’t dominate anyone. They dumped their first game of the 2019 postseason campaign to Orlando. Then they let Philadelphia beat them up. They lost the first two to Milwaukee. And they closed it out with a slapping contest against Golden State that would most likely have ended differently if Kevin Durant and Klay Thompson hadn’t both blown a tire.

That championship was a victory of the will. That doesn’t lessen it in the least. Rather, it ennobles it.

But there was no point during that run when you thought, “These guys have it in the bag.”

This year’s first game presages a very different sort of team. One that enjoys mind games. One that doesn’t care that you haven’t been here before and that that’s a little scary for you. They are going to biff you around like a red-headed stepchild until you have the good sense to run away. This Raptors team – easily the most likeable in recent history – is also the meanest.

Going into this, the Nets appeared to genuinely believe they had a puncher’s chance. They have been a lot of fun to watch in the bubble. Guard Caris LeVert had become something of a discovery.

When teams backed up in front of them, the fresh-legged Nets had fun running at them. But the seeding games aren’t the postseason. Nobody’s backing up any more.

“We know they’re the defending champs,” LeVert said a day ago. “But we’re going in there knowing that we like our chances against anybody, really.”

That second sentence now makes more sense if you change the punctuation from a period to three or four consecutive question marks. Because, really???

This is where you say something like, “It’s too soon to look ahead to …”

It’s not too soon. The Raptors should assign every coach but Nurse to scout the Philadelphia/Boston series. They don’t need them here.

This in the end may be the only drawback for the Raptors. That 3 vs. 6 Eastern Conference headliner could turn into a seven-game war. Which may very well leave the Raptors cooling their heels for most of a week. It might be in their interest to lay down for a game to Brooklyn, and draw out this torture for a while.

But it is clear this Toronto team is in a hellacious groove. There were some concerns coming in that offensive focal point Pascal Siakam had not rediscovered regular regular-season form. On Monday, he scored 18 points and was dive-bombing the rim like a spitfire. He’s fine.

Fred VanVleet is technically the other point guard. He scored 30 on 8-for-10 three-point shooting. At a certain point, in order to keep himself interested, Lowry appeared to devote himself entirely to drawing charges. The man, who never looks like he’s having fun out there, was very clearly having fun out there.

Man by man, the Raptors looked preposterously strong, while also breezy and at ease. It’s a rare combo.

The doubts about them will continue until they have eliminated a team of estimation. Giving the Nets a two-and-a-half-hour noogie for four days in a row isn’t going to change any minds. Nor you would imagine is beating either of Boston or Philadelphia.

The Raptors will not have a true reckoning until they meet Milwaukee. That’s a month from now. That’s a long time to stay mean. That’s going to be the real challenge.

Is talking this way tempting fate? Sure, it is. But some teams can do that and get away with it. It’s only one game, but however long you have been watching the Raptors, you have never seen them come out of the gate looking more like that sort of team. 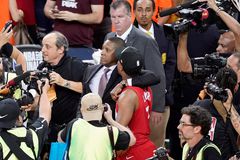 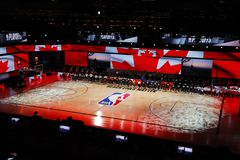 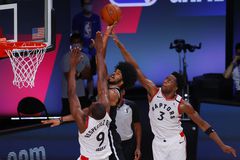