The Oklahoma City Thunder came to Toronto Friday night and got even for the loss they suffered at the hands of the Raptors two nights earlier.

Paul George scored 28 points, while Dennis Schroder added 26, as the Thunder avenged Wednesday’s overtime loss in Oklahoma City by upending the Raptors in front of their home crowd, 116-109. Russell Westbrook rolled for a triple double —18 points, 12 rebounds and 13 assists.

Kawhi Leonard had 37 points for the Raps — 20 of them in the fourth quarter — as he tried to spearhead Toronto’s late comeback attempt.

Pascal Siakam had 25 points, and Danny Green had 19, including six three-pointers.

The Raptors were ultimately undone by turnovers – a whopping 22 of them – that lead to 20 OKC points. Leonard was responsible for eight of them, while Siakam had seven.

It was also tough to overcome the astonishing 20 three-pointers the Thunder hit. Compare that to 13 for the Raps.

It was a rematch of their battle on Wednesday when the Raps escaped Oklahoma City with a 123-114 overtime victory after coughing up a huge lead earlier in the night. They had outscored OKC 13-4 in extra time.

Kyle Lowry was sidelined for a second successive game on Friday night. He injured his right ankle in Monday’s game against the Knicks, which was his first game back after missing two while recovering from a left ankle injury.

Raptors coach Nick Nurse said Lowry is “in pretty good shape” and the team expects Lowry to return some time next week, or when the soreness subsides. The coach said he’s eager to get a look at his team at full strength, with just nine games left in the regular season.

“Could we be the No. 1 seed in the league? Probably, without all the injuries. But we’ve had a ton of them. I think we’ve had four or five guys miss 20-plus games,” Nurse said. “As long as we get them back when we need them, have our team at full strength, or as full strength as we get it, good. And if for some reason we don’t? Man, we’ve played enough games without it full strength, so we oughta be able to go then, too.”

Toronto played to a 10-point lead by halftime. Westbrook – who had 42 points and 11 rebounds against the Raps earlier in the week – was held to just seven points by the half on 3-of-10 shooting.

Even with all-stars such as Westbrook, George and Leonard in the game, it was Siakam doing the most dazzling. Fresh off a 33-point, 13-rebound performance Wednesday, Siakam had some all-star-like moments on his own in this one. He made a lightning-quick interception of a pass between George and Westbrook, and then eluded Schroder with long strokes to make good on a craft layup. At one point, when Westbrook appeared to cleanly defend Siakam, it was the OKC star who ended up with the foul.

Yet despite holding a lead as big as 13 points, the Raps let the Thunder get back into the game with one sloppy quarter – just as they had two nights earlier in OKC. It was as though Westbrook finally got fed up.

Oklahoma City, which snapped a four-game losing streak, outscored Toronto 35-22 in the third quarter, largely off a scoring burst from the enigmatic OKC standout.

The Thunder took an 83-80 lead into the final quarter. The visitors seemed to keep momentum as Serge Ibaka was slapped with a flagrant foul for appearing to slide a foot under Schroder while he was airborne in mid-shot. Minutes later, Ibaka blocked Schroder’s shot and celebrated a little, so Schroder stuffed the ball into his chest and was slapped with a technical of his own.

Halfway through the fourth, it was the Thunder who held a 10-point lead.

Leonard was big in the final quarter, but it wasn’t enough.

Fred VanVleet, who started in place of Lowry, had eight points and five assists. Marc Gasol, despite creating on offense and playing well defensively, had just two points on a single field goal attempt.

The Thunders’ volume from beyond the arc was tough. They hit 20 of a stunning 43 attempts from deep. George hit five of them, but the secondary players were big too.

“[Jerami] Grant hit five. [Terrance] Ferguson three and I think Schroeder hit four. The game plan was to make them shoot contested ones,” said Green. “But to get 36 points off threes from them guys is a game changer.”

The Raps fell to 51-22, still second in the Eastern Conference standings. The Thunder – sitting in the middle of the playoff pack in the Western Conference – improved to a 43-30 record.

The Raptors have nine games left in the regular season. The next is Sunday night at home against the Charlotte Hornets.

Raptors will be without injured guard Kyle Lowry for Thunder rematch
March 21, 2019 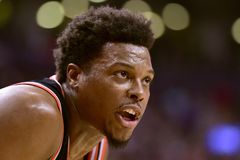