Danny Ferry thinks Luol Deng "has a little African in him."

Ferry is the general manager of the Atlanta Hawks. Luol is an NBA star.

That was one of the things Ferry said about Luol when he was assessing him as a potential recruit during a conference call with his ownership. As you may have heard, those words have caused a lot of hurt and anger.

When I first heard it, I wondered, "What does that mean?" I am an African from Nigeria. Luol is an African from South Sudan. We've worked together across our home continent, holding our own basketball camps, as well as in those organized by the NBA.

I remember an instance, in Kigali, Rwanda, when Luol honoured a commitment to show up despite being seriously ill. He didn't want to disappoint any of the children who were expecting him.

Is that "a little bit of African"?

His fellow NBA players have named him the NBA's top sportsman. Last year, his work for charity earned him the league's J. Walter Kennedy Citizenship award.

Is that the "African" he means?

Luol has made two all-star teams. A couple of years ago, he had a terrible reaction to a spinal tap. He lost 15 pounds in the hospital. I was texting with him during that ordeal, which was very serious. He always remained humble and full of personality. When he got out, he still tried to play for his team during a playoff series.

I've known Danny Ferry for a few years; first, when I worked as an NBA scout, and then as a fellow GM.

I've always thought he carries himself well. He's tough. I respect that.

We did a trade together in June, one that brought Lou Williams and Lucas Nogueira to the Raptors. Danny was straightforward in what he wanted, and pushy when he wanted to make the trade happen. That's the way it should be.

So when I heard what he'd said, I was taken aback.

I reached out to a couple of people who know Danny well. Both have been great mentors for me.

R.C. Buford is the GM of the San Antonio Spurs. He was one of the first NBA executives to come to our Basketball Without Borders camps a decade ago. That same year, he adopted a young man from Cameroon. Wayne Embry is an adviser for our team. Forty years ago, he was the first African-American GM of an NBA team.

Both of these men, whom I trust so much, are close to Danny. They have nothing but great things to say about him. The league is a small world. Other people I've spoken to who know Danny well say that he has never done anything they've seen to suggest he holds racist views.

I spoke to Danny myself about this. He started off by apologizing to Luol. He apologized to me and apologized for any insult he'd offered to African people in general. He explained the incident as best he could to me. There are some things about that conversation I would like to keep between the two of us, but I came away feeling like I'd understood what he had to say.

Here is what I have to say:

I have no idea what is happening in the Atlanta Hawks organization, but I do know how the scouting world works. We all have different ways of sharing information about players and different vocabularies to do so. It crossed a line here.

That said, we are all human. We are all vulnerable. We all make mistakes.

You discover a person's true character in their ability to learn from and then move on from those mistakes. One of the truly important things we must learn is how to forgive.

Danny's mistake will remain tied to him for a long time. What he's said can't be unsaid, but we must measure his heart. If he has made an honest, isolated error, we should forgive and move on.

I spoke to Luol on Thursday morning. The first thing he said to me was, "We have to figure out a way to make sure this doesn't hurt other African players."

Young players from Africa are renowned around the basketball world for their work ethic and their decency. Luol isn't worried about himself. He's worried about making sure the opportunities he and I were given are still available to the next generation of Africans. He's also worried that some of the noxious stereotypes that have been raised in connection with this sad incident do not take hold in people's minds. That shows you the sort of man he is.

Luol will move on from this and continue in his work, of which professional basketball is only one part. I hope to see him soon back home in Africa, where we will work with the many young people who understand that to have a little bit of African in them is to have the pride of a continent inside you.

My hope is that we will soon see Danny Ferry at a Basketball Without Borders camp as well, so that he may come to know us.

Because when we know better, we do better.

Masai Ujiri is president and general manager of the Toronto Raptors.

Masai Ujiri is president and general manager of the Toronto Raptors. 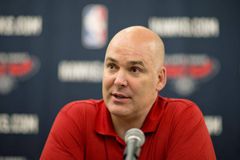