Patrick Patterson saw the Raptors bring back guards Kyle Lowry and Greivis Vasquez and coach Dwane Casey, and he wanted to stay along for the ride.

So the 6-foot-9 forward re-signed with the Raptors for a reported $18-million (U.S.) over three years in the hopes that this past season's playoff run was just the start of something good in Toronto.

"I was happy at the end of the day we were able to come to great terms – more thrilled that everyone's coming back from last year, pretty much," Patterson said Monday. "[We] still have that core group of guys that we can build on and have another successful year."

The Raptors' turnaround began in December when they acquired Patterson, Vasquez, John Salmons and Chuck Hayes from the Sacramento Kings for Rudy Gay, Aaron Gray and Quincy Acy. They went 41-22 the rest of the season, winning the Atlantic Division before losing in seven games to the Brooklyn Nets in the first round of the playoffs.

Along the way, Patterson averaged 9.1 points and 5.1 rebounds a game as an integral part of Toronto's bench. In a statement announcing the deal over the weekend, general manag er Masai Ujiri said the Raptors were "very pleased with what Patrick brought to us both on the court and in the locker-room last season."

The feeling was mutual, so the 25-year-old restricted free agent felt little uncertainty about returning. Patterson sees the Raptors' continuity amid a changing NBA landscape as a major positive.

"I look it as a way that we're building," he said. "We have something special here, we have something positive. We have a great coaching staff, great organization, great leadership, great players and we have guys who are hungry and willing to learn and get better every single day. I'm glad that we're all staying together, and with the success that we had last year, hopefully we can build on that and have an even better year."

It starts with star point guard Lowry, who signed a $48-million, four-year deal last week after averaging over 20 points a game in almost getting the Raptors past the Nets and into the second round. His re-signing with the Raptors was a clear message to teammates about the direction of the franchise.

Patterson wants to be a part of it, too, thanks in large part to Casey, a fellow University of Kentucky alum who got a three-year contract extension. Patterson called Casey "one of the key reasons" the Raptors managed to make the playoffs.

"Every single day he brought it, and whenever you have a coach who brings it just as hard as anybody else on the team and who's just as dedicated, if not more, success is bound to happen," he said.

Lowry, Patterson and company are betting on more success in Toronto, especially as the playoff appearance raised expectations.

While the core is intact, Ujiri hasn't maintained status quo completely. He brought back forward James Johnson and acquired Lou Williams and Diante Garrett in trades.

In the process, the Raptors' bench got deeper.

"We have some key and some great additions to this team that's going to make us better and a tough team to handle," Patterson said.

Of course the Eastern Conference hasn't gotten any easier. LeBron James went home to the Cleveland Cavaliers, Chris Bosh re-signed with the Miami Heat and the New York Knicks have Carmelo Anthony back to go along with new president Phil Jackson and new coach Derek Fisher.

All that movement only upped the ante on the Raptors, who need to make their own strides forward. Patterson said the goal is to win more games than the 48 they got last season.

Newly re-signed Lowry eager to ‘do something special’
July 10, 2014 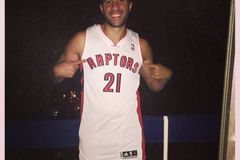 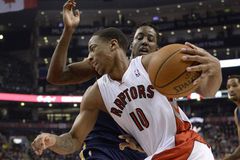 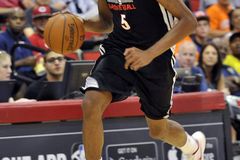