The Toronto Raptors seem to be radiating positive vibes, from the franchise-record 10-game win streak, to their freshly named pair of all-stars, and the light-and-lively tone of their post-practice interviews.

Kyle Lowry and DeMar DeRozan are the highest-scoring backcourt in the NBA's Eastern Conference. Their all-star nods, their friendship and their constant comedic displays of affection for one another have been spotlighted nightly, as they lead the Raptors in points game after game.

While Toronto's dynamic duo have been exceptional during this victory streak, there have been other factors contributing to those victories, too. Look to the Raptors' second unit, which is changing the tone of games. Look to the big improvement in Terrence Ross. Finally, don't discount the hard luck experienced by many of Toronto's opponents.

When assistant coach Rex Kalamian joined Toronto's staff this year after six seasons with the Oklahoma City Thunder, he quickly took notice of a player he had never really noticed before: Ross.

A starting guard for Toronto the past two seasons, Ross returned to the bench this year. He had yet to consistently build upon the flashes of athleticism and scoring prowess shown in one 51-point game two years ago. Lately, he's standing out.

"I told him, 'I never realized what a good player you are' since I only saw him twice a year when I was in the west," Kalamian said. "I said, 'You're a really good basketball player, do you realize that?' He had to realize that."

Ross has been spending a lot of extra time in the gym working on his shot. Kalamian and another Raptors assistant, Nick Nurse, have been working with him intensively. Kalamian has had him practising his shot at game speed, and issued him a challenge of having at least two exceptional defensive plays every game. If he doesn't see the two plays from Ross, Kalamian hounds him about it when he comes out of the game.

"He gets his hands on a lot of basketballs," said Kalamian, who plans to keep increasing the number of big defensive plays. "He deflects a lot of balls, plays with high hands, has quick steals. He had four steals against the Clippers."

Ross is averaging 8.7 points a game this season, but had more than 12 points a night in six of the 10 games in this streak. He's had six steals over the past three games and is instrumental on defence.

"His energy level has always been there defensively, but the thing missing was his shooting, and now his shot is going in," head coach Dwane Casey said. "At some point, you've got to decide, 'What am I not doing right?' More players should take that to heed if their shot is not going in; they need to work at a game-speed clip."

Casey includes Ross in a group of bench players who have "changed the tone" of recent games.

Ross hit just two of his nine shot attempts in Thursday's win over the New York Knicks, but he played such effective defence that his plus-minus was a plus-23. Casey has been thrilled with the plus-minus stats for reserves lately – such as Patrick Patterson's plus-21 Thursday and Bismack Biyombo's plus-12.

"We don't win without those guys changing the mojo and the energy level – Pat, Biz, T-Ross, Cory [Joseph] – they're huge," Casey said. "They might not score, but they're pluses. A lot is getting done on the defensive end."

Those overexcited about the streak ought to consider that – while impressive – only three of those victories came against teams in playoff position. They should also take note of the lengthy list of stars the Raptors did not have to face during that time. The Knicks were without Carmelo Anthony, Kristaps Porzingis and Jose Calderon. The Wizards didn't play Bradley Beal. The Clippers were sans Blake Griffin. Dwyane Wade played through a shoulder injury for a Heat squad missing Luol Deng and Hassan Whiteside.

The seven-game homestand concludes Saturday night with a visit from the Detroit Pistons. Then, the Raptors will head west for three games, not to be seen back at Air Canada Centre until after the all-star game. 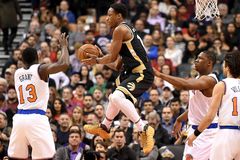 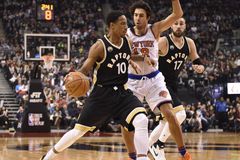 Raptors ‘having fun’ in pursuit of franchise-record winning streak
January 27, 2016 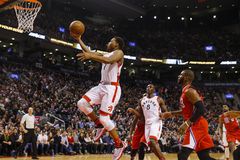