Masai Ujiri vowed there will be a Canadian on the Raptors during his tenure in Toronto, and said he plans to hire a scout to focus on Canadian talent.

He also hinted strongly that the player he most covets is rookie sensation Andrew Wiggins.

The Raptors president and GM was the keynote speaker at Monday night's Canadian Basketball Speakers Forum to kick off the Canadian university men's championships.

Ujiri addressed everything from the growth of the game in Canada to the Raptors' recent slump, and even the F-bomb that he famously dropped during last year's playoff run against the Brooklyn Nets.

When asked if there was anything he'd done that he'd like to take back, Ujiri joked about his "F-Brooklyn" outburst, saying: "Trust me, I ain't taking that back. I hope we play (the Nets) again, and I'll say it again."

The comment prompted cheers from the crowd at Ryerson University's Mattamy Athletic Centre, host of the CIS Final 8 tournament.

It was a feel-good night for Canadian basketball, as Ujiri, legendary NCAA coach George Raveling – now the director of international basketball for Nike – and former Raptors GM Glen Grunwald and his Vancouver Grizzlies counterpart Stu Jackson, among others, gathered to talk about the game, and just how far it has come in Canada.

Ujiri said having a Canadian on the Raptors is "an obligation we have to fulfil. We're a Canadian team and I think to have Canadian players I think would be phenomenal.

"There is no doubt in my mind. . .during my time, even if my time is short, there will be a Canadian playing for the Toronto Raptors, 100 per cent. I have no doubt in my mind, it's something we think about every day, it's something we study. . . the guys in the NBA, the ones outside the NBA, the younger kids, the kids in college, the kids playing overseas. We're just waiting for that one to come."

Ujiri said he planned to hire a scout to concentrate on Canadian players "because the growth of the game here is so big."

When asked if there was one player he'd love to see in Toronto – and taking LeBron James off the table – Ujiri left little doubt that it's Wiggins, the budding superstar from Vaughan, Ont.

"We all know who he is, I'm not even going to say his name," Ujiri said – more cheers from the crowd.

In case there was any doubt, he added: "He might be Canadian."

Jackson said it's no coincidence that the average age of the 12 Canadians who play in the NBA is early-20. It coincides, he pointed out, with the birth of the Raptors in Toronto, and Grizzlies in Vancouver, the teams that kids like Wiggins grew up watching.

Canada Basketball boss Wayne Parrish referenced research that shows hockey participation is on the decline while basketball is on the rise. He can see a time – and called it "a watershed moment" for the sport – when national team coach Jay Triano will be forced to cut an NBA player, because of the sheer depth of the squad.

Ujiri took the stage with Canadian John Saunders, who works for ESPN and ABC. Saunders opened the forum by joking "Times have changed. I remember when a basketball forum in Toronto meant me and Leo Rautins and a couple beers at Gretzky's (bar)."

The CIS tournament at Ryerson marks the first time the tournament has been held in Toronto in its 51-year history. Ujiri said it reflects the game's growth in the city. The Mattamy Athletic Centre will also be the basketball venue for this summer's Pan American Games.

"In every sense it's grown, the prominence of the young kids and the growth of the youth is everywhere, you see it," Ujiri said.

"Basketball in Canada really really intrigues me and I tell you what, there's a bright future, I know that," he added. "I'll just put it this way: hopefully Canadian basketball players aspire to play for the Raptors." 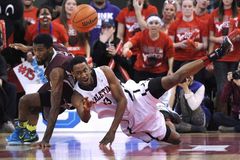