Dane Evans hit Banks on a 23-yard scoring strike with 1:02 remaining to rally Hamilton to a thrilling 35-34 home win over the B.C. Lions on Saturday night. The TD capped an impressive fourth-quarter comeback for the East Division-leading Ticats (6-2), who earned their fifth straight home victory.

Hamilton improved to 20-11 with Banks in the lineup since he became a starter in 2017. By comparison, the Ticats are 0-6 when the five-foot-seven, 150-pound Banks – affectionately dubbed Speedy B – isn’t on the roster.

“He’s one of the best receivers in the league, if not the best,” said Evans, who finished 23-of-32 passing for 260 yards and two TDs in his first win as a CFL starter. “As you saw (Saturday), he’s clutch too.

“When we need plays he’s there and I think the thing that helps him the most is we have other playmakers, too. They can’t just double him. If they do, we’ll just feed it to somebody else.”

Banks, who missed Hamilton’s loss last week in Regina due to a foot injury, finished with nine catches for 137 yards and two touchdowns. He also had a two-point convert.

“That’s just how the numbers are working right now,” said a modest Banks. “Obviously I bring a different element to the game, more of a big-play threat … but we’re a team.

“If you want to be recognized as one of the best teams in the league, you have to pull games like that out to show that you are a disciplined team. Obviously we weren’t as disciplined with all the penalties, but we stuck together and pushed through adversity.

Hamilton was flagged 14 times for 109 yards. B.C. not only held the ball for over 37 minutes but also rolled up 457 offensive yards – including 151 yards rushing. Bryan Burnham registered seven catches for a game-high 149 yards and two TDs while John White ran for 124 yards and two touchdowns on 15 carries.

“We have a lot to work on, but a win is a win,” said Hamilton head coach Orlondo Steinauer. “I think Brandon changes the way people game plan us.

“He’s a threat whether he catches the ball or not. Just having him in there and his presence. Obviously, he had some big catches tonight.”

Still, the Lions made it very interesting on the game’s final play, recovering an onside kick before receiver Duron Carter’s fumble was recovered by Hamilton’s Tyrice Beverette.

Reilly was 21-of-28 passing for 306 yards with two TDs and two interceptions. He also ran six times for 17 yards and a touchdown for B.C. (1-7), which has lost four straight and remains last in the West Division.

“It’s just about details,” said Lions head coach DeVone Claybrooks. “It sounds like a broken record, it’s going to be very repetitive but it’s like sometimes we can’t get out of our way.

“It’s more of us just being able to finish what we started and (what) the guys have got to understand is doing what got us there. We don’t need hero ball at that point, sometimes it’s almost like they’re trying to do too much to be the guy instead of just being a guy that wins the game.”

B.C. seemed to take control in the second half. Reilly’s one-yard TD run at 6:23 of the third quarter culminated a 12-play, 80-yard march that featured six penalties – five against Hamilton.

Then, Reilly found Burnham on a four-yard touchdown pass 14 seconds into the fourth to increase B.C.’s lead to 34-19. That capped an 80-yard, 11-play drive for the Lions, who held the ball for 12 minutes one second in the third.

Frankie Williams, whose 57-yard punt return set up Banks’ winning TD, delivered another huge play for Hamilton. He had a 108-yard kickoff return in the first half, boosting the CFL single-season record to nine.

It was the 18th return score this year, four short of the league mark set in 2004. Last year there were 15 return touchdowns.

Williams appeared to make it 19 when he took Bralon Addison’s lateral 81 yards for the TD on a punt return. But Beverette was flagged for an illegal block, disappointing the Tim Hortons Stadium sellout of 23,308 in the annual Hall of Fame game.

White’s two-yard TD run at 13:24 of the second, and Castillo’s 61-yard single on the ensuing kickoff staked B.C. to a 21-19 halftime advantage. That came after Williams’s kickoff-return touchdown at 9:24. Evans found Tasker on the two-point convert for a 19-13 Hamilton lead.

Hajrullahu’s 10-yard field goal at 4:53 of the second put Hamilton up 11-6. It was set up by Valentin Gnahoua’s recovery of Hajrullahu’s onside kick at the B.C. 30.

Reilly’s 47-yard TD strike to Burnham at 6:23 of the first cut Hamilton’s advantage to 8-6. The two-point convert was unsuccessful.

Hamilton opened the scoring with Evans’ 32-yard TD pass to Banks at 2:01. The two then combined on the two-point convert. 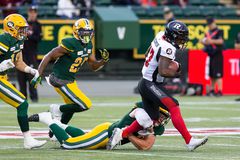 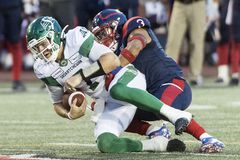 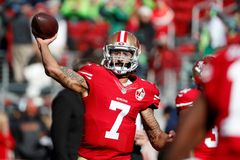