Led by returner Terry Williams and kicker Rene Paredes, the Calgary Stampeders’ special teams were the difference in a 24-18 win over the visiting Edmonton Eskimos on Saturday.

Williams scored on a 103-yard kickoff return and Paredes booted four field goals, including three over 40 yards, as Calgary drew even with the Winnipeg Blue Bombers atop the CFL’s West Division.

The Stampeders and Bombers clash Thursday in Winnipeg in a meeting of 5-2 teams.

Arbuckle improved to 4-1 in starts since Bo Levi Mitchell injured a pectoral muscle in his throwing arm June 29.

The CFL’s Most Outstanding Player in 2018 is targeting an Aug. 17 game against Montreal for his return, so Arbuckle will be under centre again in Winnipeg.

Arbuckle completed 19 of 28 passes for 189 yards and connected with Eric Rogers on a touchdown throw.

Ricky Collins Jr. had a pair of touchdown passes and Sean Whyte contributed a field goal for Edmonton, which dropped to 4-3 alongside the Saskatchewan Roughriders.

Williams’ scored the CFL’s eighth kickoff return touchdown this season, which is a record surpassing the previous high of seven scored in both the 1994 and 2003 seasons.

“I’ve been itching to get into the end zone and contribute to a team win,” said Williams, who scored three touchdowns on punt returns last season, and another 97-yarder in a Grey Cup win.

“I’m glad all 12 guys came together and we made it happen.”

Williams, whose 93-yard punt return to score in the first half was called back because of an illegal block, totalled 190 return yards.

The Stampeders held the Eskimos to just 21 yards on punt returns in front of an announced 26,597 at McMahon Stadium.

Paredes, playing in his 150th career game as a Stampeder, was good on four of five field-goal attempts. He was wide left on an attempted 52-yarder in the fourth quarter.

Trailing by a field goal with one minute 43 seconds to play, the Eskimos started from their own 25-yard line and promptly turned the ball over on downs.

A 27-yard field goal from Paredes put Calgary out front by a touchdown with 40 seconds to play.

Edmonton quarterback Trevor Harris then marched the offence to Calgary’s 18-yard line. His last-second throw to Kevin Elliott in the end zone that would have tied the game was unsuccessful.

“I think any time in the CFL you give yourself a chance to win at the end of the ball game, that’s what you want,” said Edmonton head coach Jason Maas. “We catch that ball at the end, we score, we win.

“I’m proud of our guys for fighting to the end.”

Trevor Harris, who is still looking for a first career win versus Calgary, went 29-for-42 in passing for 373 yards. Edmonton had better time of possession in the game at 31 minutes 26 seconds.

“We just started slow,” Harris said. “Our defence kept us in it. Just a few things here or there, small things, that are preventing us from scoring drives.

“We’ve just got to clean ‘em up, but you can feel the progress. We fought back.”

Mitchell threw the football Friday for the first time since his injury.

“He said it went well. No pain,” Stampeder head coach Dave Dickenson said. “I would expect him to be practising this week. Nick’s doing well, but obviously I’d love to have Bo out there.”

The Eskimos are at home to the Ottawa Redblacks (3-4) on Friday. 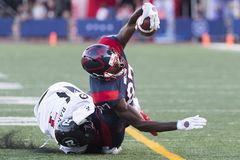 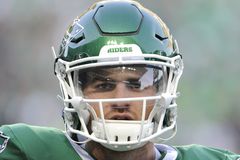