The Montreal Alouettes have signed star running back William Stanback to a two-year contract.

Stanback returns to the Alouettes after getting cut by the NFL’s Las Vegas Raiders in training camp this year.

The 2020 CFL season was cancelled because of the COVID-19 pandemic.

The league hopes to resume play in spring 2021.

“We are extremely happy that William chose to return to Montreal and be a part of the nucleus of our players for the upcoming seasons,” Alouettes general manager Danny Maciocia said in a statement.

“His return will allow us to continue offering our fans exciting and spectacular football, all while bolstering our offence with a good dose of talent and energy.”

O’Day and Dickenson guided the Roughriders to a first-place finish in the West Division in 2019.

“Jeremy has showed tremendous dedication to the Saskatchewan Roughriders and his leadership, especially through the challenges of 2020, has been outstanding,” Roughriders president/CEO Craig Reynolds said in a statement.

Dickenson was named CFL coach of the year last year.

“In his first season as head coach, Craig did an exceptional job leading and supporting our players on and off the field and the results speak for themselves,” O’Day said.

Leonard is still looking to make his Calgary debut after originally signing with the Stamps in February following three seasons with the Hamilton Tiger-Cats.

Leonard started all 18 regular-season games at halfback for the Ticats in 2019, registering 55 tackles and four interceptions, including one returned for a touchdown, en route to being named a CFL all-star.

He also started both the Eastern final and the Grey Cup and recorded nine tackles, including one tackle for loss.

Leonard was an East Division all-star in 2017.

In 49 career games, Leonard has 12 interceptions to go with 178 tackles, including six tackles for loss, one special-teams tackle, three forced fumbles, four fumble recoveries and 31 knockdowns.

He has scored two career touchdowns, including an 84-yard return after the recovery of a blocked field goal in his CFL debut.

Orimolade appeared in 10 regular-season games as well as the Western final and Grey Cup as a rookie in 2018, seeing action both on defence and special teams.

He also had two special-teams tackles and an important fumble recovery in the Stampeders’ 27-16 Grey Cup victory over Ottawa.

The Dartmouth alum suffered a quadriceps injury in the Stamps’ first pre-season contest in 2019 and was sidelined for the rest of the year.

The B.C Lions have re-signed receiver Dominique Rhymes to an extension through 2021. He was eligible to become a free agent in February.

The 27-year-old Rhymes originally signed with the Lions in February following 36 appearances over three seasons with Ottawa.

He didn’t get a chance to suit up for the Lions after the 2020 season was cancelled due to the COVID-19 pandemic.

Rhymes had a career year in the nation’s capital in 2019, hauling in 65 catches for 1,056 yards and five touchdowns.

Alston signed with the NFL’s Miami Dolphins in 2018 and joined the Detroit Lions in 2019 after playing at NC State.

Etta-Tawo starred for Syracuse in 2016, recording 1,482 yards and 14 touchdowns and being named team all-ACC.

Evans is coming off three seasons at the University of Louisiana Monroe, where he recorded 9,520 passing yards, 58 touchdowns and 34 interceptions in 42 career games. He added 2,162 yards and school record 36 TDs on the ground/

Johnson spent the 2019 season in the Seattle Seahawks’ organization. Prior to going pro, he had 214 tackles and five sacks through three seasons at Northern Illinois and one at Texas Christian University.

The Toronto Argonauts have extended the contracts of running back Karlos Williams, defensive back Travis Lee and and wide receiver Joel Blumenthal.

All three Americans originally signed with Toronto in late 2019.

Williams was selected by the Buffalo Bills in the fifth round (155th overall) of the 2015 NFL draft and rushed 93 times for 517 yards and seven touchdowns, while adding two more scores through the air in 11 games that year.

He’s looking to re-start his career after it was derailed by three suspensions for violating the NFL’s substance abuse policy.

Lee signed with Toronto after spending time with the Baltimore Brigade of the Arena Football League that same year.

He played six games for Hamilton in 2016, recording 24 defensive tackles. 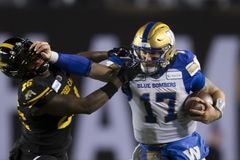 How CFL players are coping with no football season – and no Grey Cup
November 20, 2020 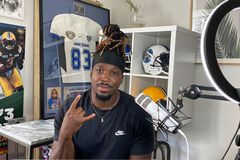