Last year, Andrew Luck made the Pro Bowl. Statistically, he was one of the five best quarterbacks in the NFL. His team, the Indianapolis Colts, made the playoffs and were among the Super Bowl favourites going into this year.

But although he is only 29, Luck retired over the weekend.

News of his decision broke while the Colts were playing a preseason game. Luck was sitting out of uniform on the sidelines. As he came off the field, Colts fans gave him a warm Indiana sendoff – booing him all the way to the tunnel.

That upset a lot of people in the way any visceral reaction upsets everyone these days. But you get it. Luck lives the dream life of every person in attendance at that game. Now he was telling them that their dream is, in fact, an awful grind. He’d rather do something else.

Nobody likes to be told their dreams are dumb.

“I’ve been stuck in this [rehab] process,” Luck said later. “I haven’t been able to live the life I want to live. It’s taken the joy out of this game.”

Like a lot of great quarterbacks, Luck was always smarter than the average bear. He has an architecture degree from Stanford. He is a famously avid reader. In one instance, a colleague recalled Luck breaking into a wider locker-room conversation to ask everyone what they knew about the Napoleonic wars.

“That was a first,” the teammate told The Wall Street Journal.

An analytic mind does not go well with football. Because an analytic person understands that every time he goes out on the field he is at imminent risk of being maimed for life.

In order to play pro football, there must be some element of self-delusion in your personality – “Someone will get it, but not me.” Once you get it, “What are the odds that will happen twice?” And when it happens twice, “Not three times,” and so forth.

I once walked the length of a long hallway behind Joe Montana. Montana was another smart cat who played quarterback well, but did so for a long time. He managed to avoid serious injury through most of his career.

In retirement, Montana looked like a man who’d just staggered out of a car wreck – slow, creaky, an uncomfortable side-to-side gait. The former 49er was in his mid-50s at the time. He moved as though he were far older.

This is how these guys end up, even the brightest, luckiest and best protected of them.

The only way to explain doing it for so long is that the players practise a brand of magical thinking. That they will be the lucky ones who escape unharmed, or that current glory is worth any amount of future pain.

Most 25-year-olds are heedless because, not having yet secured their present, they cannot conceive of the future. Football players take this ethos to absurd extremes. They are exchanging 40 hard years for five great ones.

It’s been more than a decade since we first heard about the connection between chronic traumatic encephalopathy (CTE) and pro football. We’ve spent most of that time wondering how it would affect the NFL’s day-to-day operations.

From the commercial perspective, it hasn’t. Despite a lot of hand-wringing in the media, revenues continue to rise. Teams are worth more than ever. The league remains one of the few institutions in the United States that enjoys support from either side of the culture wars.

Now that they could be sure the players understood the risks and chose to play anyway, they cared even less. Nobody wastes their time complaining about it any more. The progressives lost because the NFL was offering people football, community and the red-white-and-blue, while they were offering to replace all that with nothing.

But what we had not suspected was a fifth column within the NFL itself – the players.

A lot of guys have retired before their time. Barry Sanders quit at age 31, still at the height of his powers. His explanation was a functional shoulder shrug – “My desire to exit the game is greater than my desire to remain in it.”

But Luck is different. He is hurt now, but was apparently recovering. He’s not quitting because injuries won’t allow him to play. He’s doing so because he never wants to be hurt again. In this one case, the football spell has lifted. Luck could see his future, and he wasn’t in love with the idea that some of it might be spent in a wheelchair.

It’s tempting to wonder whether Luck is the thin edge of the wedge.

Unlike some fans, the wider NFL world isn’t jeering him on his way out the door. Cowboys owner Jerry Jones captured the generally fawning reaction when he said, “I hope he becomes the president of the United States.”

The Colts have allowed Luck to keep his many millions in signing bonuses – a magnanimous and cunning gesture. This team is going from very good to pretty bad in a big hurry. It needs all the positive press it can get.

But beyond the linked arms and slow claps as he leaves, you can see an existential threat emerging here. What if everyone starts thinking like Luck? What if guys who’ve played a few years and made enough money for a lifetime start thinking, “Is this really worth it?”

A league lives on its stars. Regardless of how good you are, it takes years to penetrate into the wider consciousness. That’s why, at 42, Tom Brady remains so critical to the league. He’s its one honest-to-goodness household name.

What if the next generation of superstars decide getting beaten flat for 20 years is foolish? Or 10? Or five? That makes the product difficult to sustain. It would force the NFL to be constantly rewriting its narrative, which is a tricky thing in the entertainment business.

So one Andrew Luck is charming. You’ll hear a lot in the next little while about how “different” Luck is, as if to suggest what he’s done is the result of a quirky outlook rather than a properly developed survival instinct.

But two Andrew Lucks would not be charming for the NFL. Three would start getting scary. 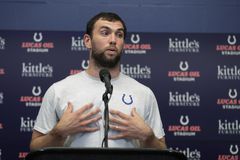