As the Winnipeg Blue Bombers watched St. Francis Xavier's Henoc Muamba on film, they had no problem imagining the six-foot, 230-pound linebacker fitting in with the Bombers' experienced corps, guys known for their ability to run and strike.

On Sunday, Winnipeg selected the Mississauga native with the first overall choice in the Canadian Football League draft, the first time the Bombers have held the top pick since 1975.

"I think Henoc is very comparable to a lot of import talent at this position," said Blue Bombers general manager Joe Mack. "Our [linebackers]are aggressive, we are known for that. That's a compliment to Henoc, thinking he can fit in with the ethos of those kind of players."

The 2010 CIS defensive player of the year and his school's career leader in tackles, Muamba was the first player from the Antigonish, N.S., university to be a first overall selection. The X-Men star elevated his draft status with a head-turning performance at the evaluation camp and further impressed the Bombers in interviews over the past few days.

"I was absolutely excited and overwhelmed and really glad about the whole welcome in Winnipeg," said Muamba, whose brother Cauchy is a safety for the B.C. Lions. "Now it's time to put in the work, as my brother told me, and I'm going to come into training camp with an open mind, ready to learn."

With its other first-round pick Winnipeg took University of Saskatchewan receiver Jade Etienne, a choice some experts thought a stretch at No. 8, considering the depth of receivers in the draft.

Elsewhere in the East, the Toronto Argonauts, who started the day without a first-round pick, traded up to No. 7 to take University of Tulsa offensive lineman Tyler Holmes. In a deal with the Saskatchewan Roughriders, the Argos gave up their selections from the second and fourth rounds (12th and 27th overall).

The Argos realize that the 6-foot-4, 305-pound Ottawa native may get an opportunity in the National Football League down the road but felt Holmes's versatility made him worth the risk.

"We felt Tyler Holmes was the best offensive lineman on the board and that the teams ahead of us would be looking at the offensive line," said Jim Barker, the Argonauts general manager and head coach. "This trade gives us a chance to get the guy we wanted and fill our pipeline."

The Grey Cup champion Montreal Alouettes made some noteworthy moves, drafting University of Montana kicker Brody McKnight eighth overall and rolling the dice on two of the draft's best-rated talents in later rounds, players with strong possibilities in the NFL. The Als took Baylor offensive lineman Philip Blake in the third and in the fifth, former UWO defensive tackle Vaughn Martin, who has already played two seasons with the San Diego Chargers.

"We could have taken a player there that we could have gotten into our camp this year, but there was no way to pass on Martin," said Alouettes general manager Jim Popp. "We thought, 'we'll take a risk here, whether we ever see him or not.' If we do, it will be a great, great, fifth-round draft pick."

The Hamilton Tiger-Cats traded away their first-round choice, No. 5, to the Edmonton Eskimos in exchange for a pair of second-round picks, 10th and 13th overall. They focused on line help in the second and third rounds, selecting offensive linemen Moe Petrus from Connecticut and Pascal Baillargeon of Laval, and defensive linemen Maurice Forbes of Concordia and Marc-Antoine Fortin of Laval. 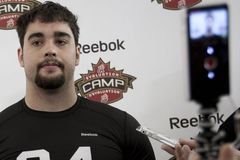 CFL's draft a much trickier dance than NFL version
May 5, 2011 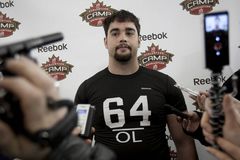 Anticipation mounts ahead of CFL draft
May 6, 2011 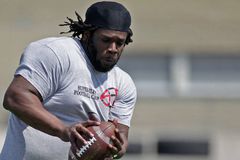 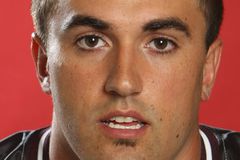