It was a West Division semi-final billed as the battle of the Plan B QBs, because that was as much as the Edmonton Eskimos and Saskatchewan Roughriders could muster.

Up for Edmonton was Matt Nichols, the 27-year-old reserve quarterback earning the start for the injured Mike Reilly. For Saskatchewan, it was Kerry Joseph, the 41-year-old retread who came out of retirement to fill in for the injured Darian Durant. At stake was a trip to the Western Final to face the Calgary Stampeders.

By the end of a frosty afternoon at Commonwealth Stadium, it was Nichols who did just enough to take Edmonton to a 10-point lead en route to an 18-10 win. Added to the victory was Reilly getting some playing time in the second half and an Edmonton defence that had its way with Joseph and the Riders.

"After we lost last week [to the Riders in their regular season finale] we made up our minds we weren't going to be pushed around again," Edmonton linebacker Rennie Curran told reporters. "It was a low-scoring game this time and we had to set the tempo … This is a huge opportunity for us."

There will be a new Grey Cup champion crowned later this month. The Riders accomplished one for the record books in 2013 by winning the Grey Cup on their home turf in Regina. That win had a lot to do with Durant being healthy and running back Kory Sheets running wild before signing with the Oakland Raiders.

On Sunday, Joseph entered the CFL record book, too. He did so by air-mailing five interceptions. He threw back-to-back picks in the first quarter, then added another two in the second quarter. He followed that with a 54-yard touchdown toss to Korey Williams in the third quarter. But after adding a fifth interception, Joseph was stapled to the bench and replaced by Tino Sunseri.

It was a performance in keeping with how Saskatchewan had played during a sometimes-awful, sometimes-good regular season. As general manager Brendan Taman had said before the semi-final, "We're a hard team to figure, and that's from within, too."

Here's how poorly the Saskatchewan offence operated, aside from the five interceptions: Joseph and Sunseri were sacked and pressured continuously; their offensive line was called for procedure and holding; nothing much seemed to work, even the running game. The Riders couldn't have done this poorly if they had practised it all week.

The Eskimos' biggest fault all game was failing to score touchdowns, given the turnovers they created and the field position they garnered. Head coach Chris Jones had worried about that lack of a finishing touch during his halftime interview. He was so worried that when Nichols couldn't throw effectively downfield, Reilly was sent in despite having a broken bone in his right foot.

"It was so good to get back out on the field," Reilly acknowledged. "You have to have confidence. Matt put us in a good position to win the game. There's always a little uncertainty [coming off an injury], but as the game wore on I felt more confident."

Reilly completed six of eight passes to settle things down. Both Reilly and Nichols were benefactors of John White, the Edmonton running back who carried the ball 19 times for 134 yards. White had blown up the Riders in their last meeting, but as good as the Saskatchewan defence was, it wasn't able to slow White, let alone stop him.

"He's a real good running back. He's damn good," Taman said. "To me, he's their Kory Sheets. If he's held in check, you've got a good chance of beating them. If you can't do it, it's awfully tough to beat them."

The Eskimos got their touchdown on an 84-yard punt return by Kendial Lawrence in the second quarter. The win was Edmonton's third in four games against Saskatchewan. It should send a ripple of confidence through the Eskimos as they now prepare for a visit to McMahon Stadium to play the first-place Stampeders.

Having Reilly and Nichols ready to play at quarterback, White to run the ball and a defence that can crush an opponent, the Eskimos have what they need to keep their postseason hopes alive, perhaps all the way to the Grey Cup. 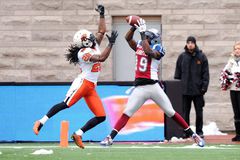 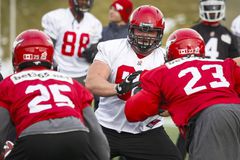 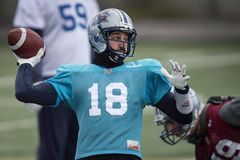 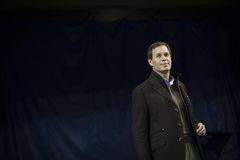 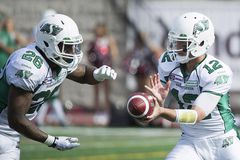 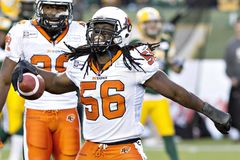 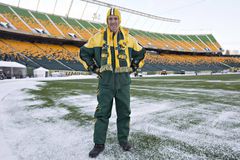 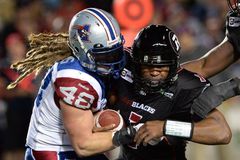