Andrew Landry made his first PGA Tour victory a home state affair when he secured a two-stroke win at the Texas Open in San Antonio on Sunday.

Texas-born Landry, who lives in nearby Austin, shot a four-under 68 to close out the win in his 32nd start on tour.

Starting the day tied for the lead with fellow American Zach Johnson, Landy charged out with birdies in his first three holes before parring the final seven to finish with a 17-under total of 271 at TPC San Antonio.

Niemann birdied the final three holes for a 67.

“Today was a grind especially on the back nine. We’ll take it,” a relieved Landry said in a greenside interview.

The victory came three months after he lost a playoff to Spaniard Jon Rahm at the CareerBuilder Challenge in California.

Landry, 30, burst onto the scene at the 2016 U.S. Open, when he led after the first round. He finished 15th after playing the final round with eventual winner Dustin Johnson.

On Sunday, Landry had to work hard to stave off Mullinax, whose hopes diminished when he chunked a pitch shot at the 17th, failing to clear a bunker between his ball and the cup.

The resulting bogey gave Landry the gift of a two-shot lead heading to the par-five 18th, where there was still some suspense, after Landry’s long birdie putt trundled eight feet beyond the hole.

That gave Mullinax hope of forcing a playoff, but he allowed for too much break with his nine-foot birdie attempt and had to settle for par. Landry had the luxury of knowing he could miss his par putt but sank it anyway.

He said his goal of qualifying for the season-ending Tour Championship, restricted to the top 30 players, had not changed.

“We still have a lot of work to do but this definitely helps,” he said. 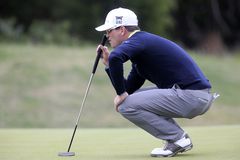