He's the Harvard-educated, Henry David Thoreau-reading, Stanley Cup winner who comes with a reputation for drafting big centres, his biggest being Dwight Howard.

Yes, that Dwight Howard, of NBA fame. Drafting Howard was John Weisbrod's handiwork during his time as CEO and general manager of the Orlando Magic. Now it's Weisbrod's duty to secure top talent, including a front-line centre, for a Calgary Flames organization in the throes of what team president Ken King calls "a quantum shift."

Under former GM Darryl Sutter, the Flames were essentially a one-man operation with a narrow view on hockey matters and scouting. Western juniors got top priority; Russians were ignored. Under new GM Jay Feaster, all options and opinions are encouraged, which is why Weisbrod agreed to leave a scouting position with the Stanley Cup champion Boston Bruins for a team that missed the playoffs last season.

"The [Flames]organization was like Boston's six years ago," Weisbrod said. "The Bruins were 28th in the league and had a lot of bad contracts. I enjoyed the way we broke it down and redefined what we wanted a Boston Bruin to be. That's what Jay's doing here."

Depth and diversity have sophisticated the way the Flames are going about their business. They not only hired Weisbrod, whose sporting background knows no equal in hockey; they enlarged their scouting staff, expanded their front office and put more emphasis on analytical software programs such as PUCKS and Decision Lens.

The idea, Feaster insisted, is to examine all the data possible and use them in decision making, be it for which players to draft or determine how best the Flames can defend against certain rivals.

"We're trying to be more scientific in what we do as opposed to analytical," Feaster said. "Decision Lens allows us to prioritize players we scout by whatever criteria we want. We pick the category – maybe it's by skating – and the program gives us its top-20 selections. PUCKS breaks down a game with percentage groups – where goals are scored from, league averages and it's attached to video. If we're contemplating a trade with Phoenix for Lee Stempniak, we can watch video of all his shifts against Western Conference teams.

"We're not pioneers, but I think more and more you're going to see [analysis work]done in hockey."

Feaster has cleared out some bad contracts (Ales Kotalik, Daymond Langkow) and has $3.6-million (U.S.) in cap space to upgrade the roster. His grand vision of what he wants a Flames player to be is simple yet valued: "We want smart, high-character hockey players who, despite it sounding cliché, play for the crest on the front of the jersey not for the self-aggrandizement of the name on the back."

Helping determine who those players are is a major part of Weisbrod's job as assistant GM of player personnel. A Harvard University English grad with a fondness for the classics, Weisbrod played hockey, but a shoulder injury ended his minor pro career. He found administrative work in the IHL, where he ran the Orlando Solar Bears. The Bears owner, Amway co-founder Richard DeVos, liked Weisbrod so much he named him president of the NBA's Orlando Magic.

Unfortunately for Weisbrod, he got off to a bad start with Magic fans. Instead of drafting Emeka Okafor, he went for Dwight Howard fresh out of high school. The result was garbage bags filled with hate mail, a sampling of the hostility that followed when Weisbrod traded Tracy McGrady to the Houston Rockets. For that, Weisbrod received hand-delivered death threats at his home.

"[McGrady]was one of the most talented players in the league, very popular, but I came to the conclusion he didn't have the internal fortitude to win a championship," Weisbrod said. "I went to the ownership and said, 'He can be Robin, not Batman.' The FBI moved me out of my house to a hotel under an alias [because of the public's anger]"

Weisbrod resigned in 2005, returned to the NHL and later joined the Bruins, where he was hired as a scout by former Harvard teammate Peter Chiarelli. Impressed by Weisbrod's résumé, Feaster got permission from the Bruins to talk to him. That was before the 2011 playoffs began. Once the Stanley Cup was secured, Weisbrod listened to Feaster and saw another chance to redefine a franchise.

"The Flames have been one of the worst drafting teams in the last 10 years. We have to change that," Weisbrod said, referring to the fact Calgary has developed only one first-round draft pick for its 2011-12 roster (centre Mikael Backlund). "We have to have open-mindedness about where guys come from and we have to find them. You certainly need talent to fill the skill sets, but we're going to be focused on the intangibles in what people are bringing."

For Feaster, that means believing in the process and the people he's brought in.

"I run a participatory democracy," Feaster said. "Of course, the ultimate decision rests on my desk. But I don't want to cut off opinions. I want to hear that." 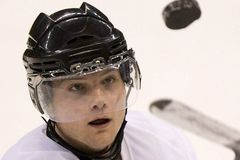 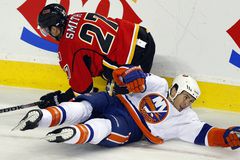